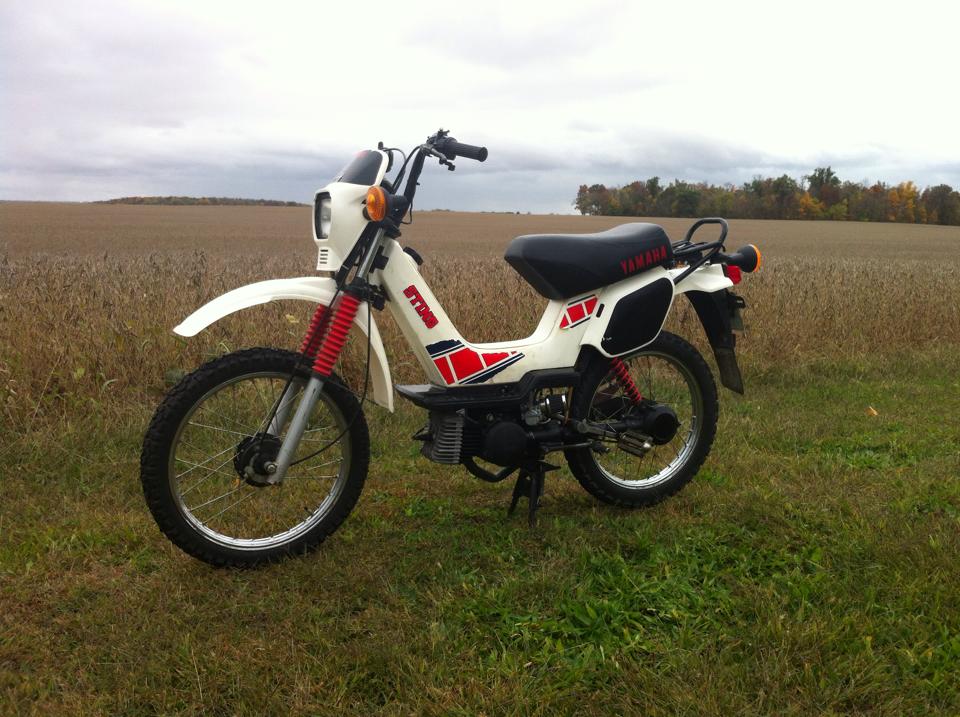 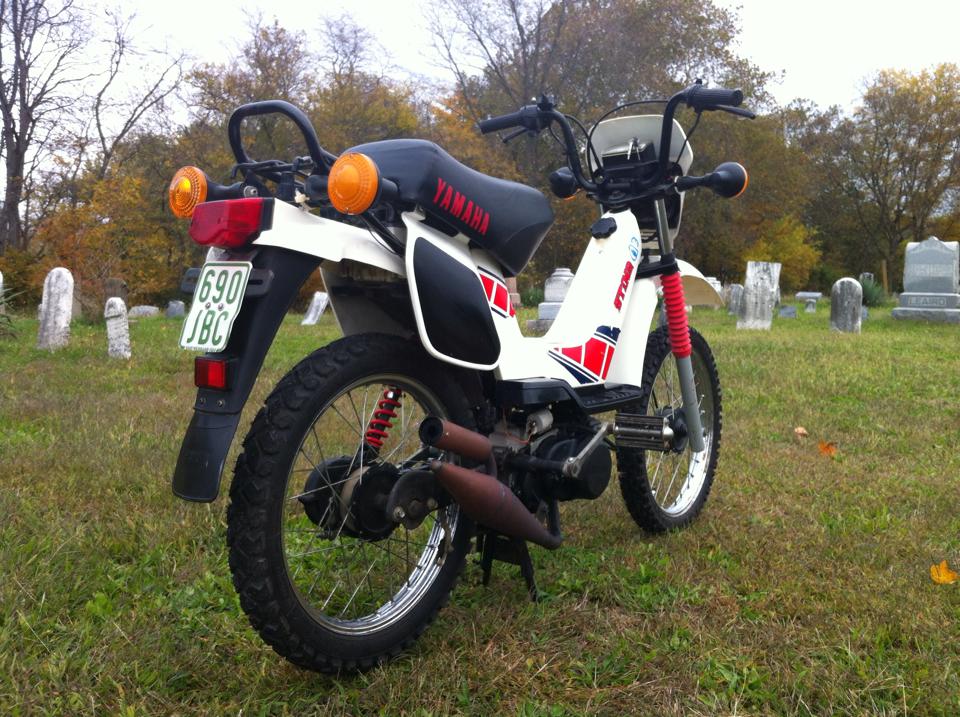 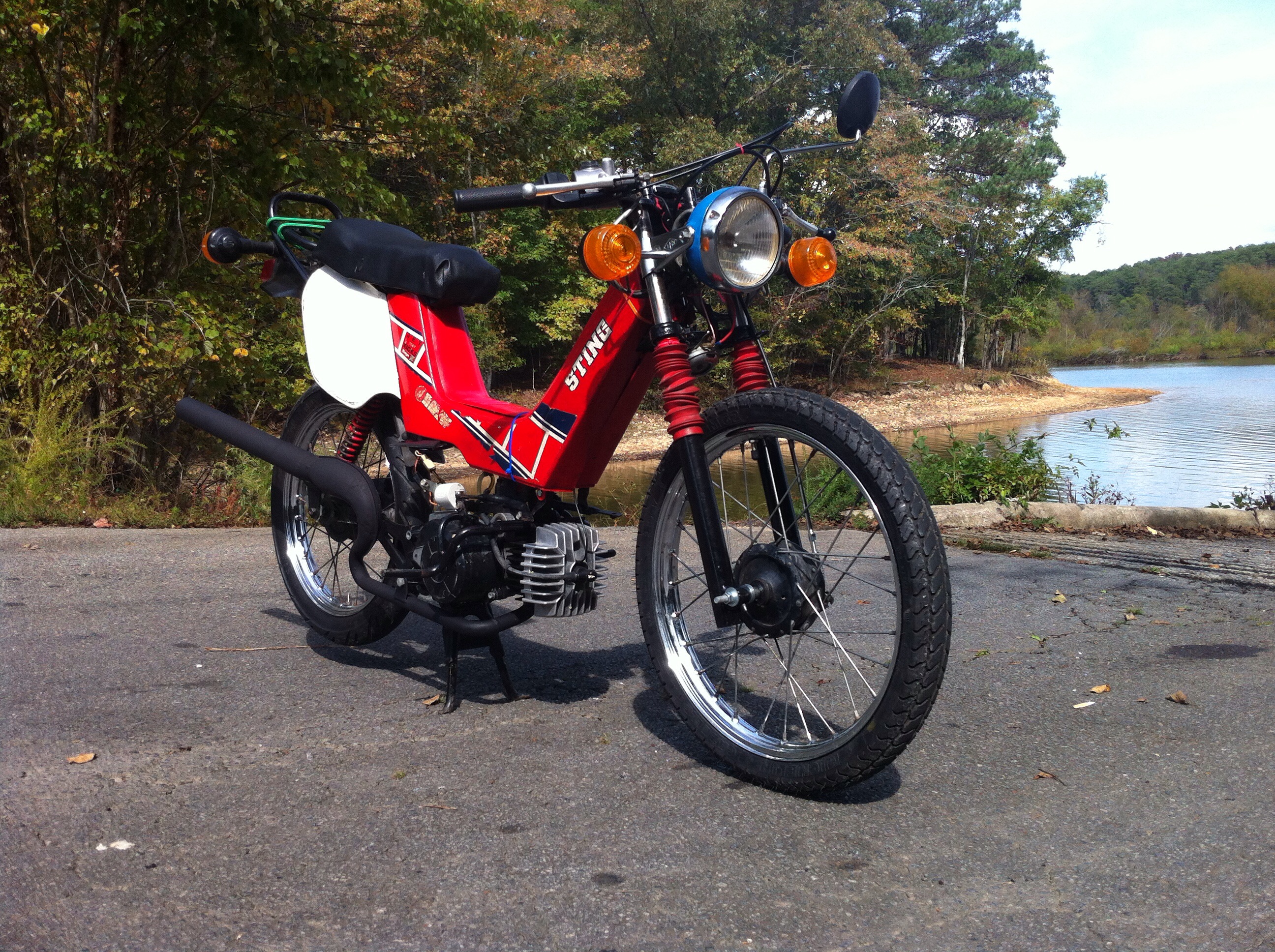 The Sting was never imported into the U.S. All Stings that are here were privately imported. Many come from Germany. According to reports, there are less than 20 in the U.S.

Most do not have pedals, making them not a true moped. However, pedals were an option, as seen in the picture of the white Sting. So, pedals make them a moped...

They have been called a "dirt ped" since they have a definite dirt bike styling influence.

Engine is a 50cc with a driveshaft and differential setup mounted on a swing arm, similar to the Yamaha QT series. Many parts are interchangeable, though the Sting does have a significantly longer driveshaft.

Brochure is in German.

User manual was in English, German and Dutch. Only the English section is included.

The following is for an MJ Towny, but similar engine and wiring:

The following is for a QT50, but also similar engine and wiring:

European parts manual that shows all parts and part numbers in English:

Cylinder kits for the QT50, YT60, MJ50 and SG50 all are basically interchangeable for the engine. That means you can keep the stock 50cc, or upgrade to 60cc using factory Yamaha cylinders. There are also a few 70cc kits as well.

Both Stings pictured have the Malossi 70cc kits.

Malossi makes a 70cc cylinder kit specifically for the Sting:

Motion Left makes a bolt on intake for the Mikuni VM18:

Exhausts for the QT50 do exist. Motion Left makes one, as well as Jemco. These can be adapted to the Sting with some work. It is also rumored that Tomos A35 exhausts work with modification as well.

The white Sting has a MLM sidebleed exhaust made for a QT50. The red Sting has a custom exhaust using a Giannelli expansion chamber.

This thread gives some theory:

These threads relate to Sting performance:

The stock Sting CDI box appears to be a fixed timing CDI - meaning that it does not change timing and has no timing curve to speak of. This may cause cylinder and head temps to climb higher than wanted, especially on long, high rpm blasts.

A common modification among the QT50 crowd is the Yamaha Jog/Zuma 5 wire CDI box. It has a high rpm retarding feature that keeps the temps down by retarding the ignition timing as the rpms increase. However, this 5 wire box DOES NOT work for the Sting. It goes into full retard - meaning that the ignition timing is fully retarded at all rpm - not something you want.

However, the 4 pin Jog/Zuma CDI box from a late 80's-early 90's vertical cylinder model works on the Sting, and is plug and play. It appears to have a retarding curve as well.

The front forks are substantial, with very thick tubes and stiff springs. They are easily disassembled by removing a circliip at the top of the "strut" assembly and removing the insides. Shortening the tubes is easily done. The red Sting pictured has 4 inches cut out of the tubes, allowing full suspension travel while providing the lowered look.

The factory uses loose ball bearings in the headset. However, the Puch 26mm caged headset bearings work almost perfectly as a replacement and upgrade.

Some Stings came with a rear mono shock mounted to the driveshaft side of the swing arm. Others came with 2 rear shocks. The mounting points are said to be there regardless of model.

Shock length is 11 inches. There are decent quality replacements available on eBay for under $80/pair. Otherwise, it appears as if 10 inch will work as well, providing less off-road appearance and still allowing proper clearance at the rear tire.

PW50 gears can be interchanged to alter the acceleration and top speed.

This wiki page is written and updated by Cynical1

Both Stings pictured are currently mine. So, I guess I'm the only guy in America with 2 of them...

I am slowly modifying them, learning about them, and updating. Feel free to correct me if any info is wrong.