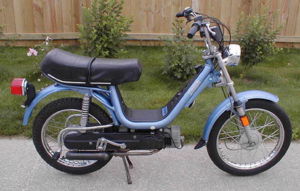 The Grande (meaning large) was made for the USA only and was designed to carry two people with it's extra long seat and retractable rear foot pegs. It came with a 2 1/2"x17" front tire and a 2 3/4"x16" rear tire both with different tread patterns (they were available with spoke wheels and mag wheels on later Grandes), automatic variable transmission, telescopic front fork suspension, and rear hydraulic shock absorbers. The base models speedometer was mounted externally and to the handle bars, whereas the deluxe speedometer was mounted inside the headlamp assembly. Base models also had one engine run/stop switch mounted to the handle bars, in comparison to the Deluxe models having a switch on the handle bars and a separate removable "igintion key" also mounted in the headlamp assembly. All models had an option for front and large rear luggage racks in chrome or black paint. Grande also came in 20, 25, and 30 MPH versions, easily determined by the black and white sticker found on the right side of the sub frame with the side cover off stating 20, 25, or 30. Other parts for each version had MPH identifications in the respective part numbers. All Grande came with a spring loaded chrome front "crash bar", or "foot rest", not found on other Vespa. All Grande seats lifted up which is where a tool kit that was found inside a plastic tote, as well as the oil cup.

The Grande was also available as the "Grande Super Deluxe" which came with turn signals and two side compartments. One housed the battery and flasher for the turn signals, and other was for a tool kit and storage.

The Grande Deluxe was a later model and came with an oil injection system; these are very rare. There was also a European version of the Grande, called the CBA that game in several styles all with the standard motor used on other models. While it's predecessor, the CB1 had a Gilera specific motor that came in 4 and 5 speed variations, early motors producing roughly 7hp.

Due to the Grande's tubular style frame with integral fuel tank, the fuel tank was a unique design which resluted in slightly less fuel capacity then other Vespa. Two large steel tubes were used for the frame with a lower crossover pipe, connecting both tubes. To fill a Grande with fuel, the seat must be lifted and a bleeder valve must be opened to bleed air from the tubular frame while fueling. Once fuel was released from the bleeder valve, the operator then closed the valve and continued to top off the tank with fuel. This bleeder valve was not found on any other Vespa. Under the seat also contained a plastic oil cup and bracket and the oil cups are commonly missing items on these bikes now a days. There is currently no source to buy them new either.

The Grande's cylinder head had a different look to it not used on other Vespa. Grande's also had an externally case mounted condenser, which made changing easier due to the case not having to be pulled and opened to access. Models with turn signals used a two wire condenser, base models used a single wire. All Grande also came with the largest carburetor a 12.12 SHA and a separate air box cover screwed into the air box.

The most basic/common upgrade is a light performance exhaust, and a 13mm carburetor perhaps with a performance airbox such as the Malossi hi flow filter, and some variator tuning. No external carburetor adjustments can be made other than adjusting the idle screw. There are also "free" mods that may be done for a few extra MPH.

Further tuning with cylinder kits and high end pipes will result in a very fast bike.