Here are just a few notes about installing the 75cc Mec Eur or even the 75cc Polini kit. I'm no expert, but after screwing things up a time or two, I can at the very least give some golden advice to the many people out there thinking about or about to install one of these kits. The overall gist: This is not a bolt-on immediately kit. Even if it did immediately bolt-on, you will be looking at some serious problems without some work.

Assuming you have all of the numerous problems worked out on your VIP, Avanti, Gulp, etc, you may very well be ready to install one of these kits. The very first thing you should notice when you get one is that it is somewhat poorly made. The casting has a few flaws, the ports are very sharp and not chamfered, and sometimes (in my case, 1 out of 2) the stud holes are not aligned properly. To be clear, this kit can be made to be very powerful and will most definitely have adverse effects on your clutch system. If you fix your clutch to the point that it is tight and with proper oil and oil level, you can minimize damage over time to a manageable level. I often tell people about their clutch systems and how important it is to maintain them as to not have them broken within a month or two.

You need to get a good idea of how your current system works and keep in mind your configuration before installing a larger bore kit. The idea is to get the bike to have the low incidences of hard shifting coupled with the lowest incidences of slipping the clutch rubbers against the outer bell.

Concerning: Too much oil

With too much oil will cause more "slip" on both gears which can be nice for smooth travel, but will have intensified effects on the clutches depending on the overuse of oil. Most of this damage has to do with switching gears and high torque situations. Too much oil can limit your ability to shift into 2nd in some situations. In extreme cases, one may find themselves slipping the 1st speed clutch on a large hill (high torque situation, especially with 65cc & 75cc performance setups). The following are some situations where too much oil is being used and it's long term effects:

Situation 1: High performance moped sounds like it's revving up faster than the moped is accelerating.

Cause: The clutch is slipping.

Effects: In extreme situations, you can get a smear of hot rubber on the inner or outer bell. Early stages of this will cause the bike to have violent shuddering and jerky shifting which wears out the metal clutch engagement and bell. Excess rubber can also clog oiler holes and can potentially seize the clutch to the shaft. Lots of excess rubber can bind into large pieces and cause all sorts of damage.

Fix: Drain some oil and test it some more.

Concerning: Too tall gearing at normal to low oil levels

Two speed Garelli motors will downshift on large hills - While it's great to have an automatic transmission, it's important that one pay attention to the nature in which the moped downshifts since it can potentially be just as jarring as up-shifting.

Situation 2: The moped traverses up a hill and can accelerate into 2nd where it bogs down and remains in gear despite it's inability to climb the and decelerates until it dies.

Causes: With tall gearing, you can expect some hills that the bike will not be able to overcome after shifting into 2nd. With too little oil, the bike attempts to stay in 2nd until it dies.

Effects: This mostly just inconveniences the rider into having to push the bike uphill - UNLESS the rider is clever enough to lay off the throttle for half a second and trick the bike into 1st. This can feel really badass, however extremely jerky on the heavy clutch setup. Depending on the moped power output, this action will wear out the metal pieces and rubber quickly.

Fixes: Try some more moderate gearing. It's tempting to want a blast all over the place on these fine machines, but when it comes to reliability, stick with something that can get you into and out of 2nd speed without a lot of this in-between dead zone that only causes clutch nightmares. Mid-range pipes can potentially help you stay in 2nd, while low end torque monster pipes enjoy riding you into 2nd and jerking back to 1st gear repeatedly causing a lot of damage.

Same old story, jerky/early shifting — even into first. Add some oil and test.

These noises are sometimes from extra play between your engagement plate, cross piece, and your outer clutch bell. Although these parts start out touching each other, lots of high torque takeoffs and poor shifting will cause their surfaces to mushroom and their distance between each other ever increase. In turn, the space between the parts allows them to move much more independently causing them to clank and clink even harder, eventually breaking the engagement plates' inner connectors and damaging the integrity of the outer bell. It is best to get the mushroomed surfaces welded and ground back to their original state before they become an issue. One way to ensure these parts stay linked is to use pop rivets. 3/16 aluminum rivets have worked for more for a number of years. They simply need to be inspected regularly and drilled out during clutch maintenance.

Be sure that your clutch engagement cable isn't too tight. The VIP suffers from having a really picky clutch engagement - just a little bit too loose and it won't engage, a bit too tight and then you have a problem that can go unnoticed. Not only will you wear our the nub quickly, but with the clutch even partially engaged, the metal clutch parts will take some undue stress. If the bike is bogging down or cutting out when you stop, then you may have this issue.

The kit will absolutely not fit in the case.

The case will need to be ground or cut to make room for this enormous kit. Pictured is the area that needs work. I won't go into much detail, this type of work is pretty serious and there are different methods, some easier than others. All I can say is that you don't have to take a lot of material off, the kit just needs to fit inside the case and you cannot under any circumstances leave shavings, dust, sand, or other impurities in the case. If you aren't confident that you can do this, don't bother, you will ruin the kit or the crank. If its your first time, just ask around about how you should do this. I got some really good advice and it worked awesome, but I'm not confident that everyone can keep the metal shavings out of the case, so you might want to just split the case and work at it like that. DO MEASURE BEFORE YOU SPLIT THE CASE. Get some tools and be sure to do it right, that's all I can say. 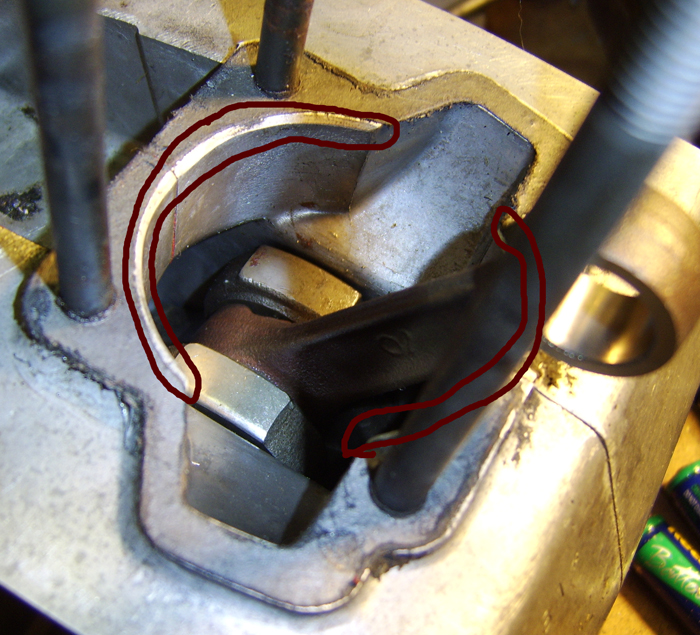 This kit doesn't seem to be cleaned up from the factory in any way.

The ports and skirt all need chamfered. You can get tiny files anywhere. If you don't know what "chamfered" means, don't go crazy and just start filing away. Go read up on the process and don't overdo it. 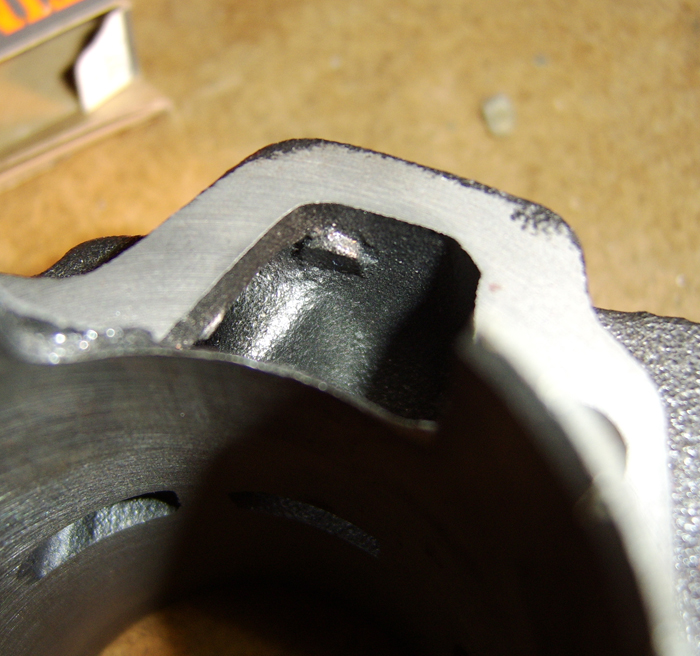 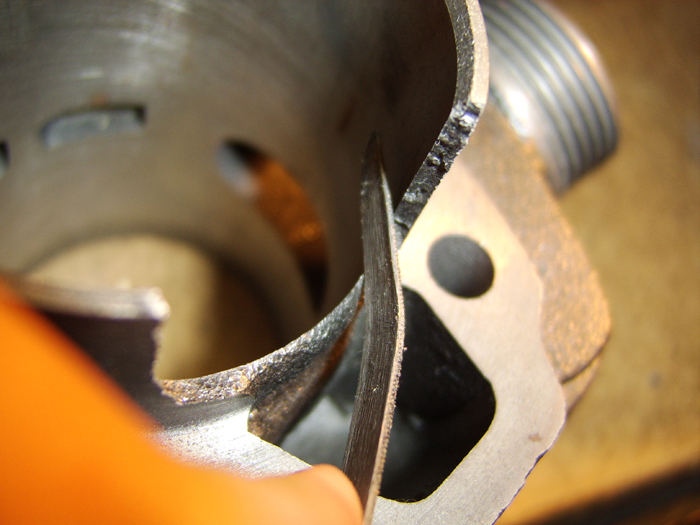 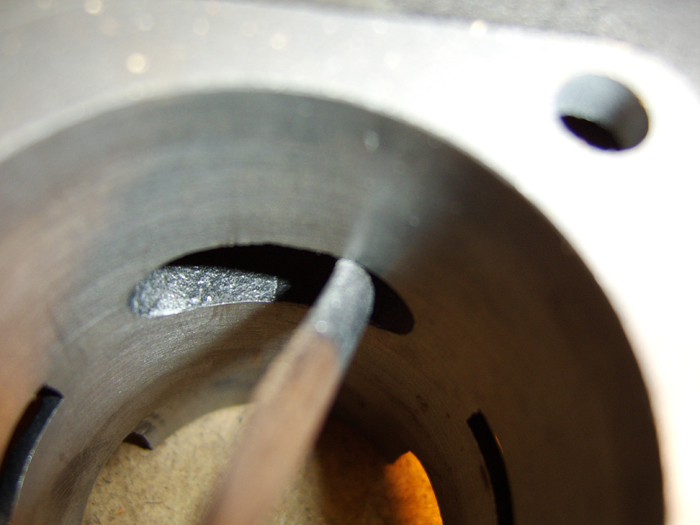 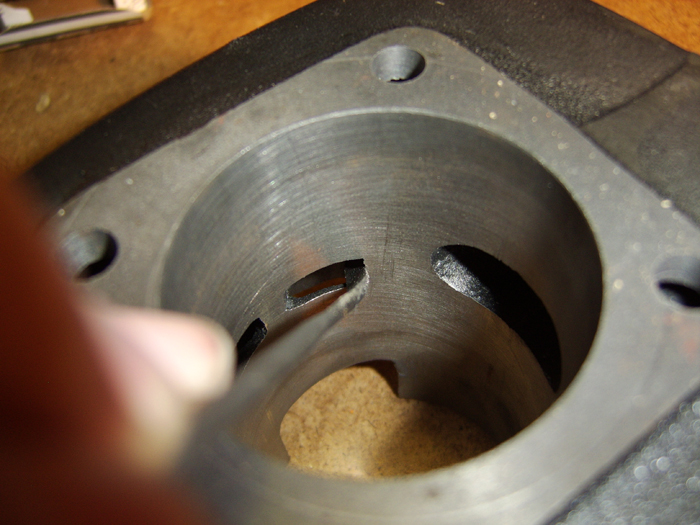 On one of the kits I have, the cylinder does not fit very well over the studs. It is tough to get onto the studs and will not slide down them without a lot of force. The holes will need measured or eye-balled and filed down so that they kit goes into the case smoothly without almost any force at all. 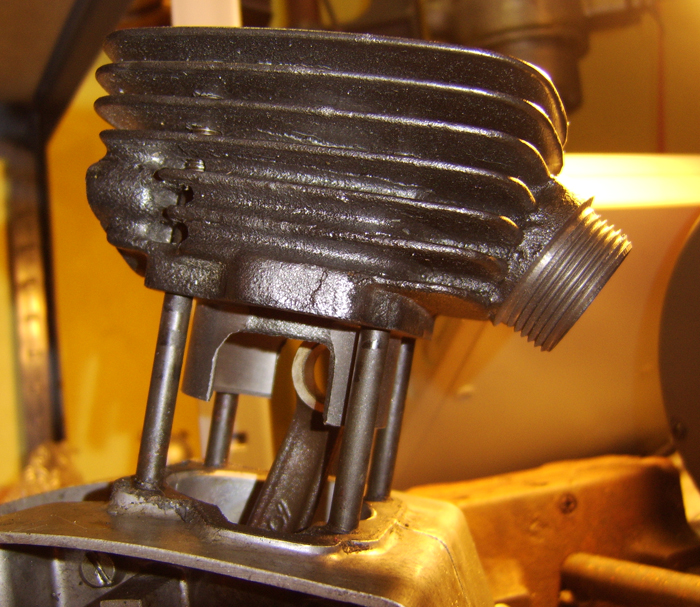 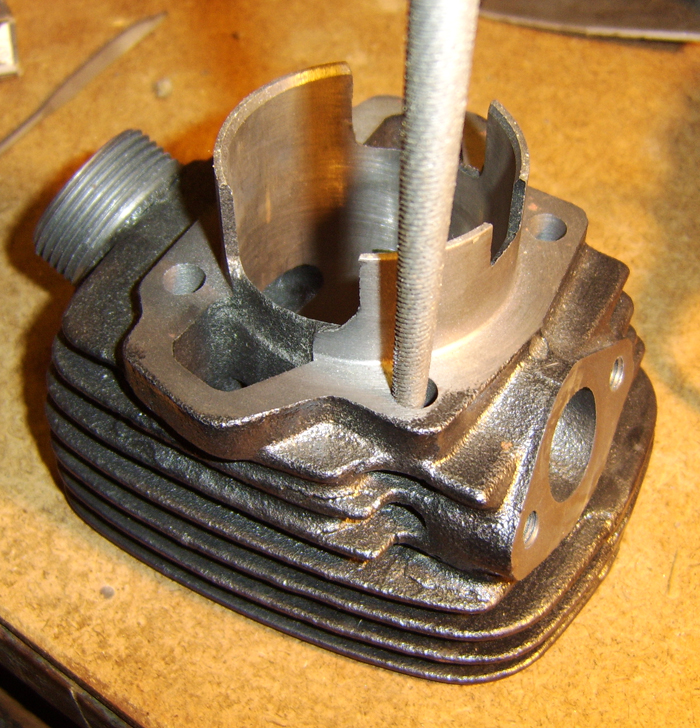 You may or may not know that there is indeed a gasket inlaid into the head. Sometimes it's impossible to see the gap between the head and the gasket, but it is most certainly there. You can pull this out with a pick and then install the gasket that comes with the kit. Unfortunately, the gap left over is not ideal and the geometry isn't great. The gasket can also move around within the gap and it may not make a good seal. If you feel up to it, you can figure out a way to mill down your head and cut yourself a squish band for a little more power. When I did mine, I left the outer ring left over from the original gasket so that I may insert a copper wire to ensure there isn't a leak. For now, I have just been putting gasket sealer in the ring.

When I was young and stupid, I didn't know that there was a gasket there. Instead, I just installed the head without this seemingly useless gasket and ran the hell out of the kit. After a while the bike started to knock and ran sorta bad, but what the hell, it was rally season and I was having fun. In Louisville, it suddenly made some scary noises, some clanking around in the cylinder, so I stopped, got it on a truck and got it home. With all the pressure between the head and the cylinder, the inner leftover part of the original gasket started bending inward toward the piston. It would heat up and the bike would then pre-ignite at high RPMs causing the knock. Eventually it bent inward so much that the piston would bang against it. Eventually parts of the original gasket broke off into the cylinder. Luckily it didn't do a lot of damage and I got the bike home, only to chip off the rest of the original gasket and ran it some more. (Pictured first) Later, I wanted to get some more compression so I decided to sand down the head and cut a squish band. It works great. (Pictured last). 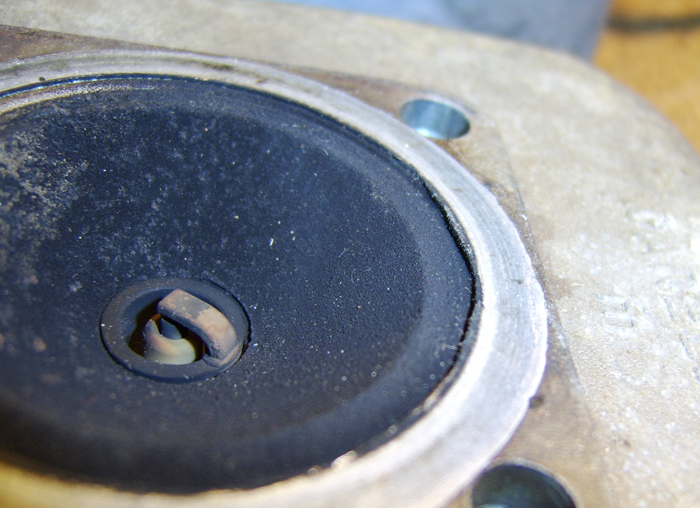 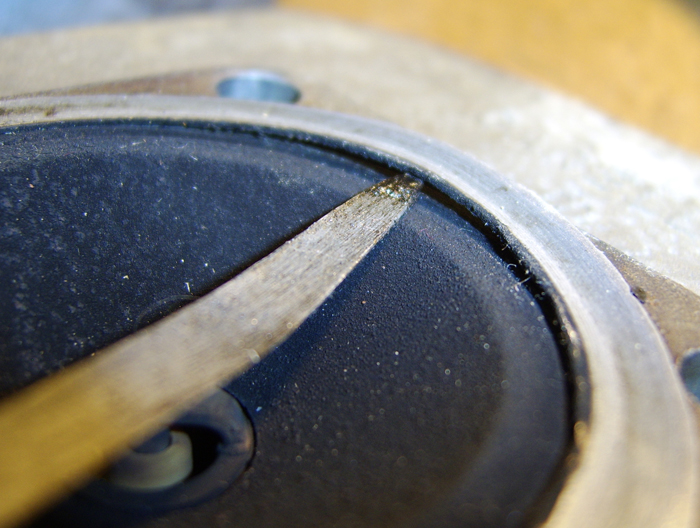 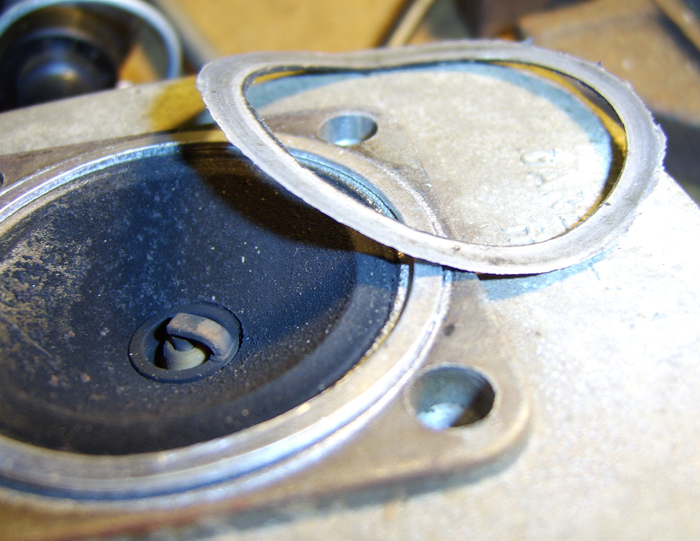 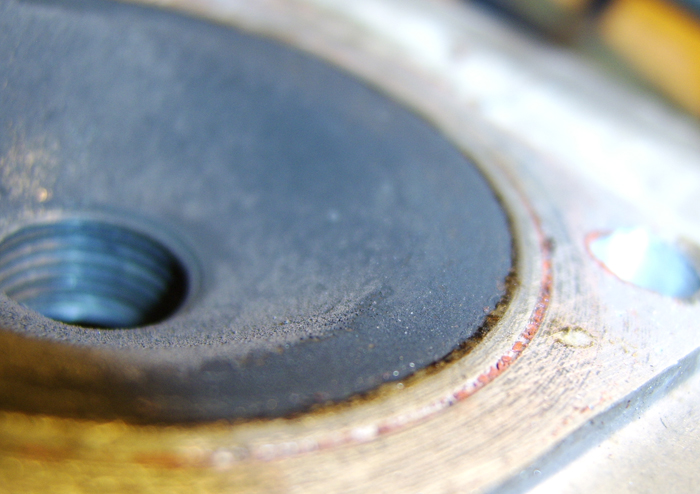