UNHOLYsmokers represent the capitol city of Madison WI. You'll know its them by the chorus of two stroke as they darken the sky with a mushroom of blue smoke. There may also be a lingering smell of marijuana and opium. All members take the "Oath of Mashin'" written by club founders while under the influence of DMT. It is still widely debated as to whether UNHOLYsmokers are drug addicts with moped problems or moped addicts with drug problems. It appears we are a feeder group for MA (members have gone on to ACR and HNRz). 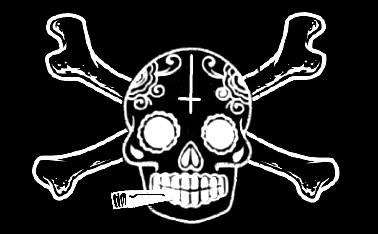 This flag was adopted in early September 2009. Created by club founder Ben.