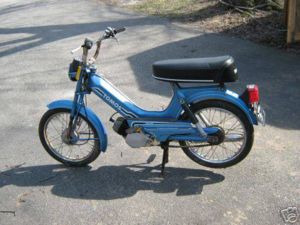 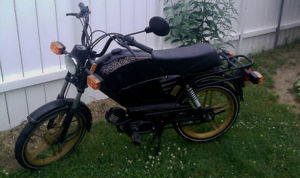 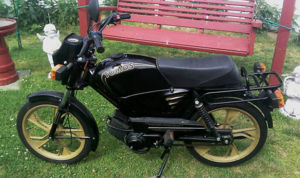 The Tomos Bullet was sold in the U.S. from 1977 until 1993. It is a continuation of the earlier Automatic models and the precursor to the current classic lineup. There are few variations of the Bullet. The standard Tomos Bullet came in a number of metallic colors including red, brown, green and blue. It also featured chrome spoke wheels. The Bullet ts was the same as the standard bullet but had the addition of turn signals. The Silver Bullet came with silver paint, black mag wheels, chrome fenders,turn signals,oil injection and a luggage rack. The TT Bullet is a basic top tank model. The Golden Bullet is a black painted model with gold mag wheels, oil injection and turn signals. The Golden Bullet TT LX or TT LX has the same features as the Golden Bullet but with a top tank chassis.

In 1992 The golden bullet models received the new A35 engine. (A few of the very late 1991 models had also received the A35) The 1992-1993 A35 Bullet was available in a step through and top tank model came in white with blue/pink/orange decals/ with white swept spoke mag wheels instead of the 5 stars found on the Golden Bullet. The Bullet model name was phased out in 1993 and was replaced by the Tomos Sprint, Tomos ST and Targa and Tomos LX and Targa LX models. The engine used on 1991 and earlier Bullet models is the 50cc 2 speed automatic A3 engine.