The JCPenney Swinger was basically a cheaper model of the JCPenney Pinto line of mopeds, manufactured through a partnership between Kromag and Puch for sale through JCPenney catalogs in The United States. The Pinto and Pinto2 both had tanks with chrome tops on them, while the Swinger2, although otherwise identical, didn't. Swinger2's were available in red, orange, and yellow.

The bottom of the line JCPenney Swinger is, ironically, the most sought-after and expensive to find today. Badged the "Swinger1", it was fully rigid, only came in blue, had a traditional spring-loaded saddle and came without a speedometer. It shares the frame of the rigid Free Spirit, but with shorter forks, a different tank, and a slightly darker shade of blue paint. Both the Swinger1 and the Swinger2 wore decals stating the model variation on the gas tank.

All parts are interchangeable between the Swinger2 and the Pinto. All three model lines used the Puch E50 engine rated at 2hp across the board.

Strangely enough, although the bikes were made in Austria, no european Puch models ever utilized the same frame as the Swinger1. 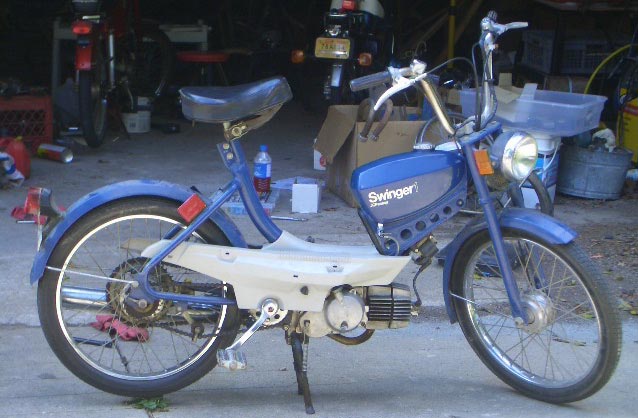