I've created this to address the differences between the many different Sachs motors. I've focused on the 50# series moped motors, but some other manual and vertical cylinder moped motors exist - please feel free to add any additional details. The "#" symbol is put in place where different number designations may apply equally. Some of the other Sachs moped motor types are detailed here [1]

The numbering scheme is as follows:

For example: the most common would be the 505/1A which has the longer "5" bottom end, "1" speed transmission, and an "A" speed rating, with corresponding "A" carb, intake, cylinder and exhaust. 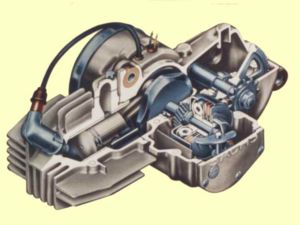 504 is a shorter case single-speed bottom end. They're most common on the Sparta Foxi mopeds among other bikes. Notable differences include the use of a smaller flywheel and magneto, and the shorter case does NOT include the pedals within the motor. The clutches, seals, topends and internal gearing (with the exception of the pedal drive gears) are shared with the other 505 motors. The 504 case is basically just a shortened version of the 505.

The crank does have a different taper on the flywheel side. The 504's have a shoulder right after the area where the bearing and seal are, and then it's smaller from there. If you want to use a 505 crank in a 504, you will need to use a small diameter flywheel with the standard puch/tomos/everythig taper like from a Derbi, or an HPI mini-rotor. Alternately you could cut the case so the 505 flywheel is out in the open. Then set timing accordingly. 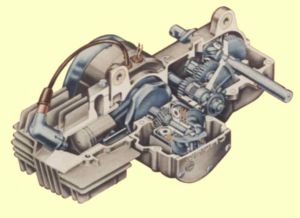 505 is the most common Sachs motor and is found on a wide variety of bikes including Sachs, Hercules, and some Generals etc. The 505 has the same size large Bosch flywheels as the Puch mopeds, and the taper also matches so these can be interchanged. The 505 includes a pedal mechanism within the motor and so the pedals drive the main gear and turn the rear wheel through just the one chain. On most (but not all) 505 motors, there's an internal back-pedal engagement which pulls a lever by the right crank arm to engage a coaster-brake when backpedaling. The clutches, cranks, seals, topends and internal gearing (with the exception of the pedal drive gears) are shared with the other 504 motors.

Manual shift The 2 and 3 speed manual shift motors are slightly different. The cases are actually identical except for which of the holes are drilled out. The 2 and 3 speeds have a hole (which is present on the 1's but undrilled) on the top to allow the gear selector to pass through. They also have the starter cable hole in the transmission filled in, and instead have a manual clutch lever atop the transmission. These also have a cable stop on the intakes for the clutch cable. The topends, cranks, clutch bells and pads&plates, the ignitions, and internal drive and pedal gears are all shared with the other 50X motors. Other differences are adressed later.

There are 2 different 505 cranks. All take the same seals and bearings, can use the same flywheels and clutches and fit in any 50# case. By far the more common is the "short" or "A" crank which came in sachs motors designated 50#/#A, B, or C. The stroke is 42mm and with the standard 38mm bore of all the sachs cylinders gives ~47cc and ~8:1 compression ratio.

The "D" designated motors are higher horsepower and use a longer ~44mm stroke crank. The position of the connecting rod pressed between the counterwights of the crankshaft is positioned differently on the 505/1D, to allow a longer stroke. They are fully interchangeable in all 50# motors. The D crank's longer stroke raises compression from ~8:1 to 10:1 giving more torque, and also raises displacement to 49cc. Many late model european motors, even with a low power rating such as "BX' use the longer 44mm crank. NOTE: While the numbers on the conrods may be different THE CONROD BETWEEN AN A AND D ARE THE SAME. There is no difference in conrod length, that does not affect stroke. Stroke is affected by the position of the big end bearing on the crank.

As noted above: The 504 crank is different. You cannot use a 505 crank in a 504, and there is no "D" length 504 crank. It has a shoulder right after the area where the bearing and seal are, and a smaller taper from there. If you want to use a 505 crank in a 504, you will need to use a small diameter flywheel with the standard puch/tomos taper such as a Derbi ignition or an HPI mini-rotor. Alternately you could cut the case so the 505 flywheel is out in the open. Then set timing accordingly. More detail here: https://www.mopedarmy.com/forums/read.php?1,4257783

How to tell the difference

Obviously you'd want the D, and you can tell if your crank's a D if the engine tag says 49cc instead of 47. Looking at your motor there's a metal tag above the flywheel on the top right side. This will indicate engine model (ex: 505/1A) as well as the displacement (47 or 49cc, sometimes "50"). If it says 49cc you have the 44mm crank - even if it's a B designated motor. If it says 47cc you have the shorter 42mm crank, even if it appears to be a D. Sometimes however, the cranks may have been swapped before or you're buying one randomly, or maybe you don't have the tag.

Also you can tell which crank just by looking at them if your engine is open or you have a crank in hand and not installed. The longer stroke is accomplished by pushing the big-end pivot farther out on the lobes of the crank. 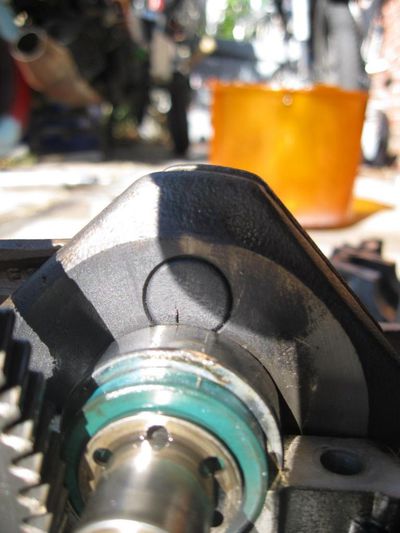 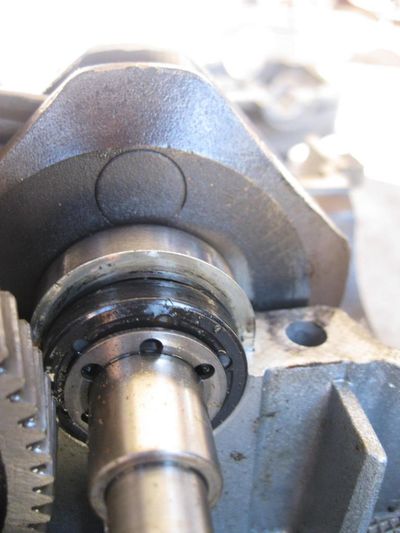 The topend, or "jug" of the Sachs motors holds the greatest and most commonly encountered differences. The differences are expressed in the letter designation as follows 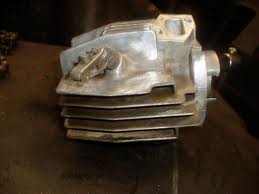 A or B angled taper jug

A The "A" is the most common of the 505/504 series engine. It's distinguished by the tapered cylinder marked 40kph. A stock horse power rating of 1.8. These invariably come with the shorter crank. The intake port is angled like the B but unlike the flat port on the C and D, and comes with a 14mm diameter intake.

B The "B" is the most restricted engine. They have the same tapered cylinder as the A and are usually marked 35kph. They also use the shorter crank and have very restrictive intake and exhaust porting and a hp rating of 1.5hp. The B motors also came with restricted small 20mm diameter exhaust and 10mm carburetors. The stud spacing is different from the other jugs to prevent easy swapping of parts, though simply elongating the holes in any other Sachs jug will allow it to be fit onto the B bottom end. The kits all come drilled for both stud spacings. Replacing the jug, carb and exhaust effectively converts these to an A or C motor. The intake port is angled like the A but unlike the flat port on the C and D, and comes with a 12mm diameter intake.

C The C is a rare square taper jug similar to the "D". The porting is somewhere between the A and D, and uses the shorter 42mm crank. The horsepower rating is also 1.8, same as the "A" however they're reported to be more powerful. The intake port is flat unlike the A and B, and comes with a 14mm diameter intake. 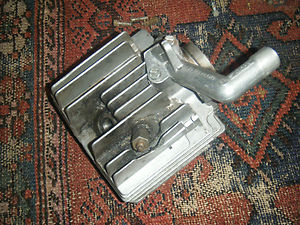 D The D is a very sought after sachs motor which can be a reliable and fast. The porting is generous for a stock cylinder, and the D uses the longer 44mm crank giving it a higher compression and displacement. They were also paired with a 26mm diameter exhaust and a unique 12mm square bing that has no needle. They were given a 2.7hp rating from the factory. The intake port is flat like the C and comes with a 14mm diameter intake.

2/3B,D These are the more common older 2 speed cylinders, A and C designations are not typically found on 2 and 3 speed manual motors. The 2/3B with no other designations use a unique restrictive square-taper jug, externally similar to the C or D but ported similarly to the "B" jug. The have an angled 10mm intake, the B stud spacing, and the shorter 42mm stroke. A 2-speed D also exists similar to the "D"'s. 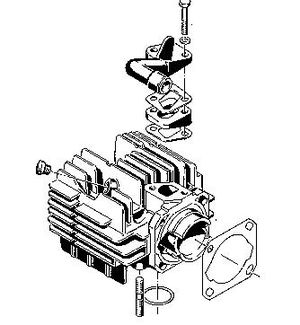 BX, BY, BS These are unique European cylinders. The BX is probably the most common jug found on later model European motors and on many manual shift 2 and 3 speed motors. These use the 44mm crank but are even more significantly restricted to keep the 1.5hp rating. These have flat port intakes, often with an angled adapter. They have a different looking square jug that has a vertical groove along the fins on the sides. The BS is single ring and BX dual, both are intended to have 1.5hp but the BX has a higher RPM peak. The BX features unique removable transfer walls inside the cylinder and is in general quite restrictive. The BX also has a flat exhaust port which fits bolt-on exhausts like from Puch Tomos or Garelli, etc.

DS DS are rare highoutput european D cylinders. These have a grooved square-taper cylinder like the BX and uses the 44mm longer crank. The DS is an even higher speed D cylinder with a single ring piston and the flat exhaust port.

/1# These are the most common, it's a single speed automatic and was used in almost 100% of the bikes imported by dealers to the US. More info can be found in Sachs clutch modifications. The 1's use a donut spring which springs out as RPM increase to press together a series of clutch plates and pads and drive the final gear. These are fully interchangeable between all of the motors. The most common use a 5 piece clutch, with 3 clutch plates and 2 pads, whereas some D's and also later European models use a 7 piece clutch with 4 plates and 3 pads. The engine's drive ratio is typically 4.05:1.

/2#, 3# These are the 2 & 3 speed motors, and are almost always manual shift. The manual shift cases are different as mentioned before, but can be converted by drilling and filling the appropriate holes, which are present in all of the cases; info on converting can be found also in Sachs clutch modifications. The 2-speed uses a gear selector between 2 different internal gear ratios (or 3 for the 3-speed), selected after the clutch. The clutches are by default pressed together and disengage when the clutch lever is pulled. They use exactly the same set of pads and plates as the automatics, and may be either 5 or 7 pieces, but with a dished spring in place of the donut spring and a set of pins to press them apart with the lever. They use the same bell and final drive also, and differ only in the gear selector and the clutch operation. The 3 speed motors are identifiable by an extended clutch side cover shown below. 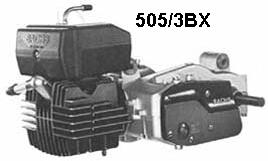 Most came with a 26mm ID exhaust, while some restricted B and A came with a smaller 20mm exhaust. Very restricted 2 speed B's even came with 10 and 16mm exhause headers.

Some differences in timing advances are set at the factory, typically with excessive advance to further limit some of the slower-intended motors.