The problem: the powder coating was too thick to get the controls on. I tried sanding the bars to remove the powder and accidentally sanded too far up. The solution: entirely remove the finish entirely and replace it with something better.

Rust bluing is the traditional way to finish guns and other ferrous machinery. It involves the controlled oxidation of steel to create a durable patina intrinsic to the metal. Specifically, we boil red oxide (rust or Fe2O3) to create black oxide (magnetite or Fe3O4).

After repeated sessions, the metal can't rust any further. Then we cure the finish with oil to displace any remaining water.

A note on other bluing techniques

Tempering the steel between 240–320 °C gives it a finish from yellow to purple to blue. This also changes the metal's tensile properties, making it harder and more brittle, leading to cracks. For this reason, and because I left the powder coating inside the handlebars intact, it's inappropriate here. Powder coating only tolerates temperatures to about 121 °C before the annealing fails.

There are also various "cold bluing" products that contain selenium dioxide. These simply wipe a layer of copper and selenium ions on the steel, giving it a blue appearance. Cold bluing imparts no corrosion protection and it's not intrinsic to the metal. It's most appropriate to touch up a worn finish.

The materials are relatively simple and nontoxic compared to specialty compounds like Brownells Oxynate 84. A simple test for the approximate iron content of steel: how strong does a magnet stick to it?

It's important to use the strongest solutions readily available. 6% vinegar is often sold as "cleaning vinegar and it's 20× stronger than regular (5%) vinegar. Deionized water is also significant if boiling, but unnecessary if steaming. The dissolved solids in tap water may unexpectedly alter the oxide formation.

Although the chemicals involved are less toxic than hydrochloric acid, sodium hydroxide, etc., I performed all work in a well ventilated area with appropriate PPE for basic chemistry work.

Good abrasives help give the steel a good polish before finishing. Specifically, the bluing accentuates scratches and gouges.

A final coat of oil helps the finish cure and displaces any remaining water. I like to submerge metal in mineral oil and bake it at 300 °F for an hour as if seasoning cast iron. I call it the "special treatment" and use it on all fine machinery.

The bars stripped to the bare metal

The best patina forms on clean, bare metal free of surface imperfections. Preparing the metal was the most time consuming step.

First I removed all hardware and sanded off as much powder as possible by hand. I used progressively finer grits, starting at 60 grit and ending at 320 grit.

Then I inserted synthetic wine corks to plug the holes at the bar ends. I also cut strips of cork to plug the areas where allen bolts fasten the bars. It was very important to protect the threads for sand blasting.

I took the bars to a friend's shop where he grinded away the remaining powder (Thanks Steve). The media on hand wasn't coarse enough to blast away the powder, unfortunately.

Finally I polished the metal to the highest shine possible with #0000 steel wool. I left the corks in place throughout the rest of the process. 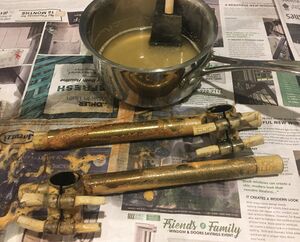 Painting on the solution caused the bars to rust instantly

I etched the bars by splashing them with warm vinegar for about 5 minutes. After that time, I removed the bars without wiping them down.

Then I dissolved a generous amount of table salt in warm H2O2. I only heated the H2O2 enough to dissolve the salt because it breaks down fast. Each batch of H2O2 and salt lasted about 3–4 coats.

I painted the oxidizing mix onto the etched steel and rusted it. Using a blow dryer helped warm the metal and accelerate the rusting.

After a fine layer of rust formed on the metal's surface, I placed the bars into a steam chamber. Submerging them in boiling water is another option but steaming them promotes better adherence. It also produces a finer, more even coat of black oxide. Please see Why should you steam rather than boil?

I replaced the water every 3–4 coats when it became too rusty. After 5 minutes of steaming, I removed the bars and "carded" them.

I used #0000 steel wool soaked in cleaning vinegar to remove as much magnetite as possible. This promoted a durable, even finish that didn't destroy the powder inside the bars.

Less intense carding would give a mottled look. The finish would also be less robust. Most of it could be wiped off with weak acid. 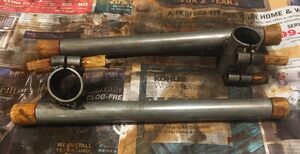 The bars, etched, after 5 coats of magnetite

I did a total of 12 coats. This was the most convenient number to really get a good start on the natural process.

The corks started to fail around the 3rd coat, but most hung on until the end. More corks failed around the 9th coat, hardening and breaking.

By the 5th coat, the steel was noticeably harder to rust.

I let the final coat really rust and dry well

I used all new materials for the last coat. I let the metal rust a bit longer and steamed it twice as long. I removed all corks before the final steam, to promote as much black oxide as possible.

The last carding was with steel wool soaked in oil instead of vinegar. This game a dappled "Tiger King" appearance so I ran it over with vinegar again.

Finally, I wiped everything down with oil and let it cure for 24 hours. The resulting finish is effectively steel aged 40 years in the best conditions. The alloy determines the final color. In this case it was gunmetal grey. 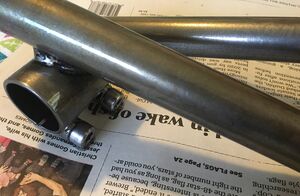 After a couple weeks, I noticed a tiny bit of rust forming under the oil. I removed the hardware and boiled the submerged, hard, for about 20 minutes. Some of the remaining powder got brittle so I removed it with a craft knife. Finally I applied a very generous coat of oil with #0000 steel wool and let it cure.