First, buy a new spark plug (used plugs won't give a good reading), but don't install it yet. Drive around for a few miles to bring the engine to full operating temperature and find a good flat straightaway with low traffic. Install a new plug and run WOT (or whatever throttle position You're trying to tune in) for half a mile or so. Note: Some sources recommend running 1-5 miles or more to get a good reading. While still at WOT, hit the kill switch and slow to a stop. Do not allow the engine to idle before turning it off. The reason for this is that you want the plug to show the conditions of your engine at its hottest temperature and greatest amount of fuel/air mixture. Remove the spark plug and put the old one back in and ride home. Now you can carefully examine your plug. 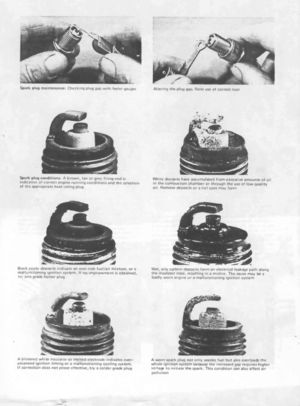 Look at the spark plug under a good light; Some nice milk chocolate brown darkening should be starting around the tip of the insulator. Death white or gray is too lean (too much air, not enough fuel), black and sooty is too rich (too much fuel, not enough air).

Pay special attention to the area deep in the plug around the base of the ceramic center insulator (it helps to cut the plugs threads off with a hacksaw or use a plug scope, especially if it is a hot plug with a long insulator); A thin ring of black soot should develop around the bottom of the insulator. If it is too tall it is too rich, specially if it's approaching or covering the tip, if there is no soot ring it is too lean.

Keep in mind that the "heat" of the plug will affect the readings. A 'hotter' plug has a longer insulator so the heat has a harder time leaving the tip, and will be better at self-cleaning, so the band of soot at the bottom of the insulator will be a bit thinner in the same air/fuel mixture compared to a 'colder' plug, which has a shorter insulator that sheds heat from the tip easier. This is why it's important to determine the correct heat plug first. It needs to be hot enough to keep itself from fouling, but not so 'hot' that it causes pre-ignition. You can read the plating on the ground electrode to help determine the correct heat range; it should be burned off/discolored about half way. The line should be fairly easy to spot, if is too close to the tip then the plug is too "cold", if the plating is burned off too close to the threaded base it means the plug is too "hot".

When adjusting the fuel/air mixture of your engine, you always want to start out rich and work your way down. Running a little rich won't hurt as long as it rev's out well and isn't fouling plugs but you should avoid running lean as it leads to poor lubrication and high temperatures, which can lead to engine seizure, piston holes, and loads of other bad stuff.

Another excellent, color photographed guide to reading plugs by NGK