Oil injectors are used in two stroke engines to provide lubrication usually supplied by mixing two stroke oil with gasoline. The system usually consists of a oil pump and an oil reservoir. Typically the pump forces a metered amount of oil into the intake and the oil is then carried along by the fuel:air mixture into the crankcase. The systems may vary in their complexity. 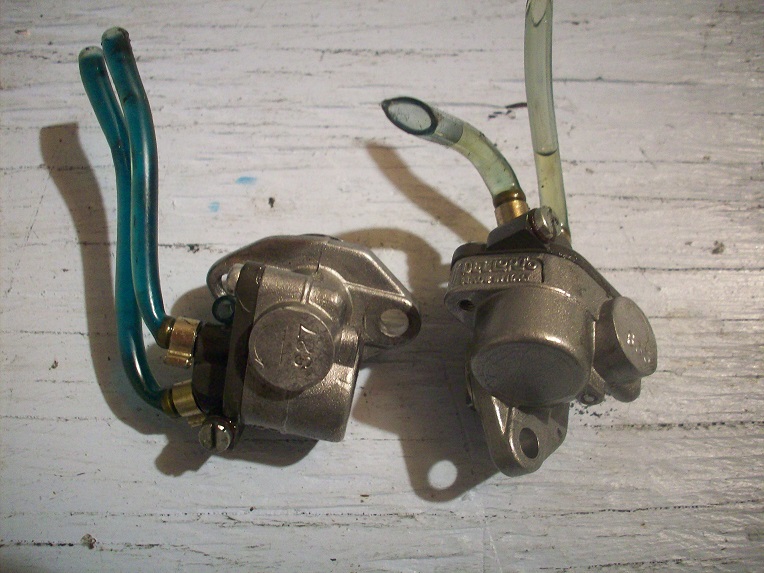 The advantage of this system is that it allows the operator to fuel the vehicle at a regular fuel pump without mixing oil in their tank or gas can. The other advantage is that there is only clean gas running through the carburetor and no oil residue gets left behind by evaporating fuel. This results in a more trouble free fuel system. However, there is little or no warning if this system fails, and failure results in engine seizure.

Furthermore with any tuning increases the oil delivery may not scale appropriately. For example a highly tuned engine with an oversize carburetor may draw 3x the fuel as the stock version but only supply enough oil for the original motor. Many are coupled to the crankshaft so oil delivery scales with RPM and can partly compensate, others may be coupled also to the throttle position to avoid over oiling at high speeds and a closed throttle. Typically it is best practice to premix gas on tuned engines rather than rely on oil injection systems.

Some common issues exist across all brands.

These can be checked by running the bike (with premixed gas preferably) while the hose is detached from the intake and the intake bung plugged and observe for a slow steady drip of oil. It's not much.

Many oil injection system can give years upon years of reliable service provided that they have been kept full with clean high quality two stroke oil and the engine remains stock. All lines and connections should be inspected regularly for kinks or breaks. When purchasing a used moped, the oil injection system should be inspected thoroughly. If the bike is older, has high mileage, shows signs of abuse or neglect, one should consider replacing the entire system or disconnect it entirely and mix the appropriate amount of oil into their fuel.

Again, injectors can be checked by running the bike (with premixed gas preferably) while the hose is detached from the intake and the intake bung plugged and observe for a slow steady drip of oil. It's only a little dribble.

Removing the oil injection for premix is often as simple as plugging the hoses. The most important thing is that the inlet for the oil into the fuel system, which will go into either the engine intake or carburetor, is plugged. If this is left open it creates a serious airleak and lean running condition. Beyond that the pump and reservoir themselves may be removed, but it's not necessary except remember if it's still on and full, but detached, it may still pump all that oil out anyway, all over whatever's there...

Example below is a Tomos intake, circled is the inlet hole. In this case it can be plugged with a short m6x1 bolt. 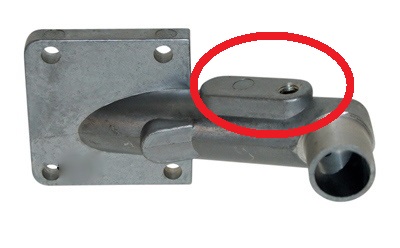