This is a list of aftermarket variator options for Motobecane mopeds. 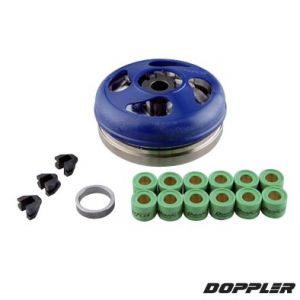 The ER1 is the lowest priced aftermarket variator offered by Doppler, and is only available for the Peugeot, which was never imported to the States. Like the Doppler ER2, it uses interchangeable rollers to actuate its mobile cheek. While its low price may seem attractive, it offers little performance increase over a stock variator with a two-ball setup. The general consensus on forums is to look elsewhere. It is not available with an idle clutch function. 58 euros. 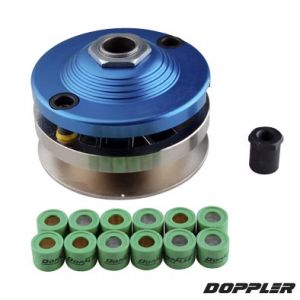 The ER2 is a more popular choice and is a good, cost effective replacement for a stock variator, also using interchangeable rollers to actuate its mobile cheek. The ER2 is lighter than the stock variator and changing the rollers does not necessitate removal of the variator itself. The ER2 is available with or without a clutch function. 115 euros. 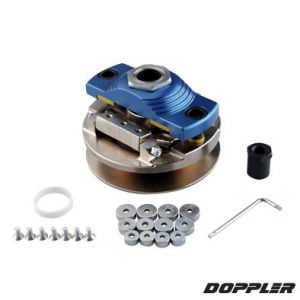 The ER3 is Doppler’s top of the line offering, and utilizes weights attached to two rocker arms to actuate its mobile cheek. This is advantageous for a couple of reasons. The rollers weights on variators that utilize them tend to wear, slowly reducing their weight, which eventually effects the adjustment of the variator. This is of no concern with a variator utilizing the rocker arm system, as the weights will never wear. Adjustments are also accomplished much easier on a variator with the rocker arm system (specifically the ER3) as the weights are external and adjustment requires no dismantling of the variator itself whatsoever. The ER3 is available with or without a clutch function. 146 euro.

It has been noted that Doppler variators, specifically the ER2 and ER3 have a tendency to wear faster than others. The fact that each individual part is available for replacement from the dealers is both evidence that this is true and a solution to the problem. The cheeks that the belt rides on become grooved in the lowest and uppermost positions over time due to belt slippage in those areas. I’ve read an account of an ER2 worn so badly that it felt like a two speed rather than the progressive change in speed normally associated with variators. If running a Doppler variator, use of the proper belt is essential to the life of the variator. The Doppler belt, or Bidalot 782 is recommended. If the variator collides with the driven pulley (as is a known problem with the ER3) use of a longer belt (such as the aforementioned Bidalot 782) should take care of it. USE OF A STOCK BELT WILL RESULT IN PREMATURE WEAR!! 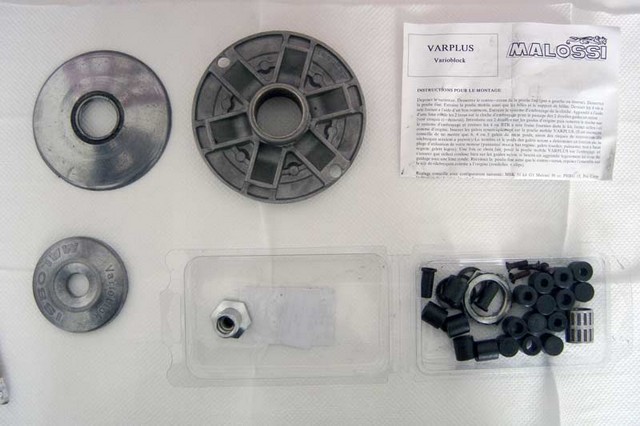 The VarPlus is simply a replacement for the mobile cheek on a stock variator, allowing the use of 6 interchangeable weights versus the stock three or four ball setup. Since this merely replaces the mobile cheek, it leaves stock clutch functions uninterrupted and merely offers more flexible tuning options on the stock piece. 49 euros.
I weighed out the three weight sizes and made up a little chart of possible weight combinations and their associated total mass in grams. my weights were a little dirty/greasy so these should be assumed to be approximate masses but the relative masses should be fairly accurate. 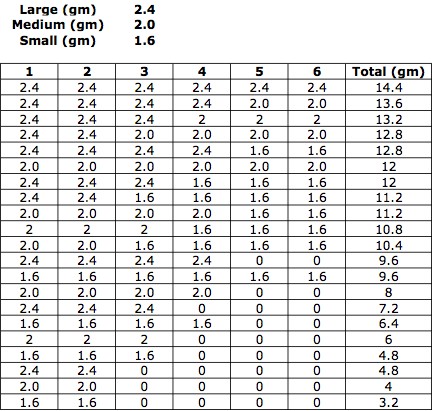 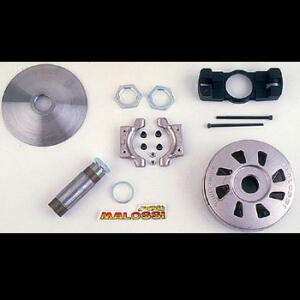 The Variotop utilizes a weighted rocker arm setup similar to the Doppler ER3’s to actuate its mobile cheek. However the Variotop is heavier than the ER3 and adjustment requires that part of the variator be dismantled for access to the weights. The Variotop’s pulley however, when the variator is fully closed, is larger in diameter than that of the ER3’s by about 15mm or so. This will lead to the same problem that users of the ER3 encounter, wherein the variator will collide with the driven pulley. A longer belt must be used, and an aftermarket lower tension spring would probably also be necessary to take full advantage of the additional pulley size. I’ve not read about any instances of premature wear with the Variotop. It seems pretty robust. The Variotop is available with or without a clutch function. 176 euros. 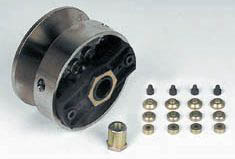 The Bidalot variator utilizes a weighted rocker arm setup similar to that found on the Doppler ER3 and Malossi Variotop to actuate it’s mobile cheek. However, unlike the Variotop (and like the ER3) the Bidalot’s weights are external so that no dismantling of the variator is necessary for adjustment. The Bidalot is lighter than the Variotop, but heavier than the ER3 and suffers no premature wear problems that I’ve read about. French mopeds forums usually list this as the best variator available. The Bidalot variator is unavailable with a clutch, necessitating the use of a clutch pulley. 160 euros. 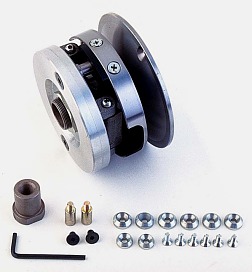 The Giraudo, like the ER3, Bidalot and Variotop, utilizes a weighted rocker arm setup to actuate its mobile cheek. Unlike the Bidalot and ER3 however, the weights are not easily accessible and the variator must be dismantled to access them to make adjustments. The Giraudo variator’s pulley cheeks (both the mobile and fixed) are made of steel, which eliminates the premature grooving caused by belt slippage on the ER2 and ER3 but unfortunately makes the Giraudo a little on the heavy side (though not as heavy as the Variotop). The Giraudo seems to be a little more difficult to find than the others mentioned in this article, but is (according to mobcustom.com) available with or without a clutch function. 130 euros.