There are a few moped types that Moto Guzzi made, including the Trotter, Robin and the Chiu. Some models had a few variations; the Trotter, for example, had a version called the Super with telescopic forks, a Special M (one speed) and a Special V (variable speed), as well as a few other versions. The Robin and Chiu are basically the same bike and make use of a Benelli engine whereas the Trotter used a couple different engines of Moto Guzzi's design. 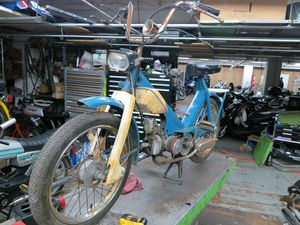 Some, but not all, parts are interchangeable between the Robin and Chiu. For example, the exhaust on a Chiu was a traditional pipe and baffle design. The Robin used a smaller pan style exhaust.