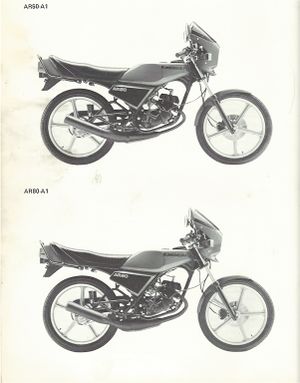 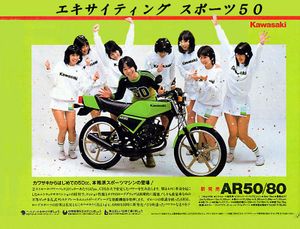 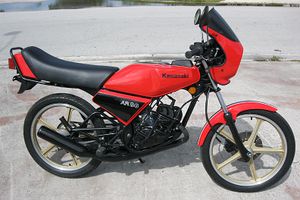 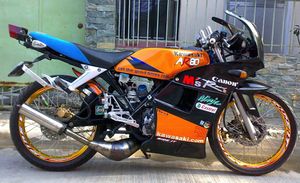 "Introducing the Kawasaki AR50. The answer to the MB5."

First released in 1982, this reed valve, air-cooled two stroke was devised by Kawasaki for the flourishing moped market in Europe during the 1970’s, 80’s and early 90’s. Both AR50 and AR80 are considered rare in in the US because like Honda's MB5, it was only imported in the states in 1982.

Designed like it’s more distinguished larger siblings, the small motorcycle was a huge success, and was a formidable competitor among anything else on the market, and more often than not, better than most. The wildly fun to ride AR50 featured 49cc displacement, a five speed gear box, Mikuni VM14SC carburetor, Kawasaki Superlube oil injection, Kawasaki Uni-trak rear suspension, hydraulic front suspension, a beautiful headlight fairing and dash with 12k tachometer, stock restricted CDI and Enkei 5 star mag wheels.

Un-restricted, it was faster than any of the competition, and was partly responsible for the demise of its own market due to legislation catching on to the fact that these ‘mopeds’ were able to top 60+ mph in some instances.

The family of AR50s ended in 1997, when the market for these machines became unfavorable due to new licensing restrictions and regulations.

The 12+hp stock AR80 weighed in just a little more than the AR50, yet produced 40%+ more power. A manic little machine with little to no market with licensing laws favorable to the 80cc size.

It has been said that the AR80 was capable of performing as well as or outperforming most 125cc machines of that time period, and was widely known for being a 'bait' bike with its abilities to keep up with larger bikes of that period.

The line of AR80s ended in 2003 with the AR80K model, which featured a full body fairing and liquid-cooled engine and was mostly sold in the South Pacific region of the globe.

Many performance parts were and are still available for both AR50 and AR80, including larger bore top end kits by Autisa and others, expansion exhausts by Gianelli, Homoet, Mircon and others, and even water-cooling.

Just like most of Kawasaki’s two stroke production, quality was high and the value for these hard-to-find small motorcycles is only going upwards, making restoration a lucrative reality.

Today, parts for both models in the USA are scarce to non-existent. It is a niche community of owners and occasionally these magnificent pieces of two stroke history pop up in local Craigslist ads and eBay.

KAWASAKI MANUAL SPECS (1982 US models only)