The Suzuki K10 forks have recently become quite popular as replacements for stock forks on a wide variety of mopeds. They’re well constructed, relatively inexpensive, and available.

I decided to rebuild mine after I noticed they were leaking oil. Below is a list of the steps involved in rebuilding these forks.

First things first, remove your front wheel and axle from the forks. I didn’t even disconnect my brake cable because I was feeling lazy.

Next, you’ll want to remove the fork tubes from the two triple-trees. The tubes are held in the top triple-tree by two large bolts, one on the top of each tube. Simply unscrew and remove the bolts. Underneath each bolt, there are a flat washer and a lock washer hidden under the head of the bolt. They’re easy to lose, so keep an eye on them as you take the bolts out.

The tubes are also clamped in the bottom triple-tree. Loosen the bolts, and the tubes will be free to slide out the bottom with a little bit of wiggling. Now these tubes may have probably been clamped in there for quite a long while, so you may need to gently pry the bottom triple-tree open a little bit, or work the fork tube back and forth to get it to slip out. Keep in mind that with all these bolts loosened, and the fork tubes removed, the shrouds covering the tubes can be removed as well.

UNLESS YOU DRAINED THEM SOMEHOW BEFOREHAND, YOUR FORKS WILL BE FULL OF OLD OIL. Remove the top rubber washer from the very top of the fork tube. Then remove the plastic cap, spring, and metal washer beneath the spring, if you can. If you don’t take these out, they’ll fall into the puddle of oil you’re about to create. Once you’ve got a tube out, I recommend turning it upside down over a drip pan or bowl or whatever you’ve got so that you don’t make a mess on your floor.

Now one of my oil seals simply popped out when I removed the spring and the washer. The other one did not. To remove them, you must disassemble the lower part of each fork tube. The silver thing (which I will henceforth call as the “fork boss”) in the middle of the tube threads off the black fork lower. I found the easiest way to remove that silver boss is the place the whole fork tube upside down in the vise. You might want to put something under your vice, because the tube is probably still going to drip a little bit. Wrap the silver boss in some rubber, and clamp the vise on that part. I used rubber sheeting I had lying around, but you could wrap it tightly in old inner-tube as well. Next, use the axle, or a hefty screwdriver through the axle dropout to screw the fork lower out of the boss.

Inside the silver boss, there are three components. There is the old oil seal, which is really funky, there is a metal sleeve with a flange, and there is a rubber O-ring. The flange on the sleeve is “above” the O-ring, so you’ll have to push it past the O-ring to get it out. It’s a tight fit, but you’re just pushing it past the rubber, so don’t worry too much about damaging it. Also, I removed the oil seals before the O-rings, so… do that.

The oil seals that come out of those forks are like none I’ve ever seen. However, the Wizard himself, Mr. Naz, informed me that conventional oil seals would be adequate for replacement. The old seals measure 37mm outside diameter, 27mm inside diameter, and 10mm high. The only seals I found commercially available are 7mm high. Theoretically you should take up that 3mm with a shim, but I didn’t, and it’s not an issue. I went to my local oil-seal supplier and just asked for a pair of oil seals measuring 37x27x7, and they special ordered them for me. It took about a week, but they were only about $5 each. If you don't have a bearing or seal supplier where you live, you might try ordering them online. I found some seals that should work here and here after a little searching.

The 2 O-rings you need measure 37mm O.D. 32mm I.D. and are 2.5mm thick. I bought them at the hardware store where I work. They were under a dollar each.

Once you’ve removed the flanged sleeve, pick the old O-ring out of the groove in the fork boss. Then work the new O-ring into the groove.

Next, install the oil seals into the fork boss. Install them so that the lips face IN to the fork boss. Line them up, find a socket that’s about the right size, and tap them into place. They rest against a metal protrusion in the fork boss, so you should be able to feel when they’re seated.

This is a good time to clean the fork parts. I hosed out the inside of the fork lowers with brake parts cleaner, and then did the same to the fork uppers. This is to get all the old oil out, and any grunginess that might be in those tiny little holes in the fork upper. Let them dry thoroughly.

Once you’ve got your minty-new O-rings and seals in the fork bosses, it will be time to re-assemble the fork tubes. Slather a little oil on both the O-ring and oil seal, and then shove them back on to the fork upper. Just the right kind of tight. Then place the upper in the lower, and tighten the fork boss back down on the lower. Lastly, remember the order of those parts? Put the metal washer on first, then the spring, then the plastic cap, and lastly the little rubber washer in the very top. I love how those say “Made in Japan” on them.

Slide the fork tubes back through the triple-trees, and then put the axle through the dropouts, and put the nut on loosely, just to keep them together.

Grab a friend, and have them push down on the front of the bike so that the springs compress ALL THE WAY. This is to get the top of the fork upper high enough so that you can thread the top bolts in. Get those threaded in and snugged up, remembering the flat washer and lock washer under each bolt. Then tighten the bolts on the bottom triple-tree.

Put your wheel back on, and then loosen and re-tighten the bolts on the bottom triple-tree. Alex said so. Something about not wanting there to be any twisting stress. It can’t hurt.

Now remove the top bolts again. I know, you just put them in, but you need to take them out to fill your forks with oil! This is the magic ingredient in hydraulic suspension. The manual recommends adding 125cc of SAE 10W30 or ATF. I used 10W40, because I like mine a little stiffer.

A piece of moped fuel line fit perfectly in the hole where the top bolt came out, so I taped it to a funnel, and poured the oil in. Then I waited. The oil is thick, and it takes a long time for it all to drain down into the fork. I figured out a way to wedge my funnel in the cables, and then went outside so Alex could smoke a cigarette. It takes about 1 cigarette for all the oil to drain into one fork tube.

After all the oil is in there, put the top bolts back in for the last time. 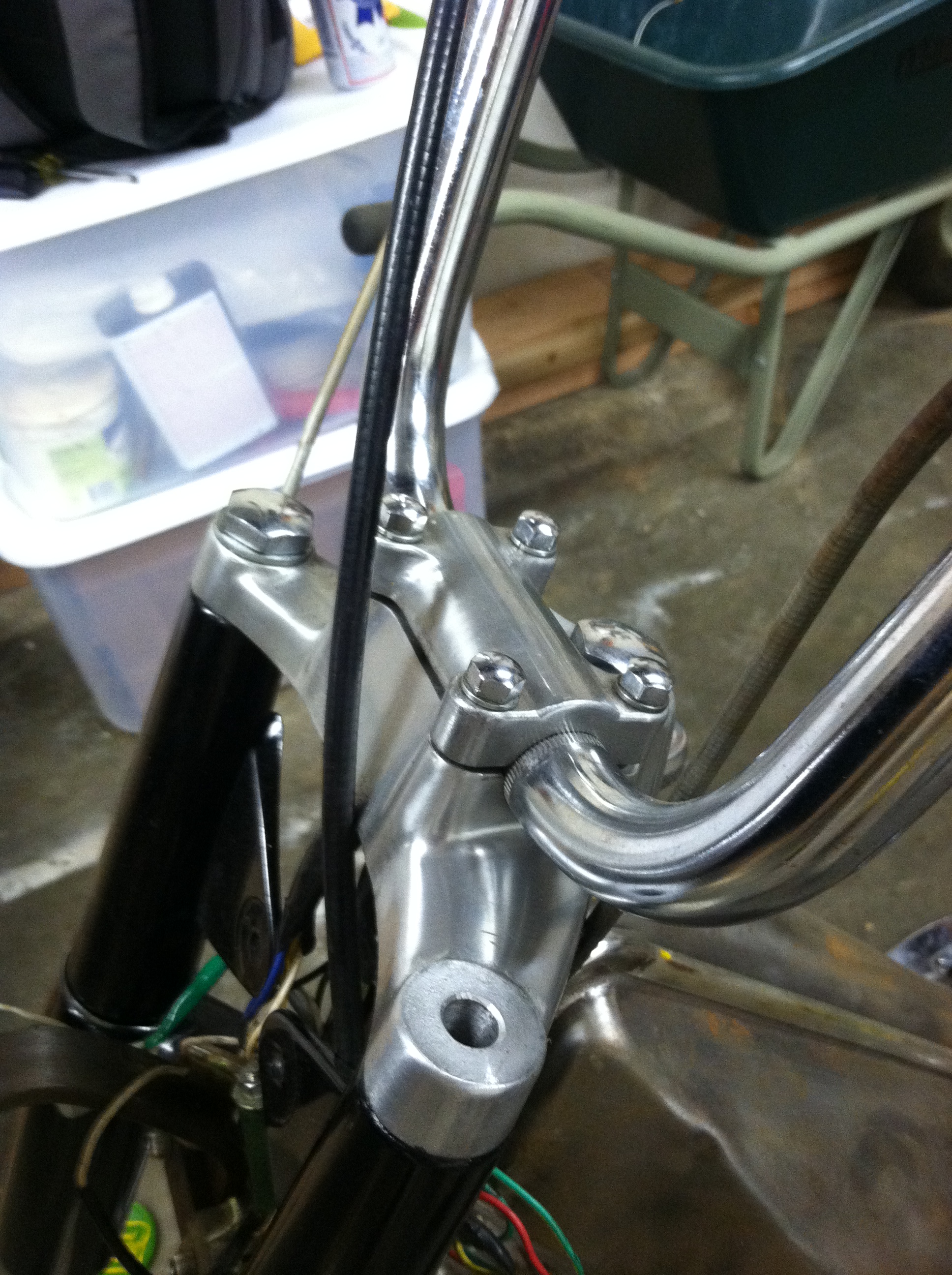