The engine is an air-cooled, four-stroke, single OHV, with a 49cc displacement. "The PC50 engine featured an overhead camshaft motor derived from the Honda P50 motorwheel which ran from December 1966 to April 1968, being replaced by the PC50 (OHC), which continued up to April 1970 when the OHC engine gave way to the OHV (pushrod) motor in the same cycle frame, and the new model being re-designated as the Honda PC50K1." The pushrod motor was cloned and used in the 70's Indian branded mopeds. 1 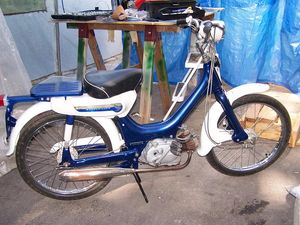