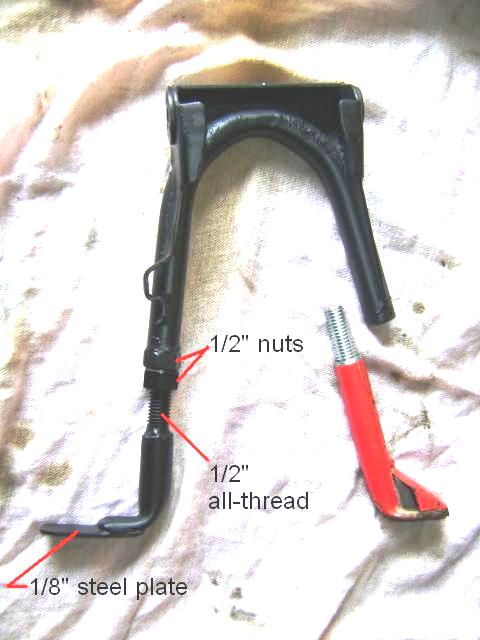 I like the way motorcycles are parked – leaning to the left.

So, I wanted to mod a center stand so that it would lean to the left. I did so, but getting the “right” lean wasn’t so easy (since the leg was cut, heated, flattened, then bent to the right shape), AND I missed having the ability to put it on the center stand for maintenance/repair.

So, I decided to mod the center stand as shown in the pic. This design solves both problems:

1) More or less lean can be achieved but adjusting the left a turn or so, then locking it in place; and

2) The right leg can be just slid in place, and the left adjusted longer to put it on the center stand for repair/etc.

I just bought some 1/2” all thread, welded (actually brazed) a 1/2” nut to the center stand left leg, then brazed a length of all-thread to the left leg that had been cut off.

Anyway, I’m not claiming that this is an original idea, or even the best answer – but none-the-less, I just wanted to share the results.

Someone later asked me this question: Why didnt you just get a side stand and bolt it/weld it the swing arm?

Since I still want to experiment / graft other exhausts on my Hobbit, this modification: makes the right side of the bike is clear of obstacles; keeps my ability to do easy maintenance on the center stand; and let's me lean the bike to the left.