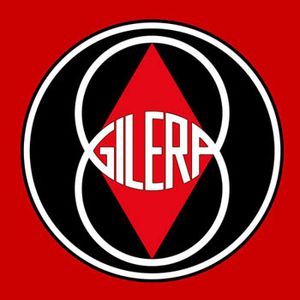 Gilera is an Italian motorcycle manufacturer founded in Arcore in 1909 by Giuseppe Gilera. In 1969, the company was purchased by Piaggio.

In 1935, Gilera acquired rights to the Rondine four-cylinder engine. This formed the basis for Gilera' s racing machines for nearly forty years. From the mid-thirties, Gilera developed a range of four-stroke engine machines. The engines ranged from 100 to 500 cc, the most famous being the 1939 Saturno. Designed by Giuseppe Salmaggi, the Saturno was inspired by the pre-war Gilera VTEGS 500cc “Otto Bulloni” yet was quite different due to its unit construction.[1]

In 1969, Gilera became part of the Piaggio group.

In 1992, Gilera made a return to the Grand Prix arena and Piaggio continues to produce small-displacement motorcycles with the Gilera name. The famous factory of Arcore was closed in 1993 and now the motorcycles (only scooters) bearing the name Gilera are produced by Piaggio in Pontedera.