Bing carburetors are notorious for leaking gas. If you're the kind of person who likes to keep their fuel where it belongs (as in, not on the ground), read on for some suggestions to help fix your leaky Bing. Start with Part 1 and go through the list. Ask yourself the question in bold. If the answer is "yes," check the next step listed under "affirmative." If the answer is no, proceed with the instructions under "negative."

Take your carb apart. If you don't know how to do this, please watch these videos. Examine your float needle. Is it clean?
Is the rubber tip in good condition?

Replace your float needle and try again. See the shop links for places to buy a new float needle.

Now, look at your carb. You see that hole where your float needle goes? Is it clean? Are there no scrapes or scores on the inside of the hole?

Clean it thoroughly and re-try. If it's scraped or scored, you might have to buy a new carb body. You can buy a new float needle seat, from Bing USA. You can take one off another carb. Heat gun and a small drift. Get the seat cold, use some heat and pack seat with cotton. Use a small drill bit and a rubber hammer, if needed. Very light love taps.

Note: Sometimes you can take a very fine piece of wire -- say, a piece of wire plucked from a wire brush -- and GENTLY scrape it around in that hole to make sure you've gotten rid of any sediment or other lurking crusty bits.

"Note2: Sometimes you can chuck a q-tip in a cordless drill and with a little polishing compound you can clean up a damaged seat... then clean any residual abrasive.

Clean it anyway. Now try again. If that still doesn't work, go on to Part 3.

Take off your float and take it for a little swim -- specifically, a swim in some gas (or premix). Does the float actually float when placed in a container of gas/premix? 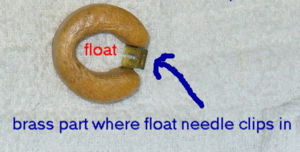 Your carb is all clean, but it's still leaking. Now what? Now try adjusting your float.

Does your carburetor still leak?


Note: Unless you fall into one or more of the following three categories, it may be best to replace your float needle before experimenting with this step (part 4):

Success! Give yourself a pat on the back and go reward yourself with your beverage of choice. Well, first you might want to start and run the moped to make sure you didn't bend the brass clippy thing too far, because if you did that, you won't be getting enough fuel, but a reward for yourself is still in order.

You have a few choices now.

Why this (theoretically) works

Here's some basic carb theory to help explain why these steps work. However, like people, each carb is special and slightly different from other carburetors. These steps should (theoretically) work for all Bing carbs, but just because something works in theory doesn't mean it works in reality.

Fuel flows from the petcock through the fuel line through the fuel filter (you do have a fuel filter, right?) into the banjo and then into your carb. The float needle plugs up the hole right under the banjo when your float bowl is full of fuel. If the needle is not in good condition, it can't seal that hole, and your carb will overfill and leak.

This is basically an extension of Part 1. If there is some little bit of crud stuck in that hole or the hole is scored, the needle can't make a good seal with the hole, and your carb will overfill and leak.

Do parts of these instructions not apply to the square Bings? If so, add instruction modification here!

To access the rubber tipped float needle on a Square Bing: The float has a small metal plate embedded in it. The plate has a slot where the float needle clips in place, and then wraps around a pin that serves as a hinge. First remove the pin by pushing it out sideways, you should now be able to pull the float and pin out. Do not leave the pin in place and try to force the float needle to unclip from the plate, the head is fragile and can snap off EASILY.