It all actually started as a subframe modification since I was having a lot of trouble tuning my 21mm Dellorto.
Fed up with constantly undoing the rear shock bolts and jacking up the rear of the frame, then unbolting
the intake and fishing it out with the carb attached, I decided to cut off the top of my subframe air box so that
the carb could be loosened then slid back off the intake unubstructed by the useless airbox structure. 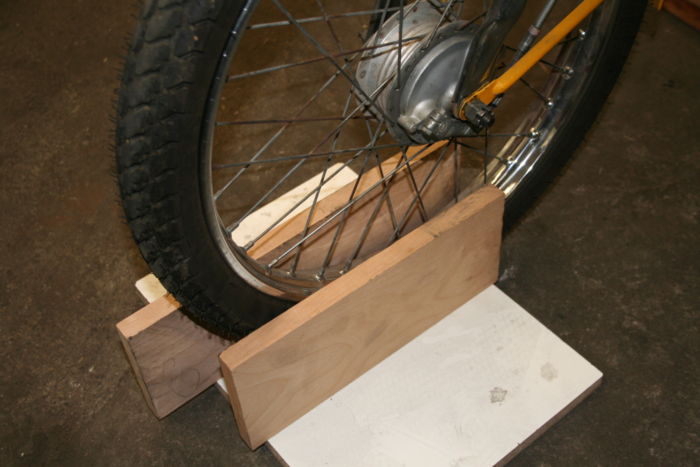 I started the process the same way I’ve done many times by placing a 2×4 under the kickstand then blocking the front wheel front of the bike doesn’t try to roll away and topple over when I jack up the rear section. 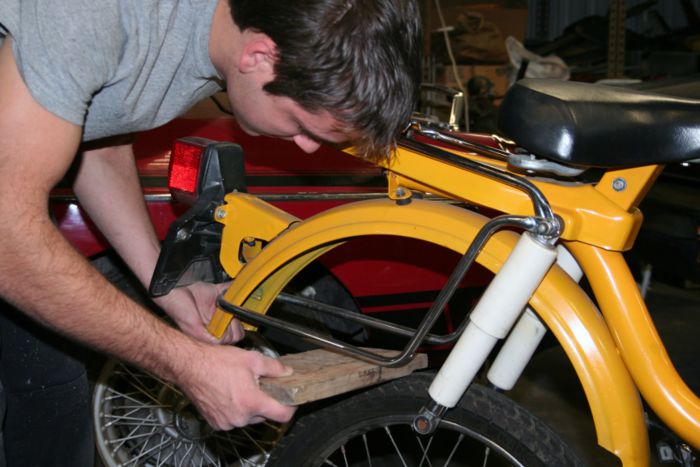 Remove the lower rear shock bolts, and raise up on the rear of the frame till you can slide a wood slat in between the top of the rear tire and the fender support brace. I also like to remove the fuel line so it doesn’t get pinched
between the head fins and the bottom edge of the tank. 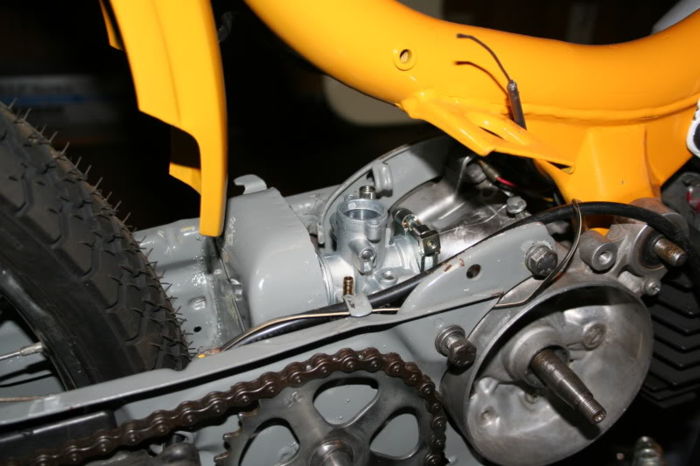 Now with the bike in this position I can easily unhook the wires, rear brake cable, then unbolt and remove the intake and carb. (This is actually a stock photo from a year ago when I first restored the bike). With all the links to the front
of the bike unhooked I can then remove the main frame to motormount bolt and seperate the two halves. 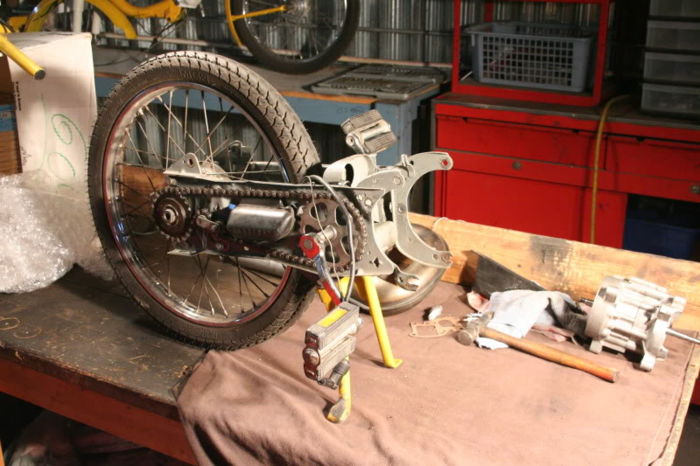 Next I roll the front half over to a corner and lift the rear section onto the bench and remove the engine and exhaust.
I thought about removing the rear wheel but It didn't seem to be in the way and it's mass seemed to stabilize the sub and kickstand. 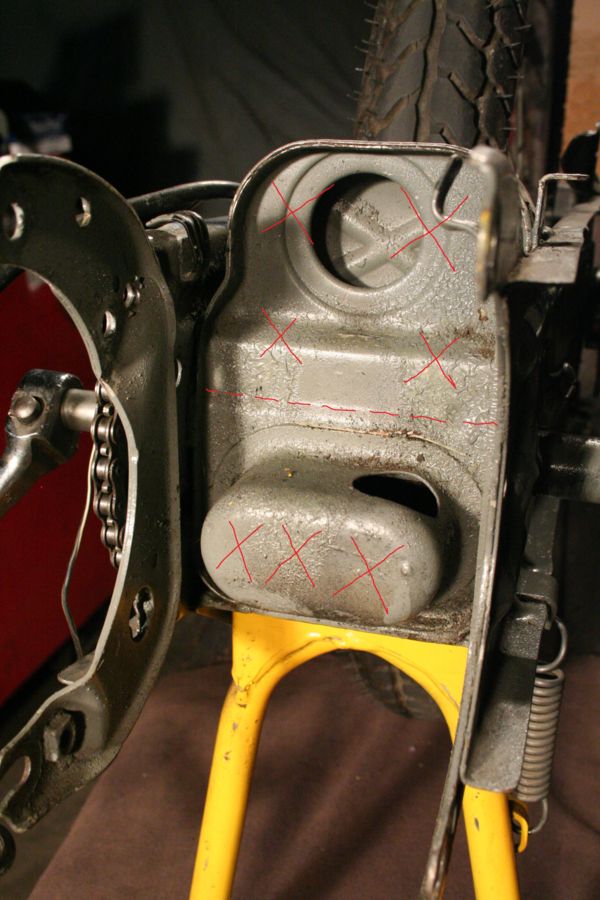 I made a mental picture of the amount of the amount of steel I could cut away and not compromise the substructures ridgidity (highlighted in red) I figured I could cut away all the steel above the pedal shaft tube and that would
make enough room to slide the carb backwards off of the intake. If after I cut out all the steel, the sub seems flimsey I can maybe make some sort of brace to weld back in. Pedal action flexes the sub more than you would think and
I don't want to have to weld up a bunch of stress cracks later. 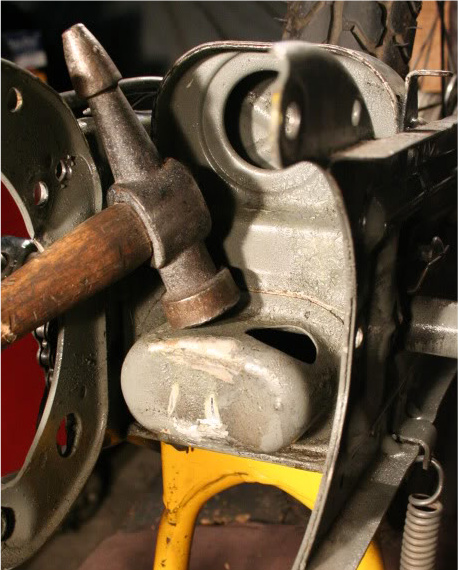 Getting the metal cutting part started was a little tougher than I thought. First I tried to pound off the bottom of the air box with a body hammer but this is pretty
tough steel and I didn't want to start warping the sub with huge dead blows. 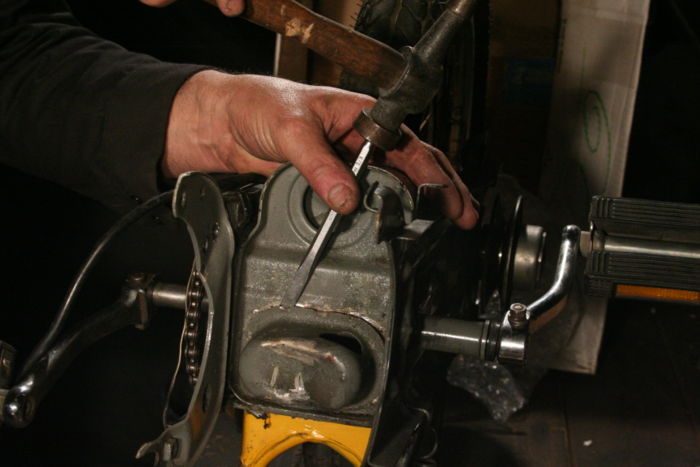 So I switched to a small chisel and began to peck away at the spot welds. 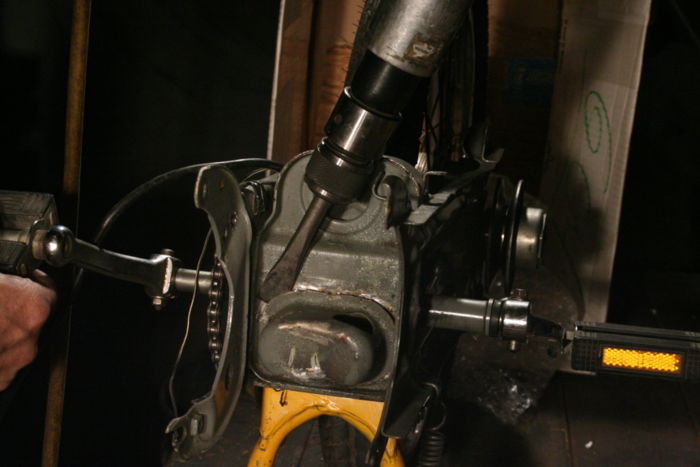 This method proved time consuming and painfull so I quickly switch to my air chisel and blasted on that sucker. 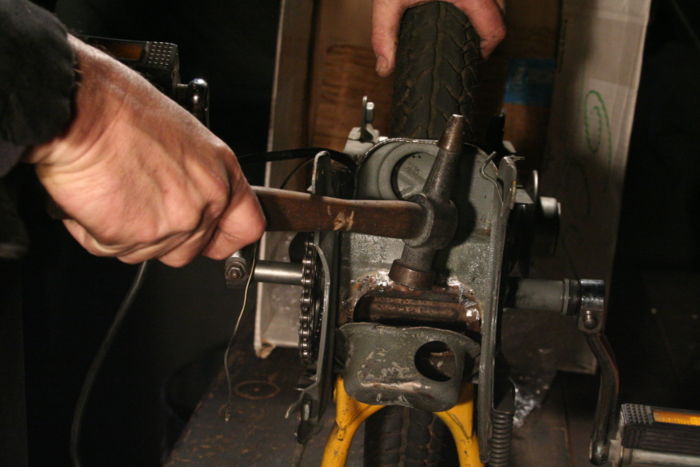 In no time I could tap the round part off with a hammer revealing a cool little cave that was chocked full of sand dunes and all kind of road rash. 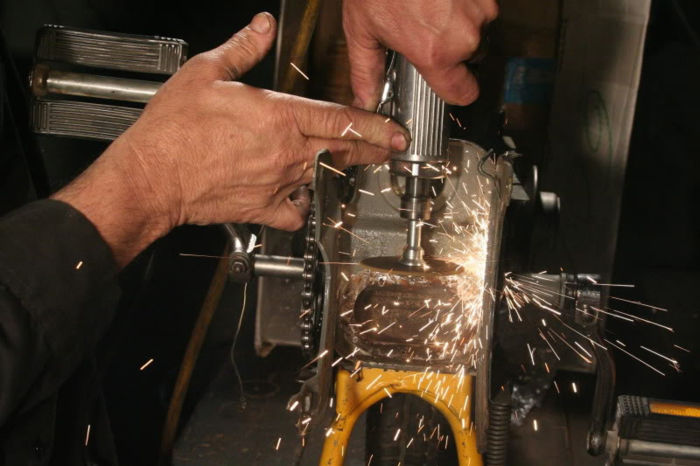 Next is th absolute hardest part, cutting through the front and rear walls of the air box just
above the pedal shaft tube. I used a air die grinder with a cutoff wheel attached. I have years of experience with this tool so I know how it behaves in certain conditions.
Im trying to say this tool can hurt you badly, goggles and gloves a must for Noobs. 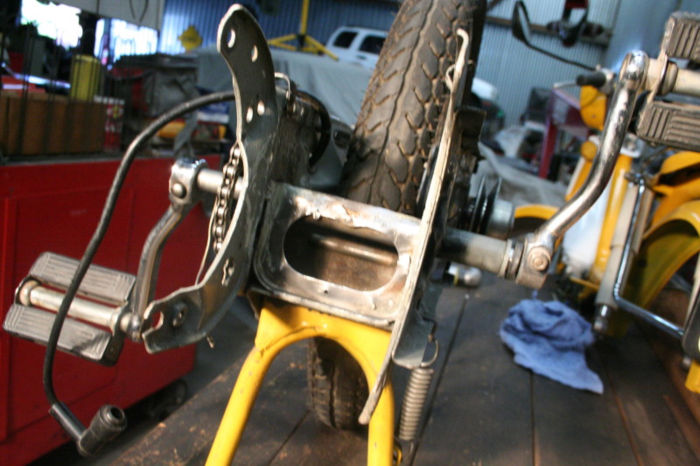 I had to be carefull not to cut through the side panels of the sub yet cut deep enough so as to weaken the top half. Then I was able to wrestle the top half back and forth with a large set of channel-lock pliers till the chunk of steel
snapped out leaving a nice big open area. 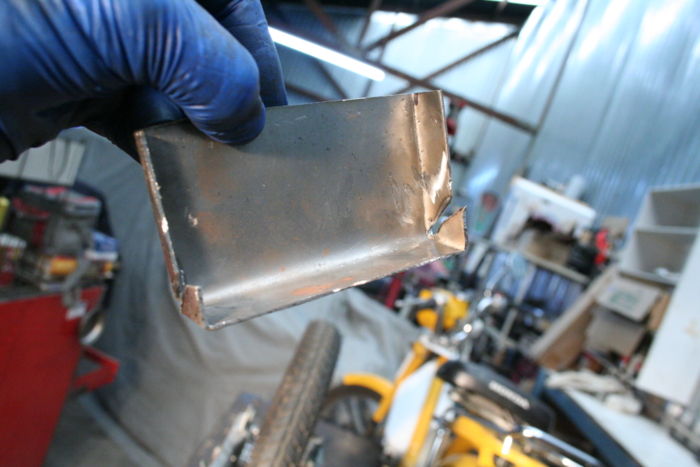 I started to worry a little about all the metal I was removing and what, if any, weakening of the structure I was causing. So i clamped a rectangle piece of 10 gauge steel in a vice
and created this crude little bolster brace I could weld back in for strength. 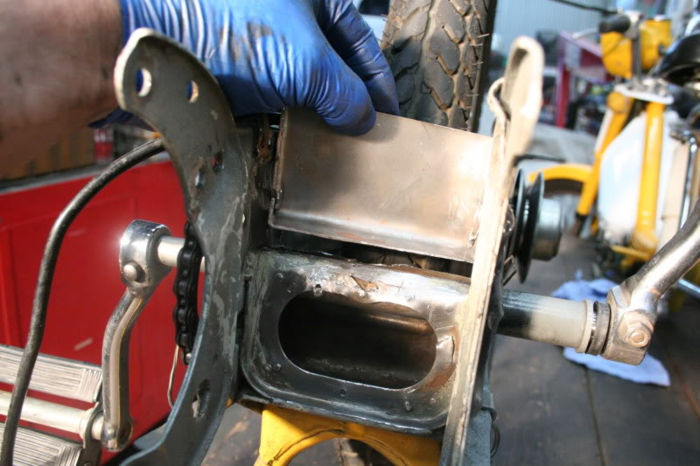 I actually got pretty lucky when I made this brace, it came together in one shot. Some days I have 2 or 3 tries balled up at my feet. 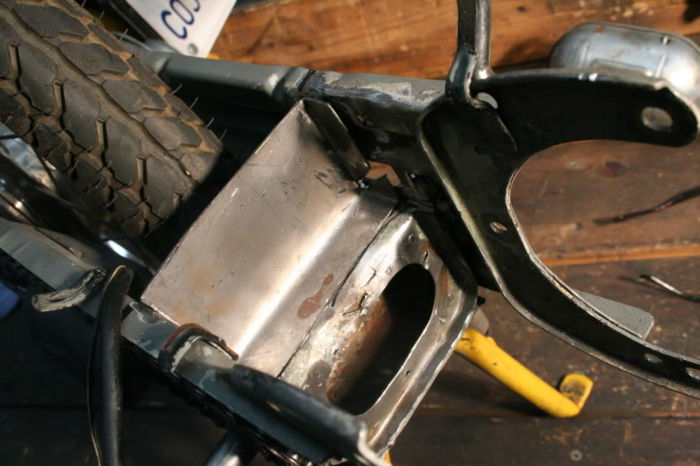 A few taps, and hey it fits nice. 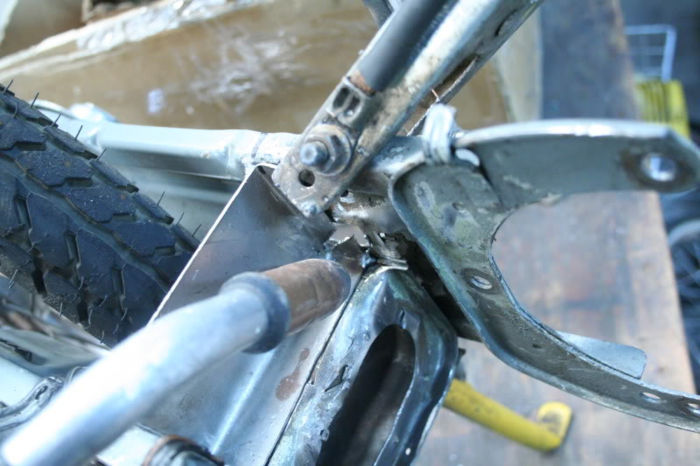 Now onto the welding table. It's always a good call to grind off as much old paint from the area to be welded as you can get at. The air cut off wheel or a dremel is good for this. Another good point is, when welding a structure that
flexes and stresses, it's best to do evenly spaced "spot" welds instead of a continuous bead because the metal right next to a weld is harder and more brittle than the metal thats 1/8 of an inch away. When a crack forms next
to a weld it will travel the length of that long bead, where as with spot welds the crack will usually stop there. 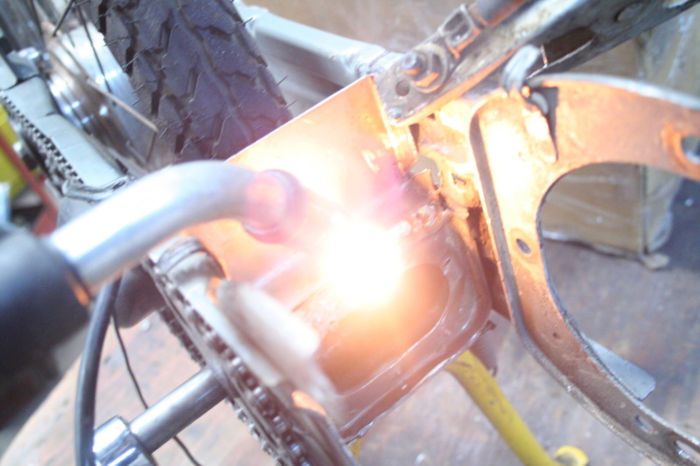 Yeah! "lava spots" A few well placed spot welds and now my bolster brace is rock solid. One detail still bothers me
though. It’s that round empty cavern open in the bottom of the air box. If I leave it open It will fill back up with road rash and sand right near my carb. 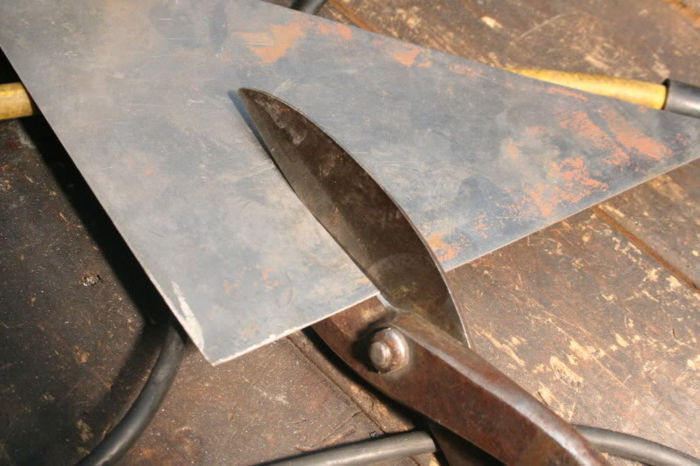 I've decided once and for all to cover the cave in the lower air box. The best fastest way to do this is simply cut a cave size cover out of some scrap 18 gauge steel, then tack weld it over the hole. 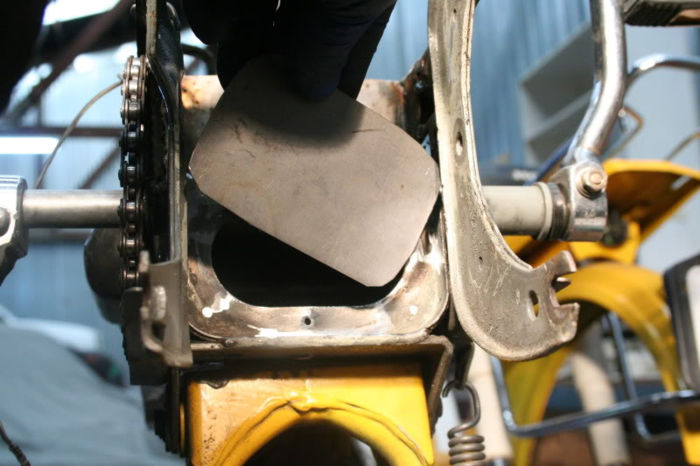 Ok then It fits perfect. It seems a
shame to waste the "secret space" of this little cave so I've decided to turn it into a "time capsule I just need to find somthing cool to put in the cave. 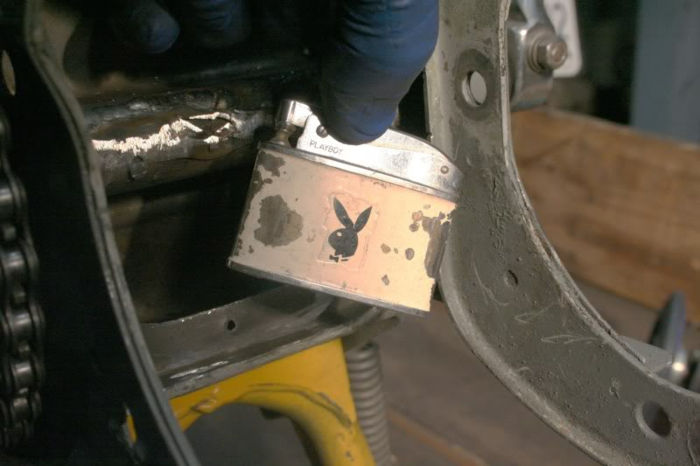 Thinking quickly, I snatched my bosses lighter from his desk (his wife quit smoking last year and constantly nags him to do the same. He has like 3 more of these Playboy lighters, mint in the box. This is just his every day, but it "will"
be missed. 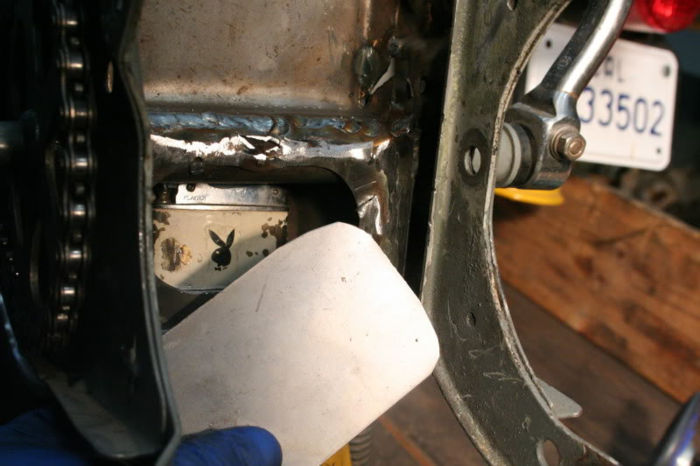 Another perfect fit and none too soon cause the boss is back from lunch. 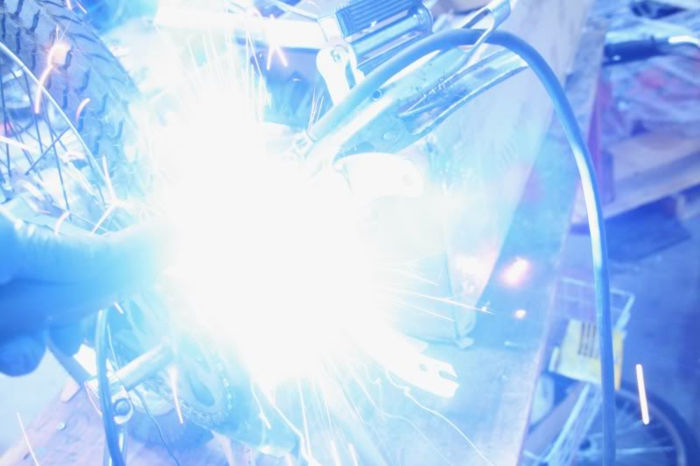 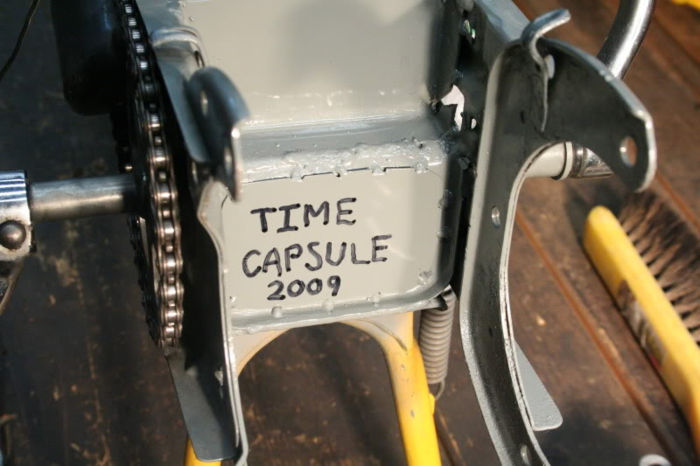 Now just a few coats of the color of my choice and a befitting plack for future generations and this mod is ready to reassemble. 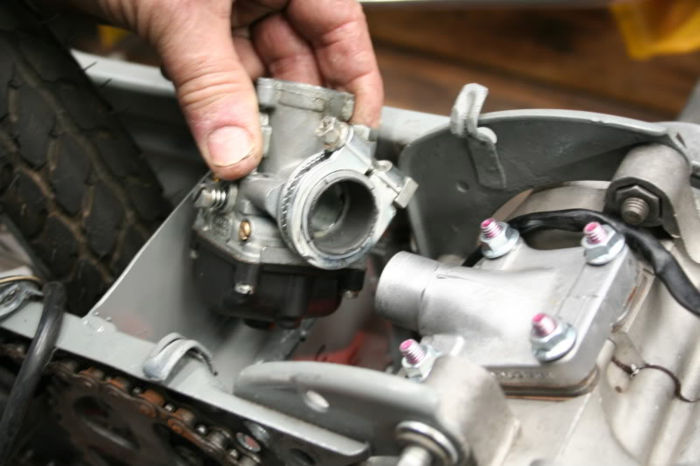 After setting the motor back in the subframe and bolting it tight, now is a good time for a few quick test fits before bolting the front frame half section back on. 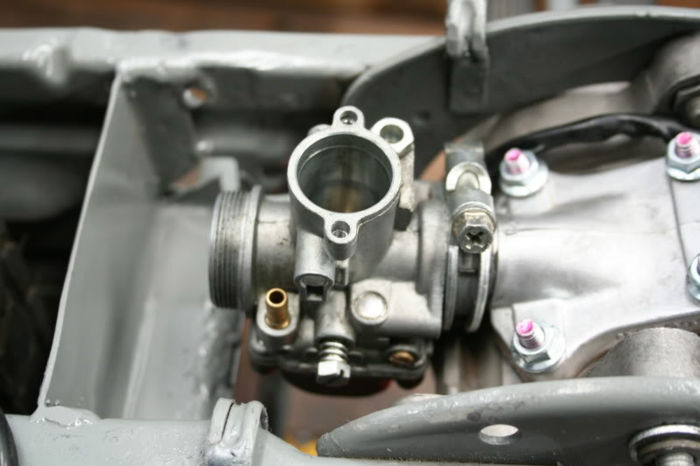 Yes, nice, looks like I’ve even got room for a treats funky shaped filter. 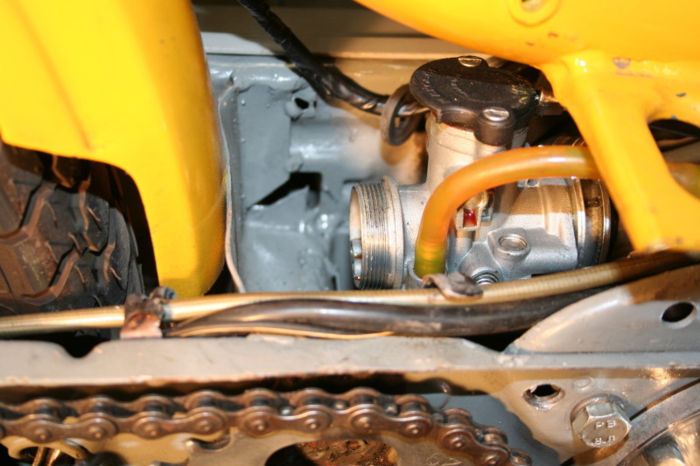 At this point I've rolled the front frame half over from it's resting place in the corner and re-attached it to the rear substructure. I like to take extra care with the electric connections at this point cause I don't want to have any
problems later on and have to part the frame again. 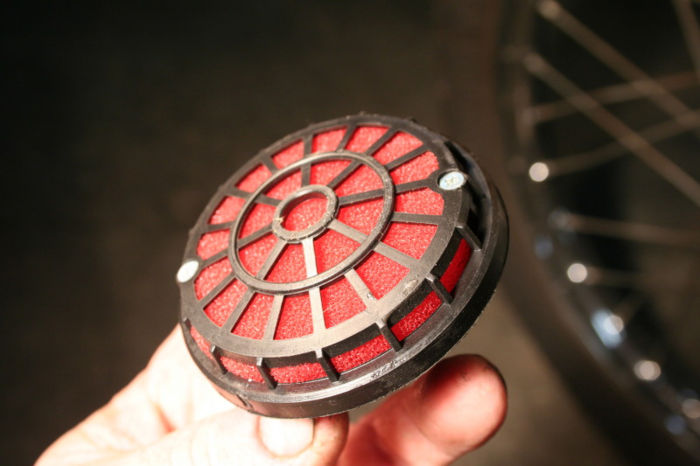 Now on to a filter, I chose this one from treatland. It was origanally a 45 angle, but proved to be too big so I whacked it in two with a hacksaw and die grinder. 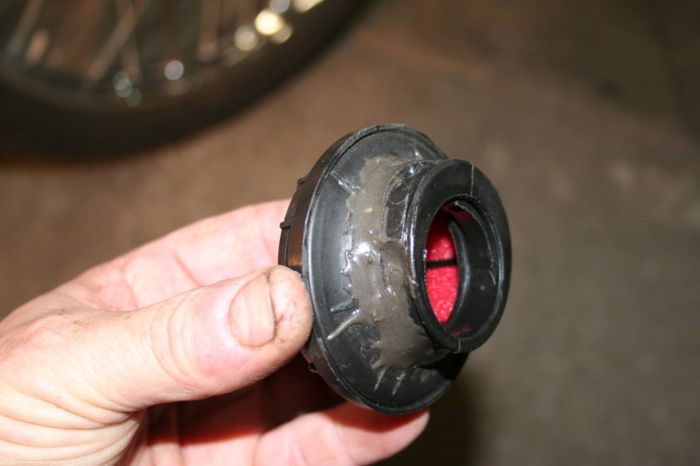 Then I simply JB welded the plastic carb collar part to the air filter housing. 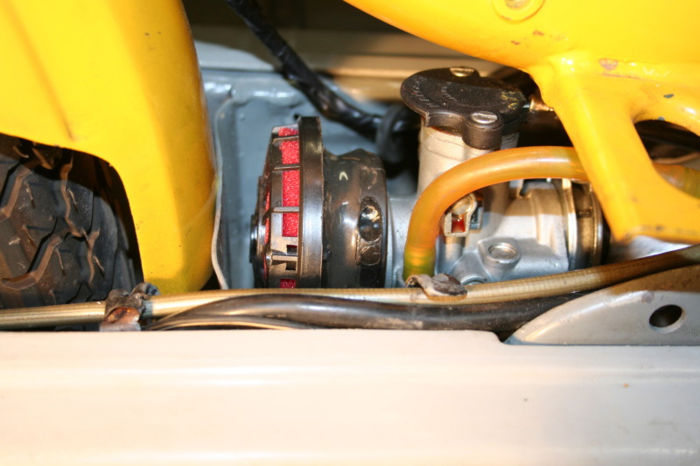 It was a tight fit but the modified filter slid snugly into place and I'm confident that it won't fall off during rough city blasting. It took a hell of a lot longer
to build this Wiki page than it took to do this Mod to my hobbit, But I'm certainly glad I mastered both tasks. Considering the type of work I do ( automobile restoration ) these type of mods are all second nature to me.
The Wiki page on the other hand was not easy foy a guy that has limited education in the ways of computers. I could not have even started such an endevor without the help of Linda "my cider" Green. Many thanks to this woman
who answered my personal E-mails that were full of noob picture posting questions. Linda said in a early E-mail reply to me: "You are in no way bothering me" She is one class act that finds importance in people's Questions. 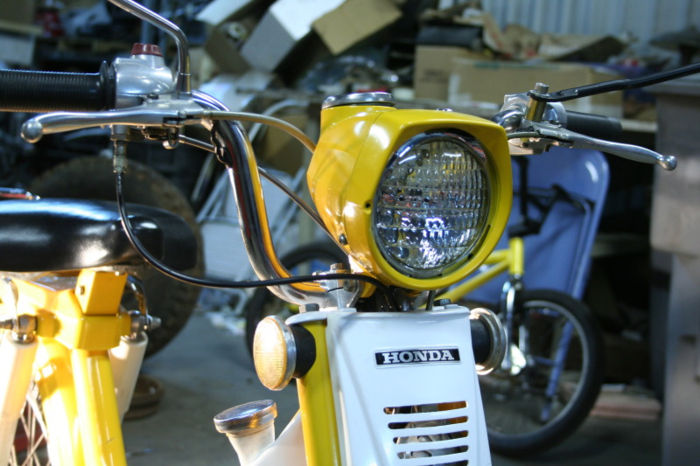 Now I like to show off some of the other Mods I did to my Hobbit. I found a set of Peugeot 103 handlebars and drilled all the holes in them same as the stock Honda bars and threaded all the wiring inside. I never liked the
"tall" feel of the stock Honda bars yet I did'nt really want them any lower than the way I have them pictured above. Any lower I felt and the headlight would be sticking up like a robots eye or somthing. I think I found the perfect medium. 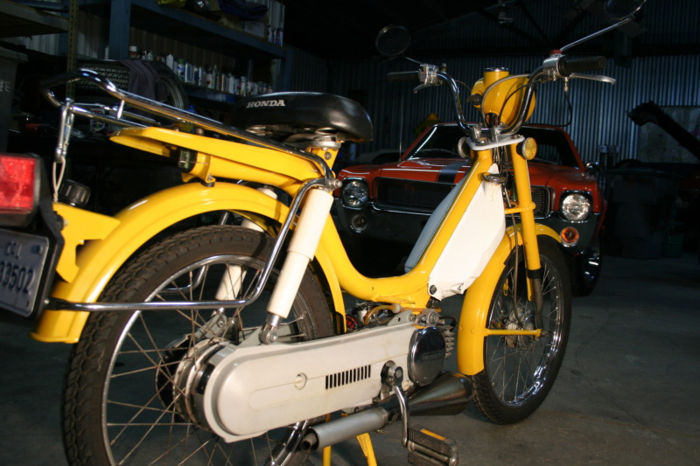 This rear end mod if you want to call it that, is the extra chrome rack extention that i took from a long seat model bike. It bolted on easy and gives me more places to hook bungees. Plus I think it looks cool, not too busy looking.
I gotta say, I love this bike and ride it to work daily. 70cc DR kit, teckno pipe, and you saw the 21mm Dellorto. It glides smoothly at 45mph. I'm offically done with this page.