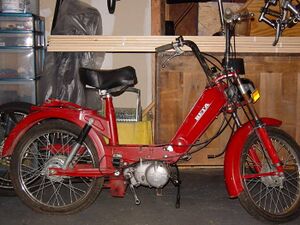 Beta is an Italian motorcycle manufacturer, specializing in off-road motorcycles. Beta are best known for their popular trials bikes. and still make Trials and Enduro motorcycles today, all the way down to the 50cc range. In the late 70's moped boom Beta produced and imported a moped called the Beta SL5. This article focuses mainly on the Beta SL5 moped.

The SL5 moped features a step through design with integrated frame tank. The motor is made by Beta and does not share parts with other moped engines. 2 models exist, a 1hp (17mph) and a 1.5hp model (25mph). The 1hp is restricted by gearing (12:44 vs 14:38), intake size on the case and by the size of the exhaust. The Beta motor is a case inducted reed valve motor, which sits inside and under the floor of the frame. They use a 14:12 Dellorto SHA carburetor and have a clamp-on flange type exhaust similar to the Vespa mopeds. The pedals are integrated into the engine and have a left side drive chain with a right side rear brake. The wheels are 16 in. It's started by pulling the clutch lever on the handlebars while pedaling.

Beta has its origins in 1904 as a bicycle manufacturing company named "Società Giuseppe Bianchi," originally based in Florence. The company started making motorcycles in 1948. The name Beta comes from the initials of Enzo Bianchi and Arrigo Tosi, who ran the company at that time. Focusing on two-stroke bikes through the 1950s and 1960s, the company started focusing development and production to off-road motorcycles in the 1970s. They produced a number of small pitbikes and mopeds using Minarelli motors before developing and using their own simplified 1 speed automatic motors in the 70's and early 80s. The SL5 was the only moped to gain any significant popularity and be imported to the US.

Through the 70's, 80's and 90's they produced a number of successful 2 stroke trials bikes. In 2000's they switched to using KTM engines and in 2008 they converted to 4 stroke motors. After 2009 they've begun making their own engines again for some of the bikes.

In 2011 a large number of 1980 Beta mopeds were recovered from an importer, completely unused and still mostly unassembled from shipping.

Note, the wiring is very confusing, from the motor Red goes to Green, "Jellow" goes to Black, and Black goes to Red. WHY?! Also, the ground for the ignition coil is accomplished through the brake light system, so that all of the brake switch wires must be plugged in and in contact, or the brakelight functional in order to run. Alternately to hardwire, the red wire from the engine can be grounded directly, ideally at the HT coil.

The "new" SL5's that have recently become available share a number of the same problems and can often be brought back to life with the following repairs:

Most all have corroded points which can be replaced or just cleaned with a nail file or sandpaper. You will probably also have to clean the carburetor. See Fred's Guide for info on cleaning points and carb. You will also likely need to replace the condenser to get spark. To save trouble you can wire in an external condenser and leave the old one in place. You can buy an external condenser for old VW Beetles at an auto parts store, or order a moped one from Treatland or doscycles.com. The condenser should be grounded to the frame through its mount and the wire on the condenser should be run in parallel off of the wire going from your stator to the external HT coil. As-received you'll need to replace/refill the transmission oil using ATF. Also it's a good idea to replace the stock spark plug with a fresh one.