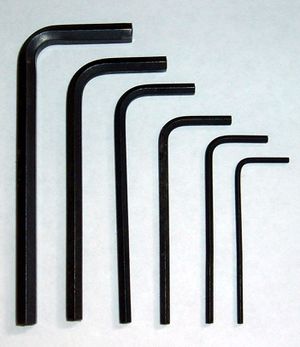 An Allen wrench, Allen key, hex key or hex head wrench is a tool used to drive Allen screws and bolts, which have a hexagonal socket in the head.

Some of the advantages of this format of tool are:

Using a single tool instead of many others reduces tooling costs for the manufacturer and is more convenient for the end user. Many manufacturers have adopted hex key bolts for assembling bicycles or for self-assembly furniture.

"Allen wrench" was originally a trademark of Allen Manufacturing Company in Hartford, Connecticut in 1943. In non-English speaking parts of Europe, it is usually known as an "Unbrako key" (also often misspelled as "Umbrako"), which is a brand name established in 1911. The brand is owned by SPS Technologies. In Germany and Netherlands, this type of screw is known under the name Inbus™, named after the company that invented them in 1936, Bauer & Schaurte Karcher in Neuss (Innensechskantschraube Bauer und Schaurte). (It is still known as Inbus-key - or often misspelled as Imbus-key - in parts of Europe.)

Using an Allen-style tool on a socket that is too large may result in damage to the fastener or the tool. An example would be using a 5 mm tool in a 5.5 mm socket. Because Allen-style hardware and tools are available in both metric (cm, mm, etc) and English (inches, feet, etc) units (with English sizes most commonly used in the United States), it is also possible to select a tool that is too small for the fastener by using an English-unit tool on a metric fastener, or the converse.

Some allen keys have a Bondhus ball on one end, which allows the tool to be used at a considerable angle off-axis to the screw. They were invented in 1964 by the Bondhus Corporation, but are manufactured by several other companies.