AMF mopeds were mildly popular from the mid seventies to the early 1980s. For the most part they can divided into two categories: Minarelli, and McCulloch. When purchasing an AMF, SEE IT IN PERSON. Don't make any assumptions as to which version it is, make sure ahead of time. 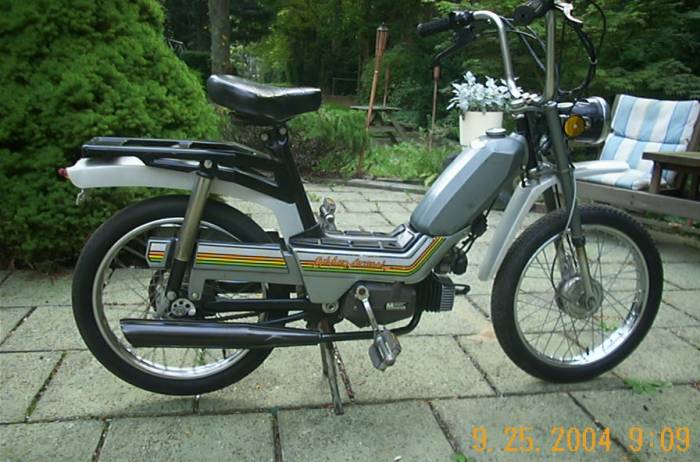 The Minarelli version which is often (but not necessarily always) designated by a model designation beginning with an "A" is a typical tube framed moped in most respects. It was heavily dressed up in plastic covers giving what would be just another Minarelli powered tube frame a unique (possibly "American") look. The quality of these bikes would appear to be decent in materials and finish. The engine is a Minarelli V1, making the bike reliable and fairly easy to get parts for -- though it should be noted that the fan shroud is plastic on this motor rather than cast aluminum. 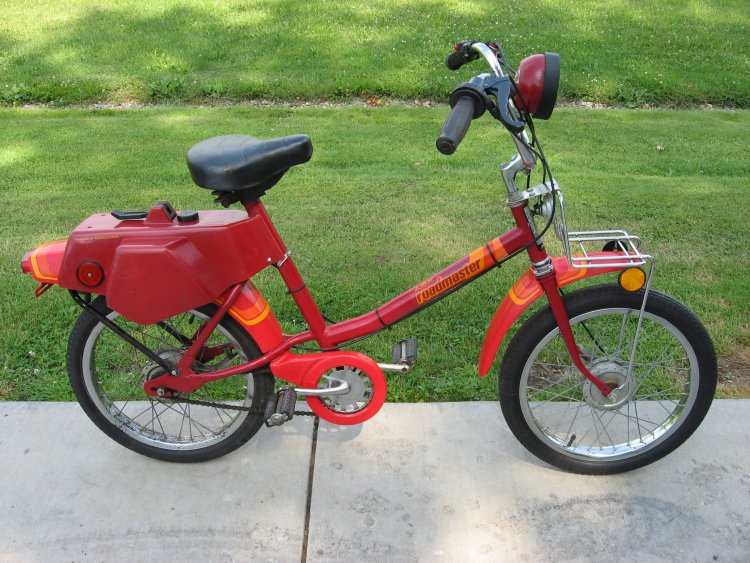 The McCulloch version which is often (but not necessarily always) designated by a model designation beginning with a "C" has sadly become the definitive AMF moped. This bike is remarkable for its unorthodox design, featuring a rear-mounted engine with a friction drive. Power is supplied by a McCulloch BHE900 engine (most likely designed for use in chainsaws) which is housed in a plastic box over the rear wheel. The frame was also unorthodox in that from the seat post forward it consisted of a single, rather long and spindly tube giving the bike a rather fragile look. This moped was not victim to any specific design flaw other than most aspects of it being under built. The top speeds typically hover around 15mph due to certain limitations of the drive system. This version was available in 3 basic trim packages including the lavishly trimmed XL. Despite the various shortcomings these were popular due to a low price and because of this they constantly surface at rummage and estate sales. This moped however does hold the honor of being THE American made moped on the market at that time (the Columbia Commuter, while its frame and rolling stock were US made, were supplied by Sachs and Solo engines, both German companies). There may be yet another page to be written about this ungainly brainchild of AMF but as of yet it is merely the butt of jokes and at best a quirky little trophy owned by collectors.