Piaggio's introduction to mopeds begin in 1967 with the "Ciao." The company added the model to its line-up as an economy vehicle targeted at a younger audience. The Ciao is still in production, but is only available to the European market. 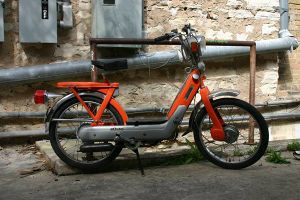 The base model Ciao featured a rigid front and rear suspension.

This model featured front suspension by a set of springs that allowed the front wheel to pivot forward. Rear suspension was handled by a large spring mounted at the bottom of the seat post, allowing the saddle seat to flex into the frame. This proves for quite a fun and bouncy ride.

Same as the Ciao Supreme - but with an added turn signal system. Metal boxes were added to the sides of the rear rack to house the 6v battery system for the signals. The front signals mounted to posts fixed to the handlebars, and rear signals were mounted by a small bracket sandwiched between the frame and the rear fender.

American Ciao's manufactured pre-1978 are noticeable by the emblem on the side of the tank with the "Ciao" logo. The Vespa logo generally appeared as a sticker on the rear of the sidecovers.

American models post '78 sported "Vespa/Piaggio" down the tank, and the Ciao typeface was located on the plastic sidecovers.

In 1974 they changed from a circular taillight to a more squared off style, similar to the CEV lenses found on the Vespa scooters at the time.

The most basic/common upgrade is a light performance exhaust, such as the Sito+, and either a Dellorto SHA 12/12 carburetor with a Grande airbox.

You can get a little more speed from a 13/13 carburetor and drilling out holes in the airbox, or purchasing a performance airbox such as the Malossi RedFilter, though this procedure ends in a noisier bike.