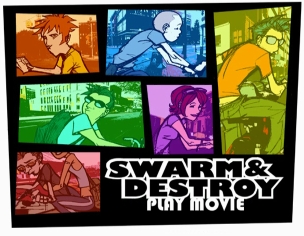 Title screen from Swarm and Destroy

Swarm and Destroy is a documentary chronicling the Moped Army and moped lifestyle. Filmed at the Decepticons' 2003 Moped BBQ event in Kalamazoo, Michigan, it contains numerous interviews with Moped Army members. It is named after the motto of the Moped Army.

Tagline: The Greatest Documentary about a Moped Gang Ever Made

Swarm and Destroy opens with an interview of several moped riders at the rally, asking how they began riding. These riders, from various branches of the Moped Army, describe their draw to the organization and the development of moped culture, recounting their favorite anecdotes of themselves and fellow moped riders. The stories they tell are widely varied—from the gruesome account of a rider named Ree who was injured in a debilitating accident, to stories of vigilante justice, and many accounts of bizarre occurrences which happened while riding.

The documentary, from there, continues with an overview of the Moped BBQ event itself and the race at the BBQ, with footage shot around Kalamazoo at various race checkpoints.

The film ends with a recap of the event and interviews about growth of the movement and the future of the Moped Army.