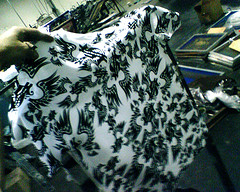 Peddy Cash is Chicago's branch of the Moped Army, founded by Curt Cameruci and Patrick Turner in 2002. Having a crew thats as diverse as Chicago's different neighborhoods, Peddy Cash embraces its city's urban environment and its setting. Punk kids, ex-bike messengers, skateboarders, art school kids, and hip hoppers are just some of the types that make up the crew. Peddy Cash has absorbed other smaller moped gangs which have become smaller factions of the larger whole, such as Murder Club and The Flooze. They are always able to turn heads with their commitment to riding every possible chance during Chicago's warm months. Peddy Cash is a forward thinking and constantly evolving gang with a primary goal of progression and re-invention within the Moped Army.