Mikuni is a Japanese brand of performance carburetors. Mikuni's range of carbs is quite large, but there are few types and sizes that are very suitable for pairing with a large bore cylinder kit on your moped. Historically they've been popular for use on scooters and small motorcycles, but with the availability of appropriate intake manifolds, they're proving great for mopeds too.

Mikuni carbs' main jets are extremely easy to change, and are also known for being much easier to tune correctly than the Dellorto PHBG. However, their larger sizes often require throttle modification or a new throttle that has a bigger range of motion; their size also makes them difficult to mount on certain mopeds.

Not all Mikuni Jets fit in other mikuni carbs. Make sure if you have a round jet, you use a round jet, if your bike came stock with a mikuni that is. Example: Kawasaki AR50s came equipped with mikuni large round jets. Using a long hex main jet will change alot in your carb. Not only are they longer, but their size numbers are measured differently than the large round. SO a large round mikuni jet that is a size #115, has a inlet smaller than a long hex jet thats a size #115. 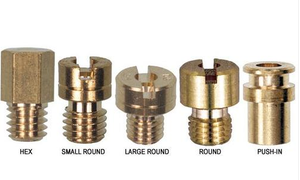 The VM series is the most popular type of Mikuni (MIK) carb to use on mopeds, and come in sizes ranging from 12mm to 44mm (12-17 inclusive, 18-44 in increments of 2). The VM is a round slide, multi-circuit, needle metered carburetor, and Mikunis in general are considered by many to be the carb of choice: "Consequently, there is little reason for choosing anything but the Mikuni unless you are very short of money and forced to take what you can get." Jennings, Two-Stroke Tuner's Manual, Pg. 140.

To make things more difficult, there are many different kinds of MIK main and idle jets, and there seems to be little rhyme or reason as to which carb takes what jets. I believe the vast majority of VMs above 18mm take the 4/042 (large hex) main jets, but the smaller VMs take all sorts of different main jets, and each size comes in various models. As I mentioned earlier, while the primary difference in models being mounting style and cold start configuration, for some god forsaken reason in some instances the jets are different as well. For example: the VM20-327 (spigot mount) takes VM11/22 (large round) main jets, while the VM20-237 (flange mount) takes the 4/042. Also, there are two different "large round" main jets, the VM11/22 and the N100.604, because, you know, that makes sense. Idle jets are equally obscure, although similarly most VMs take the M28/1001 style, with the notable exception of the VM22 which takes the VM22/210 style.

Also, bonus, any MIK carb that takes N100.604 main jets will accept Dellorto 5mm main jets. Not entirely sure if the numbering system is the same though.

A really good reference for all this non-sense is Allen's Performance. They have a really comprehensive list of Mikuni carbs (although it's not exhaustive), and list all the parts for each. But here's a present, I'll list the jets for some of the more popular carbs people are running on mopeds - don't say I never do anything for you:

There are several different intakes available for use with the VM20 and VM22 flange mounts for cylinders that have Tomos/Honda MB5/Peugeot 103 style reeds. It's difficult to mount these larger carbs in the subframe of a Peugeot or Motobecane, but the VM16s fit pretty well. Also, the VM16 clamp will mount to a SHA intake with the aid of a small shim (about 1mm; you gotta make one), takes 28mm air filters so it's not too hard to get a 32mm PHBG filter to work, and will fit nicely in place of a Bing on a Puch piston port cylinder (you gotta make a little riser to fit under the base of the intake though, or else the carb will bottom out on the top of the case). Score. The VM18 clamp will mount to a PHBG intake if you remove the stock plastic shim and replace it with something a little smaller (gotta make that too), and they take 32mm (PHBG size) air filters.

Here's the official Mikuni tuning guide. Note that the exploded diagram isn't applicable to all VMs. The sub-18mm size carbs have a different design, specifically there aren't separate main and needle jets. The main jet sits at the base of the needle, like in a Bing.

Here's some weird PDF about the differences between 4/042 and N100.604 main jet numbering systems, and what the numbers refer to.

The TM series are not nearly as popular as the VM series. They are probably just as suitable for use on two-strokes, but are commonly believed to be better for four stroke engines since they usually come with four-stroke needle jets out of the box. They range from 24mm to 40mm in size, but of course, the TM24 and TM28 are really the only sizes you'll want to consider.

According to Mikuni, the TM Series Carburetors provide significant performance improvements over older round slide carburetors. Air flows faster and smoother through the TM Series venturi due to the flat slide design and the jet blocks which help create smooth bore effect. The high velocity of the air flow means a stronger vacuum at the needle jet providing more precise metering and better throttle response.