The last of the Puch Magnum series. Only 500 were made, all of which were manufactured in 1981. The Puch Magnum Limited (or LTD) had some of the same features as a Magnum MKII such as hydraulic forks and the 2 speed ZA50 engine with oil injection. But the magnum LTD had many distinct features that go beyond the equipment of a normal Magnum MKII. They are: Limiteds came in a special color scheme (metallic off-white w/red and gold decals), matching off-white 5 star mag wheels (w/red pinstripe), a unique color matched front fairing, blacked out chrome parts, turn signals, Puch monza handlebars, a special Puch Monza dashboard with a numbered plate reading "limited edition #xxx" and keyed ignition. A 12k vdo tachometer was optional and is rarely seen today. 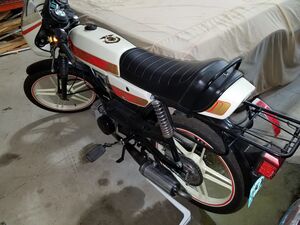 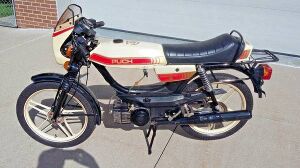 Unknown #009. Owned by Bill Murrow. Tank and plastics lost in a fire.

Unknown #010. Owned by supreme commander benji. sorry no photo, got the tank and frame from thee beloved hells satans, frame is ringo's shockin magnum, tank is restin in VA