Difference between revisions of "How To Tune PHBG Carburetors"

Here are some resources for those of us new to the world of PHBG Tunings. . .

First, you need to install a clean air filter. Second, you need to insure the float level is properly set. If the gasoline level is set too high or too low, properly jetting your bike will be impossible. A high float level will cause it to run rich and a low level cause it to run lean. A properly set float will be parallel to the base of the carb body when it is held upside down w/o the float bowl on. PHBG's always seem to come level, but its good to check. Finally, make sure to start with a fresh spark plug when tuning.

Functions of Jets and Needles

On a PHBG carb, the main jet starts functionality about 1/3 of the way through but doesn't become truly effective until 1/2 throttle. If you are having issues at 1/3 throttle, the best thing you can do is to adjust the needle setting. “Lowering the needle” by “raising” the clip up one position makes the the gas flow leaner in the low to mid throttle range. The needle is tapered so when the it is 1/4 to 3/4 of the way out, the angle of taper is what determines how much gas can escape through your main jet. Once you reach WOT, the amount of gas is completely controlled by the main jet. Actually, there is one other element to the equation: the air/mixture screw. Look at the chart see how it is moderately effective all the way through. That is because it uses a separate jet which also sucks fuel that doesn't have a needle. The adjustable screw that is flush with the carb body controls it. By turning that counterclockwise you will let a just a tiny bit more gas flow in to the system, and by tightening it you will cut that off. So you can make very small adjustments by using the screw, or you can make major adjustments by changing the jet.

Here is an Image by Bourbon Bandit MarkRyan on the placement of all the PHBG Jets. 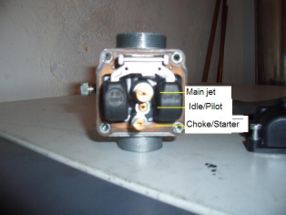 Here is image orignially submitted by a Dutch Tuner, and updated by I.R.E. Tom (the new one you can print at 7" Wide) of the Working Range for the PHBG jets / Needle . 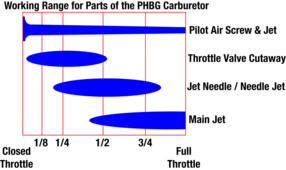 I wouldn’t mess with your needle until you’ve gotten the main jet figured out and have set your idle. Elliot seized his Polini by leaning out his needle.

Out of the Package

PHBG carbs do not always come with the same # needle stock, so it is important to check your needle # before installation of the carb. The needle # is stamped onto the needle right below the clip notches. PHBG needles come in a range of W1-W25; these numbers are not arranged in direct order like jets. You should refer to the chart below when sizing needles. The most common needle sizes that come stock in PHBG carbs are: W6 (usually in racing carbs), W7, and W9. However, they are not limited to these sizes -- I have found a W10 and W16 in stock PHBG carbs before. If your carb did not come with a W6, W7, or W9 and you are having a lot of tuning problems I would suggest starting with a W7 and work from there.

EDIT - Whether or not a W6 comes in a lot of carbs I don't know, but it's not in the same family as W7 or W9. It has a longer taper and a thinner tip, making it way, way richer. Take a look at my table in the next section.

Needle selection is somewhat of an art. One should choose a needle that delivers optimum mix at all its effective throttle positions. Unfortunately, this art is not a simple as going up or down a number like it is in jets. When tuning with needles, be very careful because an improperly tuned needle is just as dangerous as a main jet that is too lean --as I learned the hard way when I seized a Polini when experimenting by moving the clip from the perfect position to one notch leaner.

Ooh, ooh, look at this fancy table I made (somebody with better programming skills should make this look better):

To test the progression circuit, flip the throttle from closed to 1/8 throttle a few times. It should be smooth and fast if tuned correctly, and should quickly return to idle.

Most (kitted) bikes like an idle jet somewhere between 45 and 55. Also note that the idle jet serves two purposes: to supply a minimal amount of fuel to keep the bike running at idle, and to supply fuel to transition from idle jet to needle jet (a la the progression). At idle, air flows into the progression hole, picks up fuel from the idle jet, and comes out the idle passage. What comes out of the idle passage is metered by the mixture adjustment screw in addition to the idle jet. During progression, flow through the progression hole changes direction; instead of air going in, fuel comes out. This is not affected by the adjustment screw, rather it is solely metered by the idle jet. Because of this, it's possible to achieve a decent idle that results in poor progression. For instance, if you have to turn the mixture screw all the way in to achieve a decent idle your idle jet is too big which is likely going to result in a boggy progression. But, needle taper, needle clip position, and throttle slide cutaway will all have an effect on progression as well.

PHBG carbs come with one of two types of choke mechanisms that can be specified when bought: cable or click. Cable chokes work similarly to the throttle cable and require a second cable to be installed and fed into a lever. The click choke works by pulling up and twisting the knob on the carb. MOST BIKES WITH PHBG CARBS WHEN PROPERLY TUNED WILL NOT START EASILY W/O THE CHOKE ON! If you find yourself pedaling for a long time before your bike kicks over from a cold start, it's because you are not using the choke. The choke jet is always at 60, and I have never needed to change it. If you are new to tuning PHBG carbs and don’t know what to feel for, one trick is to use the choke to gauge whether you are too rich or too lean . If you're not sure that sluggishness is a lean gasp bog or a rich gurgle load (because it's not really obvious if it's only off by a bit) just flip the choke on. If the bike gets better at that throttle position your tuning for its too lean and vise versa.

Don't remove the black rubber caps they will cause air leaks. These nozzles are for vacuum lines and are mainly used on four-stroke motors. If your carb did not come with these caps, tape them up on the brass nozzles. (I am not referring to the overflow outlets that face downward and are "L" shaped and on either side of the upper carb body. Leave those open).

Stock moped throttles for the most part can not fully open a PHBG carb slide. For proper tuning, it is advised that you install an aftermarket throttle assembly that can fully open your new PHBG carb.

Note: Atomizer & Slide will dictate/control/change the range of rich and lean of the plot/idle jet. If you run a PHBG, it is recommended that you check the atomizers first before installing the carb; because Dellorto supplied shops with some PHBGs with four-stroke AN atomizers, and the 9562 AN type atomizer bushing. If the atomizer part number starts with AN, it's a four-stroke atomizer, and it may be more difficult to tune and run very rich at idle and too lean at the 3/16 to 5/16 throttle position on piston port engines, more so than set ups with reeds. All two-stroke atomizer part numbers start with AU and use the 9655 AU atomizer bushing. Links [1] and [2]. 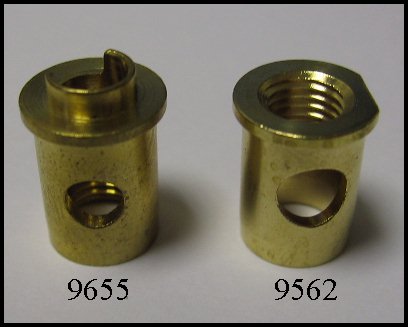 NOTE:If you have reed valves

How to ID your atomizer and atomizer bushing


Remove your air filter and bring the slide up to WOT. Look in the down the carb bore. The two stroke AU atomiser bushing will be sticking up 2 or 3 mm from the bottom of the carb boar and will have a C shape. The four stroke atomizer bushing will be flat. Alternatively, remove the main jet and atomizer.

The stamping on the two stroke atomizer will be:

The stamping on the four stroke atomizer will be (NOTE four stroke will have pin holes running up and down the sides):

You must replace the atomizer and atomizer bushing together to change your PHBG from a four stroke carb to a two stroke PHBG carb.

How to remove your atomizer bushing.

To install the atomizer bushing.

How to adjust and select idle jet and atomizer.

I hope this helps, Crazy Wayne out.

It is important to note that a PHBG carb or any multi jet/circuit carb can have several differently tuned throttle positions. For example, one could have a rich pilot jet, the correct needle setting, and a lean main jet. One might think their bike is tuned correctly if they never give it full throttle for more than a few seconds and are always effectively at 3/4 throttle or "riding in the needle" while tuning. While putting around it may 4 stroke due to the rich pilot jet setting, and one might think the bike is too rich. After a couple hundred miles post-kit break-in, one may gain some confidence and go for an extended WOT run and seize due to the main jet being too lean.

As such, it is important to think back to the chart above when tuning your PHBG carb. Each fuel metering element comes into play at different throttle positions, not only different RPMS, or speeds. Remember to feel all throttle positions to accurately gauge what areas need attention.

SO when tuning the main jet make sure to be at WOT, or you are not getting an accurate main jet reading. Start big and work your way down. If the bike is slower at WOT than at 3/4 throttle, the main is still too big. When you are really close to the perfect #, the bike will be the same speed or only slightly faster at 7/8 throttle than at WOT. This is your safe zone, be very careful when down jetting past this point.

You can also change diffusers. There are a few sizes as well as slide cutaways (or throttle slides), but on a single speed bike it's not really worth getting too involved here.

Click on chart and diagram for slightly larger versions. (Clicking on them will take you to the image page where you can click on "download high resolution version" right underneath the picture.) 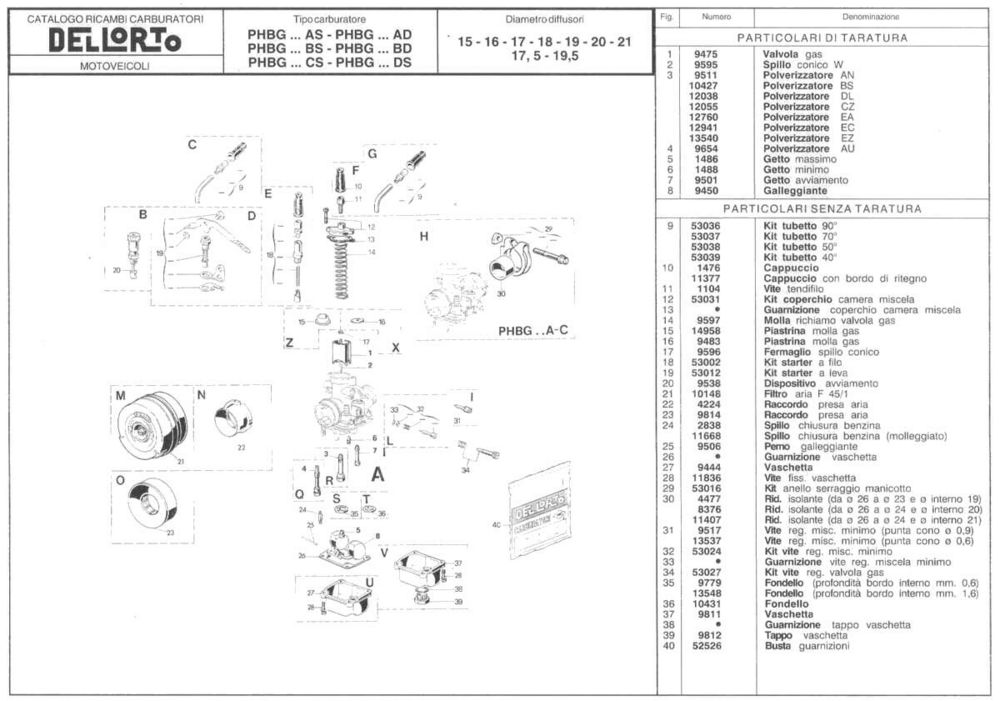