Difference between revisions of "Foxi"

Foxi and Sparta mopeds root's were formed in Holland between 2 company's that manufactured 2 unique models under the same Foxi name and logo. Sparta produced the more common model as the Foxi GT Sport, and the Sparta Buddy. The frame and design was a progression and evolution of the Sparta mopeds from the past, and shares similar features all the way back to the 1950's models. KTM produced the alternate model which used it's own unique frame, the Foxi Deluxe Automatik. The brand Flying Dutchman also sold an identical model of the Foxi/Sparta under their own name. All Foxi/Sparta mopeds were imported by United Mopeds in the 70's.

Though made in Holland, all Foxi/Sparta mopeds have the common German 47cc , 1-speed, Sachs 504/1 A engines, Bosch electronics, and 16" spoked LeuLeu wheels. The 30mph models are equipped with the Sachs Bing 85/12/101A carburator and larger header pipe. Less common are the restricted 25mph models, which came with the Sachs 85/10/101A carburator and a smaller header pipe. 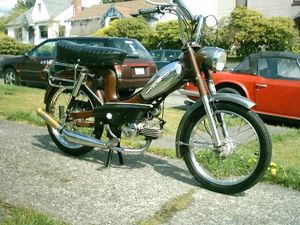 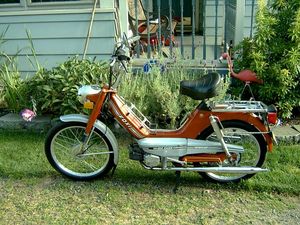