The E50 engine is the one speed engine found on many Puch mopeds. Variations on the basic pedal-start E50 include the Korado engine and the kickstart E50, which was used on the Magnum X and some Korados. 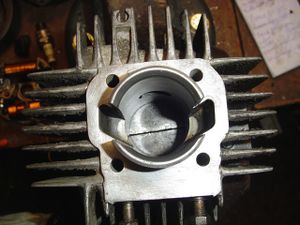 There were the aluminum series cylinders, which have completely open transfer ports and are completely aluminum, with the exception of a plated bore. These cylinders are typically stamped with single digit designations like 1, 2, 3, etc. Some of these cylinders also came with very large intake ports where they connect to the intake manifold. However, the stock Puchintake manifolds and carburetors only came in 12mm and 14mm sizes, which do not take advantage of this large intake port. 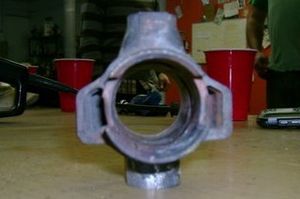 The cast-iron bore of a high torque cylinder

The other series typically found on E50s is the "hi-torque" or cast-iron series of cylinders. These cylinders are distinguishable from the aluminum series, because instead of having a plated cylinder bore, the bore is a part of a cast-iron cylinder sleeve which is surrounded by the aluminum cooling block/fins. Additionally, these cylinders were often painted black from the factory, but the paint had a tendency to peel off with time. These cylinders had closed transfer ports, and were given stamped double digit number designations, like 11, 22, 33, etc.

The last series of stock cylinders manufactured for the E50 and ZA50 was the Magnum series. These cylinders have physically larger outer dimensions, but they retain the same 49cc displacement as the other stock Puch cylinders. Like the "hi-torque" series, they had cast-iron cylinder sleeves. They also featured an angled exhaust port, which is different than the flat exhaust ports on the aluminum and cast-iron series.

The Magnum X dirt bike used the same cylinder as the Puch Magnum, except that it came with stock a 17mm "bendy" intake, a 17mm Bing carburetor, and an intake port to match. See Puch Magnum X for more information.

In the 1990's, Puch (then owned by Piaggio) manufactured the Korado. The cylinder that came on this moped is aluminum, has a good squish band, came with large bridged transfers and a boost port, a single dykes ring piston, and an angled exhaust port. This cylinder/top end is highly sought-after by many performance tuners, because even without modification, it can perform better than some kits.