In no particular order.

Founded by Chad Burke, who was a Decepticon for 15 years and continues to serve and support the moped comunity of Kalamazoo, both with parts and repairs as well as loaners for Decepticons without running mopeds at rallies/events. 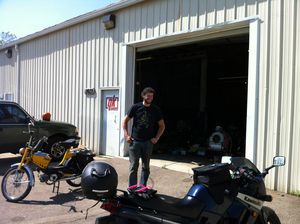 The Kalamazoo Building was built by an army of Charles Mercadal clones. We are still not sure if we have the real Charles or not.