Most mopeds will have two clutches, a starter clutch, for starting the bike and a centrifugal clutch for making the bike go. Designs of these essential components vary widely, but all are similar in principle. 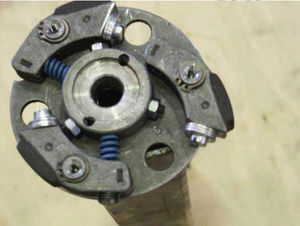 When installing a new clutch, it is important to check the distance between the pressure plate and the face lining of the clutch. If the gap is between 0.012" and 0.020" your clutch will engage, if the gap is larger the clutch will not engage fully when the lever is pulled.

To measure this gap use a feeler gauge between the castellated part of the clutch drum and the pressure plate (the flat bit on the "back" of the centrifugal clutch) if the distance is greater than 0.012" and 0.020" you will need to adjust it.

First things first, this is easier to do on the bench and therefore I'm going to describe how to do it that way, it maybe possible in situ... I'm also going to assume you know how to dismantle and remove your clutch.

Before you take anything apart - check your end float The end float is the distance between the circlip nearest the bearing and the primary gear, this distance should be 0.004" and 0.008" - if the gap is larger - you'll need to change your shims.

To measure this distance, pull on the clutch housing and slide the feeler gauge in