Bing is a German carburetor manufacturer now named BING Power Systems GmbH located in Nuremberg. The company was founded in 1866 and has a tradition of 75 years of carburetor development and production. Over the years BING took over companies like Erich und Grätz, Fischer-Amal, Pallas, Encarwi , FHN. In 2001 the company S.U. ( Skinner Union ) Birmingham was taken over by BING Power Systems GmbH.

A list of part numbers for Puch Bing carburetors with specific model information and/or a list of stock mopeds they are found on:

Infamous for existing, but virtually unheard of on U.S. market bikes. Extremely rare.

This is the only carburetor used on the US imported Solo's. It has both a spin off bowl and slide cover. similar to some "race style" motorcycle carburetors. It's small 10mm bore limits it's usefulness for performance applications. This same carburetor was sold from the factory bored out to 11mm. A 12mm bore is safe as well. Anything over 12mm will result in the fuel bowl vent circuit to become exposed. This can be fixed with epoxy. Theoretically it could be bored to a 14mm, although the slide it self is only 14.5mm and leakage of air around the slide would be likely.

This is the same jet as the one used on the common Puch bing carburetor. An entire range of larger jets are available.

This is the only needle produced for this carb.

A range of sizes are still available. 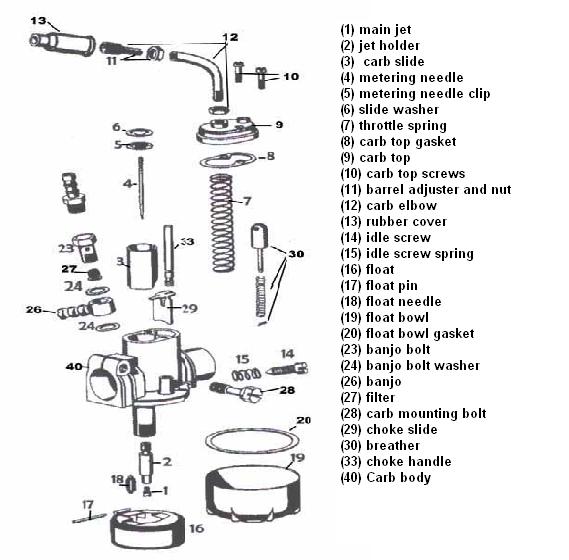 Based on diagram from "http://www.themopedjunkyard.com/"