Batavus Intercycle Coporation was the leading manfacturer of bicycles and mopeds in Holland during the 1970s. During its most productive years, the company’s 3ft. Herereveen, Hlland plan employed 700 craftsmen to produce 70,000 Batavus mopeds and 250,000 bicycles a year. During this time the Batavus was exporting 55% of its production with the remainder going to Holland which had more than two million moped on the roads as of 1977.

Batavus originated in 1904, when Andries Gasstra opened a shop in Heereveen, selling clocks, watches and sewing machines. Bicycles were soon addo the catalogue as two-heeled transport gained in popularity, and the original business was discontinued when Gastra acquired the sole Dutch representation for the German bicycle, Presto. He later started selling bicycles under his own brand name, Batavus.

During the 1930’s, Batavus began making three-wheeledport bicycles equipping them with an engine a few years later. At the same time they produced their first motor By 1940 when Holland was invaded, Batavus employed some 120 people War, the company made rapid strides and a new project which had started out as a bicycle with a motor was soon developed into a functionally designed motorized two-wheeler, with rear-wheel suspension for riding comfort and a creditable performance. Long-distance rides on Batavus machines were taken through the nited tates, and to places like Morocco, Alexandria and Baghdad, to help popularize the name outside Holland.

By 1954, the company was operating from an assortment of buildings, producing a variety of machines, but in 1956, just 52 years after Andries Gasstra opened his shop, a new factory was opened in the dust park in Heerenveen. The new factory had an area of 6000 square meters and the workforce had grown to 1. Further extensions and developments became necessary and today the company employs about 650 people in a modern factory which uses advanced design and manufacturing techniques. After the new premises were opened the company continued primarily to be a bicycle manufacturer and benefited from the growing demand for bicycles, not only in Holland, but all over the world. However, in 1969, Batavus acquired the bicycle and motorcycle production of another Dutch company, Magneet, and in the following year took over an amalgamation of three famous three-wheeler factories in Germany. Although their sales of motorised two-wheelers were subjected to increasing fluctuation, with various model and style changes, there was steady growth every year. 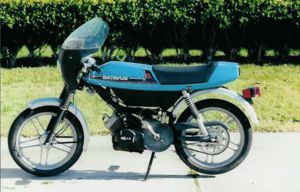