I like upgrading my moped to it's fullest potential, and making it have the most torque, not really the most speed.(although speed is good) I also love tweaking with it almost every day, just to see if i can get that little bit of an advantage. :)

As for my little Honda express, well I might keep it all stock. And my Newport, is well, in pieces. Gas tank rusted beyond repair, piston warped, not to mention rust everywhere(I bought it for $30). The engine is in the process of being restored, as well as other parts from the same bike. Eventually some of them may be put on Ebay, that is if I don't decide to use them to build another bike...

I use Royal Purple two-cycle TCW 3 synthetic oil in all of my ped's. Best oil that I've ever tried. Royal Purple,"the performance oil that out-performs". 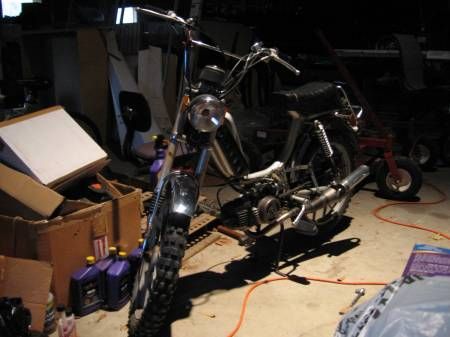