A guy In a brand new sports car, all the bells and whistles,
is stopped at an intersection when a old farmer on a rusty
moped pulls up beside him. The guy in the sports car rolls
down his window and says to the farmer "Hey what is that
thing?" to which the farmer replies "It's a moped"
The guy says "how fast will it go?"
"Fast enough."
"How far you go on a tank?"
"Gets me where I want to go."
"Well good luck to you!"
He shakes the farmers hand then rolls his window
back up, the light turns green and they go and of course
the sports car goes alot faster and leaves the moped
behind. After about 10 minutes the guy in the sports
car looks in the mirror and see a single
headlight
in his rear view mirror. Looks again a moment later and
realizes its the farmer on the moped...and he's GAINING
on the sports car which is doing more than 100!!!

The guy pull off to the side of the road and waits for the
farmer to catch up, but instead of stopping the farmer
just ZOOOOOOOOOMS!!! past the sports car
and
disappears ahead. 2 minutes later it comes ZOOMING!!!
back past the sports car and disappears in the distance
behind the car. Another minute and it comes ZOOMING
back and slams HARD into the back of the sports car!!
The guy jumps out and runs around to the farmer and says
"Are you alright!!??"
"No not really..."
"Is there anything I can do to help?"
"Well sure..."
"Just name it!!" and to this the farmer replies........
......
......
......"Roll your window down and let my suspenders out of it!! 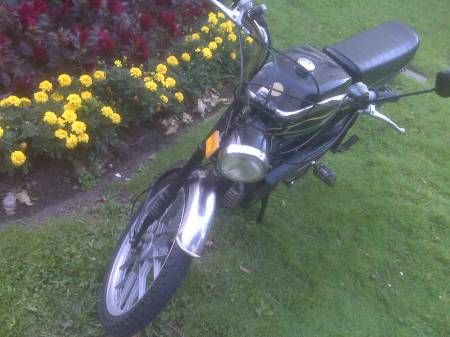