Been keeping two AMF C130 Roadmasters going for nearly 20 years now. I now have two more, and after much scrounging and digging and sore knuckles, I have all four C130s running. I now also have an A110 that is somewhat fancier, and is now running well - so now I have all five running. Additionally I have a Suzuki FA50 in good condition, that was originally obtained as a "basket case" - Actually!

I was informed many years ago that the AMF throttle controls are virtually unobtainable. I found a pretty good method for repairing them.

I was also told that the tires (flat surface used as friction drive surface) is no longer available, so I am considering taking off the front tires, for later use as drive tires, and putting bicycle tires on the front.

I like the old AMFs because they are really just motorized bicycles, and will not raise any eyebrows when seen "pedaling" on bike paths. Also, as a kid, I had always wanted a "Whizzer", but my parents wouldn't let me have one! - and the AMF's are somewhat similar.

After I got the first two fixed and running, additional AMF's kept turning up, and I deleloped a pretty proficient understanding of both the mechanical and electrical systems. (They have an electronic ignition system, which is "potted circuitry", so it is necessary to find a source of these ignition modules, which so far are fairly easy to find.) 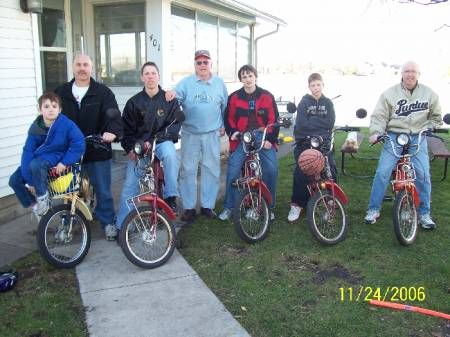