Hey guys, My names Allen, I'm 19 years old and I live in Palmer, MA. When I was 15 a friend of ours parents was getting rid of some "trash" sitting in thier basement. In this "trash" were 2 1980 puch top tank mopeds virtually in mint condition. He told his parents that he knew 2 kids that would love them. He and my father went and picked them up brought them home, changed the gas in them and pumped up the tires and I think my brother and I rode them for like 4 hours that night. Ever since, I've been hooked on anything with 2 wheels. I love to mountain bike and I love mopeds and motorcycles. Me and my younger brother Jon have been in love with these awesome little toys ever since that night. I love to tinker with them and change stuff around on them and just learn how they work and cool stuff outside of my normal life of work and planning for my and my fiancee's wedding. I'm always looking for hot deals on them so I can buy them fix them and sell them. One day I would love to collect them but unfortunatly now I cant cuz I dont have the time money or place to keep them. 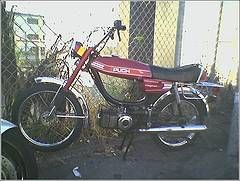