i love to work on mopeds, and most ppl think i am crazy for working on mine all the time...

the 2001 tomos targa lx is being worked on now, it was wrecked when i bought it and then i robbed it like hell for parts for my other 1999 tomos targa lx...well now i have the crazy idea to put it back together and sell it....i hope it will work out

my 1999 tomos targa lx runs very good all i have to do now is make it faster,althoughit has topped out at 58 mph on flats and that was tested out on a gps...soon i might be doing more machine work to make it have more power

my columbia commuter runs and is in good shape, it runs about 25-30 mph which i don't think is bad considering it is all stock and has a very small gear in front and a big ass gear in back... 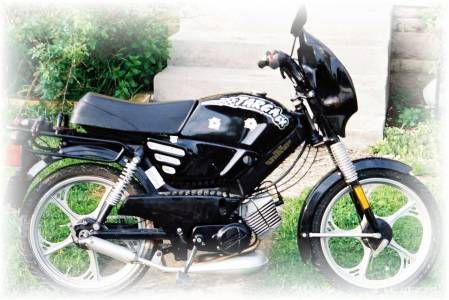