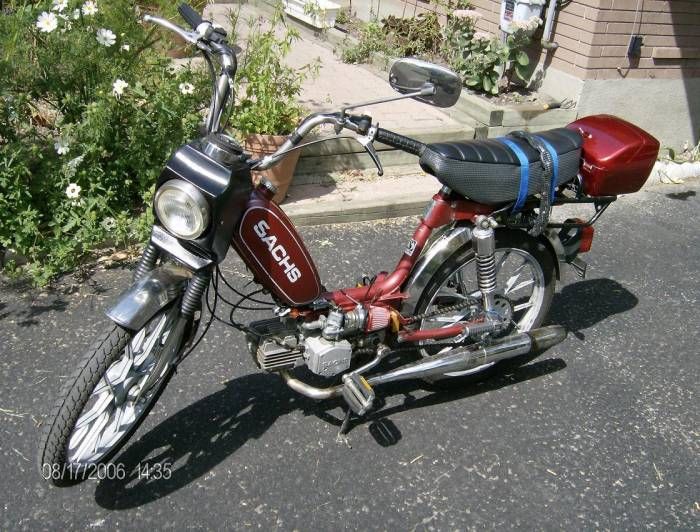 This is my redesigned Sachs Prima5. When I first bought this ped it looked very unremarkable to the point of boring, that was last year. This year I was hard at work trying to get the right 'look' for the bike to suit my riding style and tastes, a true franken-ped only the basic frame parts are original, everything else is handmade or substituted with parts from other moped brands to gopeds. I did however retain all original parts so that in case I do sell it someday the new owner can go crazy like I did.

The engine has been enthusiastically overhauled by Mr. Robert Smith at SMCMopeds and all internal engine parts (1900miles) have been replaced with new ones, the engine case is original as is its sprocket. I had Smitty perform port flow enhancements to a 65cc Autisa cylinder to maximize low and midrange power coupled with a 16mm Mikuni carb and intake, the large red filter is a velocity stack type used for gopeds, the filter tube if a freeflow filter tube purchased from 1977mopeds. The points have been replaced with new ones, I also replaced all the worn out nuts and bolts throughout the bike. The original handlebars were too high considering the height of the bike so I lowered them. Front and rear tires are new Michelin Gazells 2.5"x17" and rated for 60mph. The original Sachs shocks were terrible so I had I replaced it with large coiled chrome shocks of a Kawasaki KZ750 motorcycle that I bought off ebay. The black fairing in front is from Handybikes but it didn't fit properly so I had to cut and snip here and there to make it work. The frame has been reinforced at the rear just under the seat. The large black seat was taken from a Garelli and it rests comfortably on a Tomos rack which also carries my luggage box. Inside the luggage box I had designed a simple lighting system for night riding, after almost being hit last year because I wasn't as visible I wired a set of 4 ultrabright led's under the bike, two white and two amber, the luggage box also holds my essential tools like screwdriver and sparkplug remover, spark plugs, rag, and the battery power source for the lighting. The lighting switches are mounted innocuously atop the box. I also bored some holes in my riding jacket and inserted several separate LED's inside , the wiring can clip onto the battery power source at any time to receive power and illuminate my upper body at night. Power is supplied by 16 AA sized batteries wired in parallel. Trust me, when the lights go out not only can you see me from 300 metres but it looks hella cool too! Unfortunately finding a performance exhaust has been very tricky since the only one made for the 505d is the Gianelli and they haven't produced the pipe in years, all that is for sale is NOS and the supply is dwindling, even with the engine enhancements I'm at a modest 38mph, it shoots to 42mph at night b/c I can't optmize my jetting. If I get a hold of the Gianelli pipe i'm expecting to break the 45mph.

This is no joke this bike is extremely powerful and at nighttime, it accelerates at an even faster rate than daytime riding. Me and my girl together weigh 330lbs plus the Prima's lardassed 150lbs. The Prima takes us up to 30mph in like 8 seconds. It is also a very reliable bike it starts first kick every time no matter what conditions, rain hail or high heat courtesy of Smitty's hard work and a bi-monthly dose of Marvel Mystery Oil. I recommend SMC Mopeds with 5/5 stars because I'm very pleased with the work done for the money supplied, he did just as I asked, and I now know who will be taking care of my advanced engine enhancements from here on out.