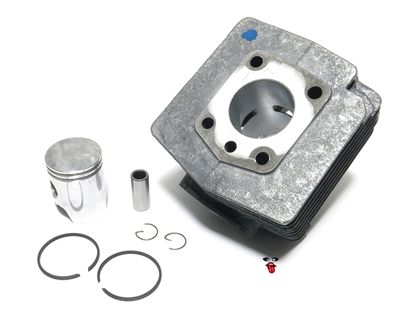 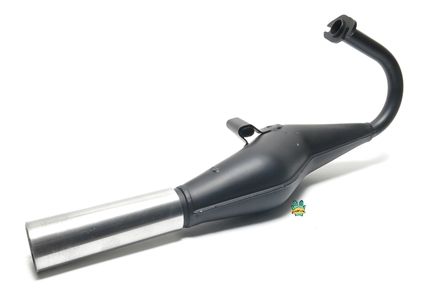 Lol yeah. I have a box of spares I'll send you.

Dammit! This is how it starts. That's what I figured, this engine came from you, to pat, to Pete...

Yeah if you come across a decent stock cylinder and piston and one of those stockish pipe let me know what I owe ya.

That stock setup is pretty Quick. Matt had a completely stock setup with that pipe and it was probably the fastest “stock” moped I have ever ridden.

Guy in the bushes: pssssst, you like that stock AV10? Well I have some Polini race cases you should try....

Was it the Dakota? That bike was fun.

I have top ends, exhaust, cdi, and other little bits in my way that you can have. I'll make a box up and you can experiment.

Ya! That Dakota is a cool bike. Only stock AV10 I have ridden. He fixed the gremlins and that thing ripped! Stock pipe no porting, just French tech for fun.

Yeah that's kinda what I'm thinking, just stock stock, you know. I've built a couple av7 stock that were well into the 40s, throw a clone sha on there and make a nice cruiser that bums out kitted puchs.

I also wanted to document it and show like, what's the actual bare minimum that you can do to build av10 on a 50v frame, I've got a really clean unmolested 50v and I was thinking like swap everything over and see how it goes. I know all that info has been posted but I've never seen it all laid out clean in one place, and most people do sensible upgrades, but what's the absolute bare minimum?

That is a awesome idea! Please do that! Would be great information. Everyone always says dong get a MBK bla bla bla....it can be a money pit but you can always make a sensible blaster.

Ive never had my hands on a Dakota cylinder is there porting better then a normal av10?

The exhaust port seems annoying though, since pretty much all the pipes use the screw in style

but hey you've got a welder, go nutz!

Dakota is the same as any other stock cylinder really. No real benefit to it but you can weld a flange on a ball joint like you said. Its easy.

I see a lot of the guys on the French F-B group using that style pipe, the leovince one seems popular and every leovince pipe I've owned has been on point, so was thinking that might be the ticket, otherwise I'm down to cut up and mess with a stock or restricted one too.

This thread wins "most logo posts"

Moped army Members still like Graham and his av10 build

Yeah it's funny, you post some crazy next level 70 mph blaster shit and everyone is like 😒 seen it....

Then you post some stupid stock garbage and everyone's super stoked. Go figure. It's gonna be a little while before I can get to it but I'll document it good when I do.

Once again dos is boss, secret Santa Blake is gonna hook me up, first taste is free!

I sent out a box today. I have a stock style exhaust in storage I'll dig up and I can't find my good top end but I will figure out where it went.

I've never cut up any of the leo Vince stock style pipe but I think the big "pro" on those is that they aren't totally clogged up with carbon. We've had a handful come in on Spx and one moby. I couldn't tell a difference but they were used and possibly also clogged up. I did find a full chrome one on a parts bike while digging around which is neat.

I have open mouth kissed every logo member here so far.

> > This thread wins "most logo posts"

Was just browsing and clicked to see what Graham was up to. Stock moby mods are a hot topic at the moment.

Yeahhhh man next time you're digging around grab me one, I got money, I swear I'm good for it.

I had to break the logo run

> I had to break the logo run

such a shame we have to kill you now

stock tech is the sickest

> stock tech is the sickest

Stock stock they only spin at 5100rpm, little mild porting will put her to the 8500rpm range. The reeds give a longer usable curve so you will have a bit more fun than a warmed up AV7

Goddamn the pusherman.. I have been tempted to join the AV10 dark side for way too long now. Treats sale again? noooo...must.... resist..

Hit up dos, that's where this engine came from. They have a bunch of used junk that is probably cheaper and better than the reproduction china stuff on treats. This engine came with a good crank installed already.

I'll take some good pictures or maybe even a little video and put everything from the av7 on here, it literally looks about as hard as swapping a a35 into an a3, I've just never done it.

Thanks for chiming in Reb, that's kinda what I'm hoping for, ported with one of the late model style pipes, 8k rpm range with really good torque. If I can get a solid 45 and pull hills at 40 - all with stock like reliability- I'll be very happy.