Anybody see any issues with creating an adapter to flip the stock intake directly upside down?

I feel like I'm missing something really obvious or just really stupid when it comes to measuring rake and trail. All the bikes I'm looking to mimic are in the range of 22 degrees of rake with 3.5" - 4" of trail, and I'm over here bumping up to 28 degrees to get 3.5" of trail. Even the kx125 is looking at 4.13" of trail with a 26 degree rake. Obviously the front wheel is WAY bigger, but the offset is almost definitely the same so I'm pretty blown away by these numbers. Also comparing with Joe S's build, (he used a kx65 front end, but looks to be identical offset), he was telling me he had about 4" of trail but my measurements are showing 3", SO I'm probably measuring wrong. Any help you could give would be greatly appreciated! 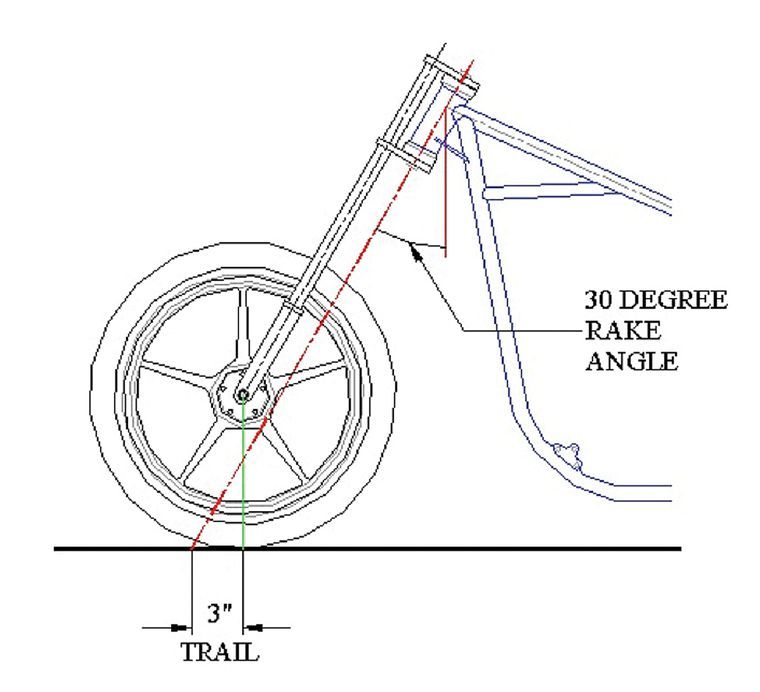 Measure from the center of the head tube

Bumping this after a long time with some updates! Frame is mostly done, as well as the engine brackets!

Next big step is going to be getting exhaust for it. I spoke with Daniel from Magic Touch, who has been a HUGE help throughout this entire project, and he recommended the Doppler pipe for the Moby, as it's going to be following a similar path etc. I just wanted to reach out and A) see if anybody had one they would be interested in selling B) any other recommendations? I was thinking there might be a 100cc bike exhaust that would also work (something like the ones on the race RD350s). Bike is running a malossi h2o kit, mikuni vm20, and some Chinese reeds similar to the v force.

Any full size race pipe is going to be more money that just buying a doppler. I would start looking for something for Pug, as it's flatter than the Moby variant of the same pipe.

Doppler is right for this setup, once you chop and weld it into place.

Cool! The bike will be quite a bit longer than a Moby/Pug. Thoughts on extending the stinger? Can't remember what that does to the performance.

Crazy. You made it into a derbi.

Hahaha, yep, pretty much. Hopefully the payoff of the effort for the brackets will be that it's easier / cheaper to tune in the long run.

Also I have a dream that my machinist friend who built this could cnc these brackets for a lot less $$ than the initial build (for obvious reasons), and set others up with the ability to do builds like this.

Oh man those pics failed on my phone. I even changed to the desktop site and it was a no go. Super excited to see this build.

> Oh man those pics failed on my phone. I even changed to the desktop

> site and it was a no go. Super excited to see this build.

that's because Google does not host third party ...

To see those pics the poster has to posts links to each pic .

Or right click the space that the pic should have been in the post and hit 'Open link in a new tab' .

> Hahaha, yep, pretty much. Hopefully the payoff of the effort for the

> brackets will be that it's easier / cheaper to tune in the long run.

> reasons), and set others up with the ability to do builds like this.

I would be and im sure many hobbit dudes would be interested in this. probably could sell thru treats or dos too.

what belt did you end up having to use? also whatd you do for the sprocket?

Sorry for the delay on this! Here's an album

Ended up using an AX20 belt (we'll see if stretching is an issue, fingers crossed it isn't). Sprocket is a Puch sprocket attached to the Hobbit hub (which I'm stoked about - this means I can change gearing ratios!) with a Puch rear wheel.

Using a pull-start, but also have a one-way bearing so I can push start if I want to.

put a slot on the bottom of the bracket for the rear transmission bolt so you can adjust belt tension - or am I missing something else?

Considered that, but it would bugger up the chain to the rear wheel. I'm thinkin a bit of stretch is okay, as I don't need to pedal start it

Can you take a pic of the sprocket side?

Hahaha absolutely! I'm curious what the effects of extending the stinger on the Doppler exhaust would be - I would love something that matches the length of the build, and it's a 50" wheelbase.

ALSO, as far as I can tell making V-Force reeds work for this would be bloody expensive. $150 for the reeds, $150 for the intake/mount for them (if you take a look at the engine positioning it'll need to be something custom that angles up). I was planning on just making one myself, but I moved cities about 2 months after this project started, and it's still at the machinist's in Seattle (I'm in Portland now), and I'm just not super confident about fabbing it in a trip up there.

One idea from Magic Touch (Daniel) was to use some other 4 petal reeds that were cheaper and smaller, so would be easier to fab the intake for them, but I wanted your thoughts on the whole thing!

If you want to check out his work, hit up @mckinleyalansmith on instagram!

Also also, down the road I'm considering going to a stage6 kit (in a few years probably). Would I need a different exhaust for that? Doppler probably would be too small right?

The doppler exhaust is a fine pipe, alternatively a puch simo could be cool too. Those are very high rpm hitters, where as the doppler is mid-high and is pretty much done at 11k. But realistically you should probably be maxing out at 10.5 and setting it up for torque. This is gonna be a 200 lb bike when it’s wet. I think I recommended am6 reeds since you were going to try to run the intake upwards, but I don’t remember. (edited)

Awesomeeeee, thanks for the followup on this! I'm hoping a bit less than 200lb fingers crossed (Joe's weighed 135lb, and we're adding about 10lb with heavier tubing, but taking off some with a front disc instead of that giant drum). Torque definitely sounds like a solid plan to me.

Any idea what lengthening the stinger would do?