A friend took the motor and front end off of this Streetmate and magically dropped the carcass off at my place. I don't know the year or if it's stollen or not so I'm not going to register it nor make an attempt. He did however give me an A35 bottom end with gears and all. I had a used Gila with an exhaust that was overdone and smeared. Case was welded up and bored. Lightened the gears and ditched the one way bearing. I tried using the bearing for starting twice and trashed it in about mile, TWICE. 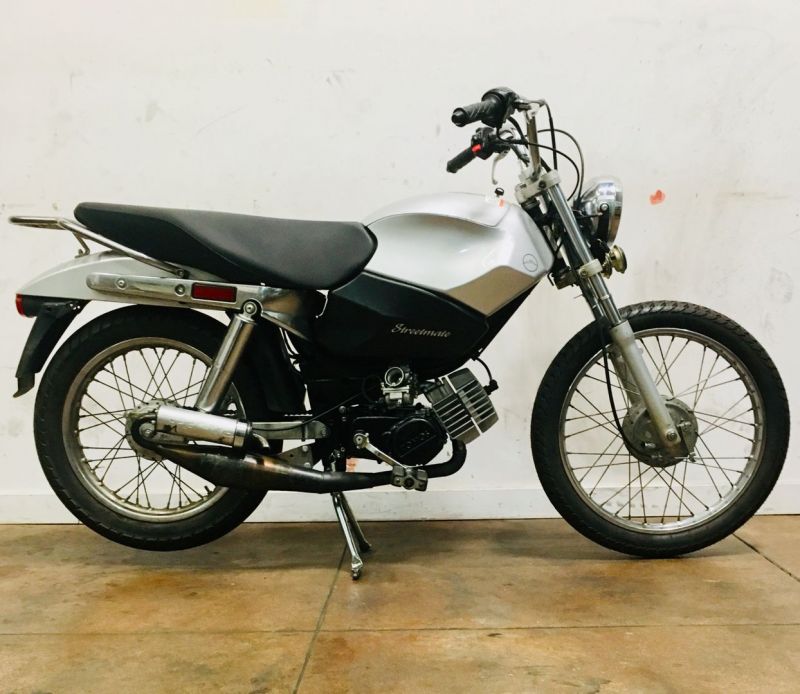 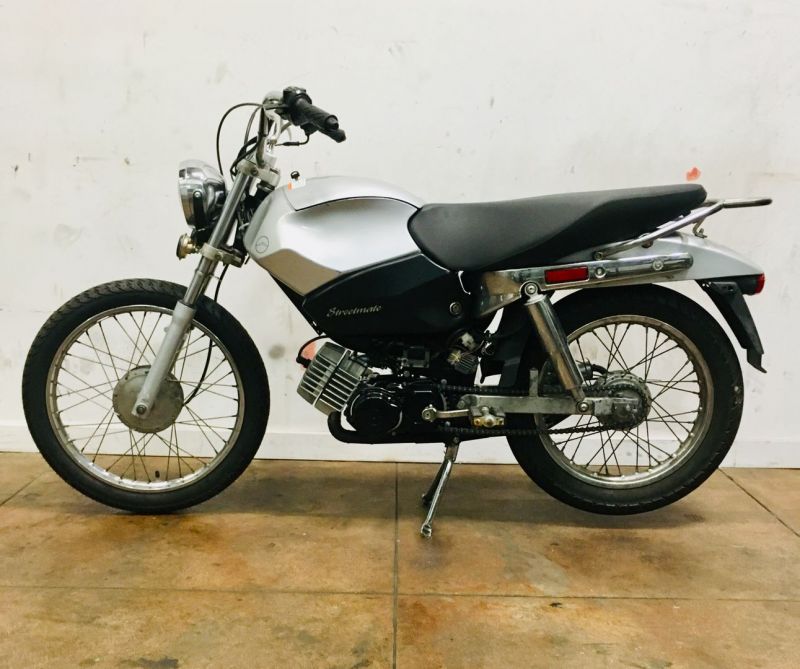 I moded the OG bell to except the outer ring of a KTM 50 bell and tacked it on. This KTM bell/ring is the same OD as the original Tomos bell but is wider. Mine hit the transmission cover a hair so the ridges were ground out. Also once 1st gear clutch was installed the cover still wouldn't close so more cutting of the carrier bearing saddle needed to be done. 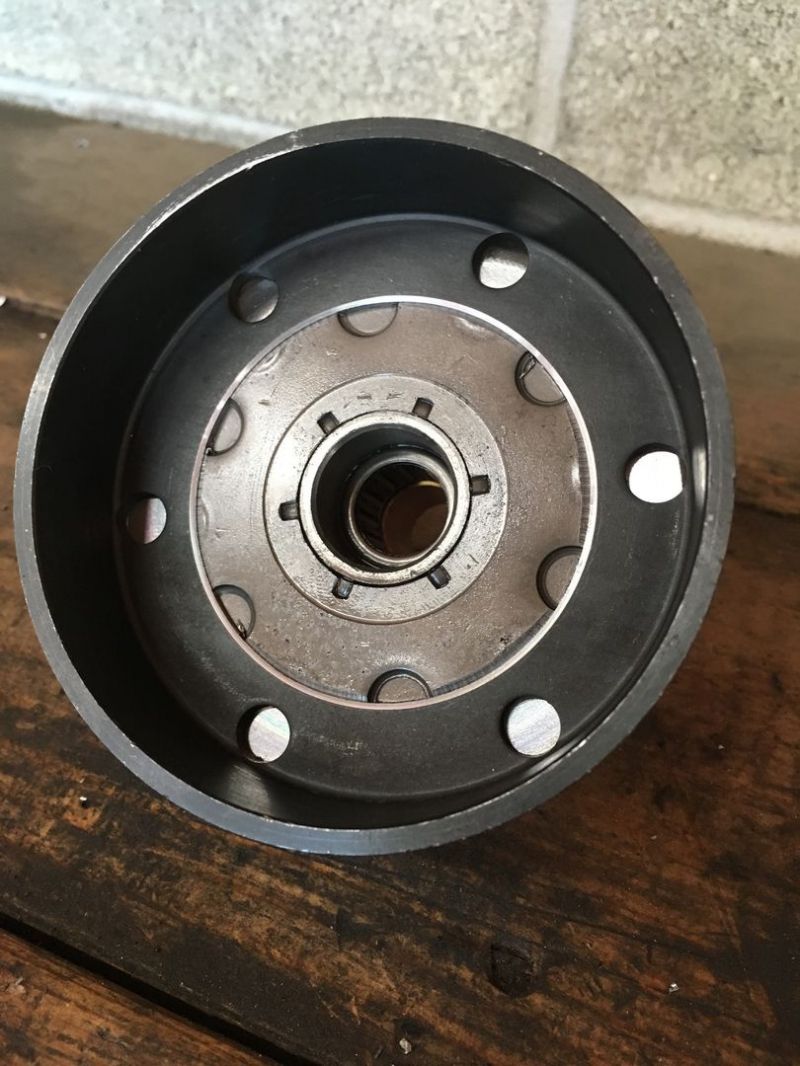 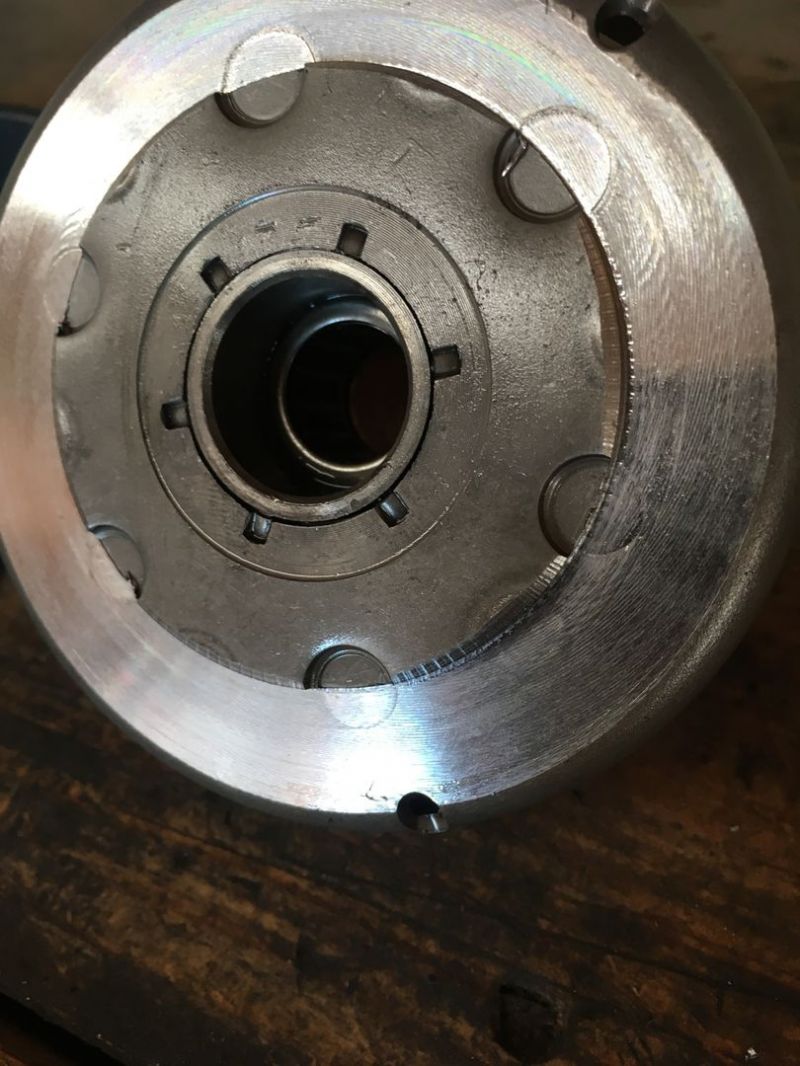 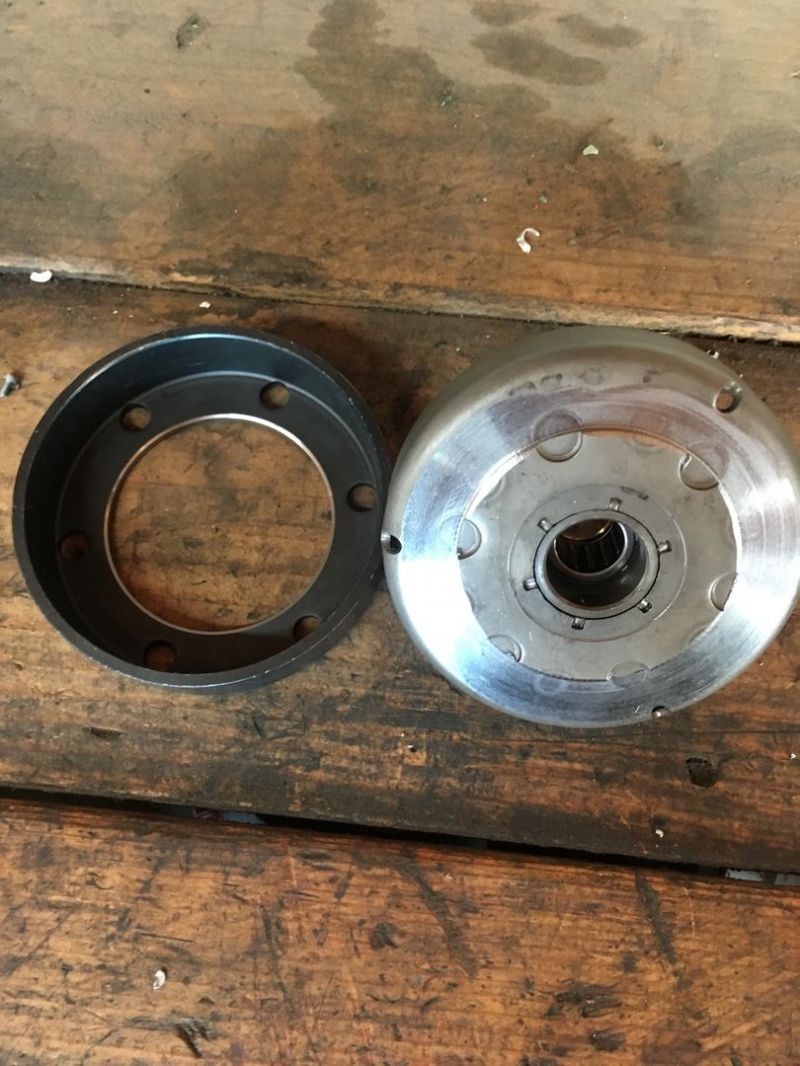 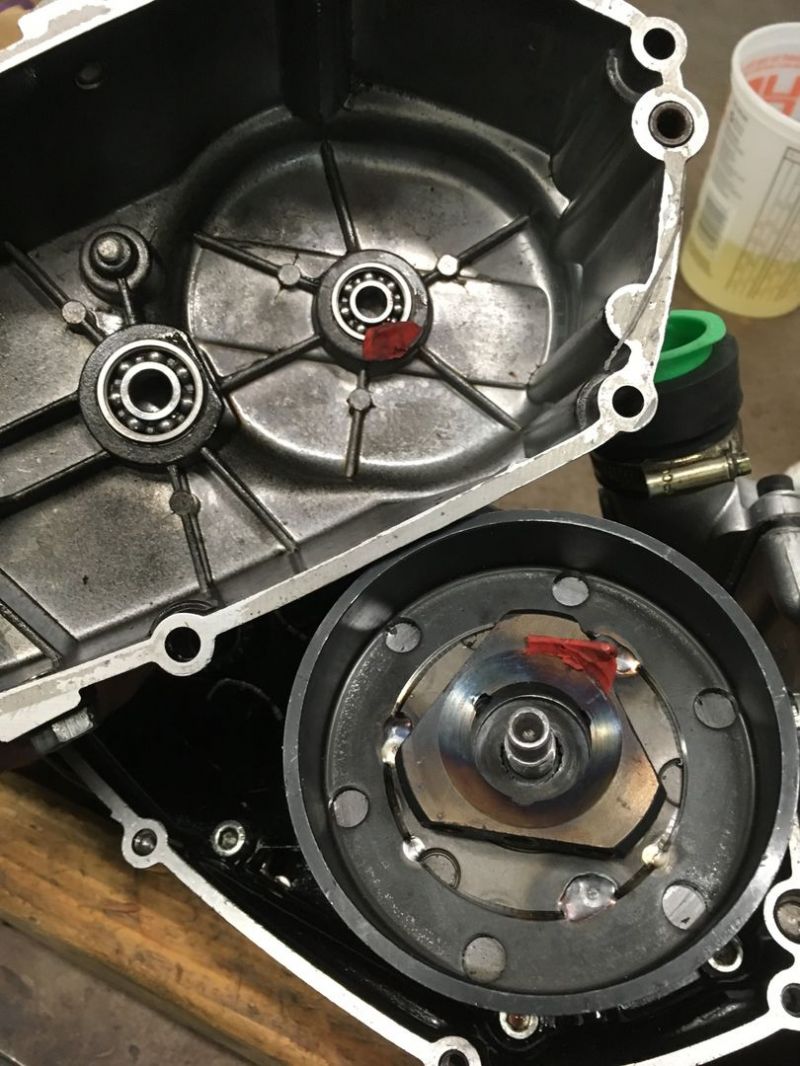 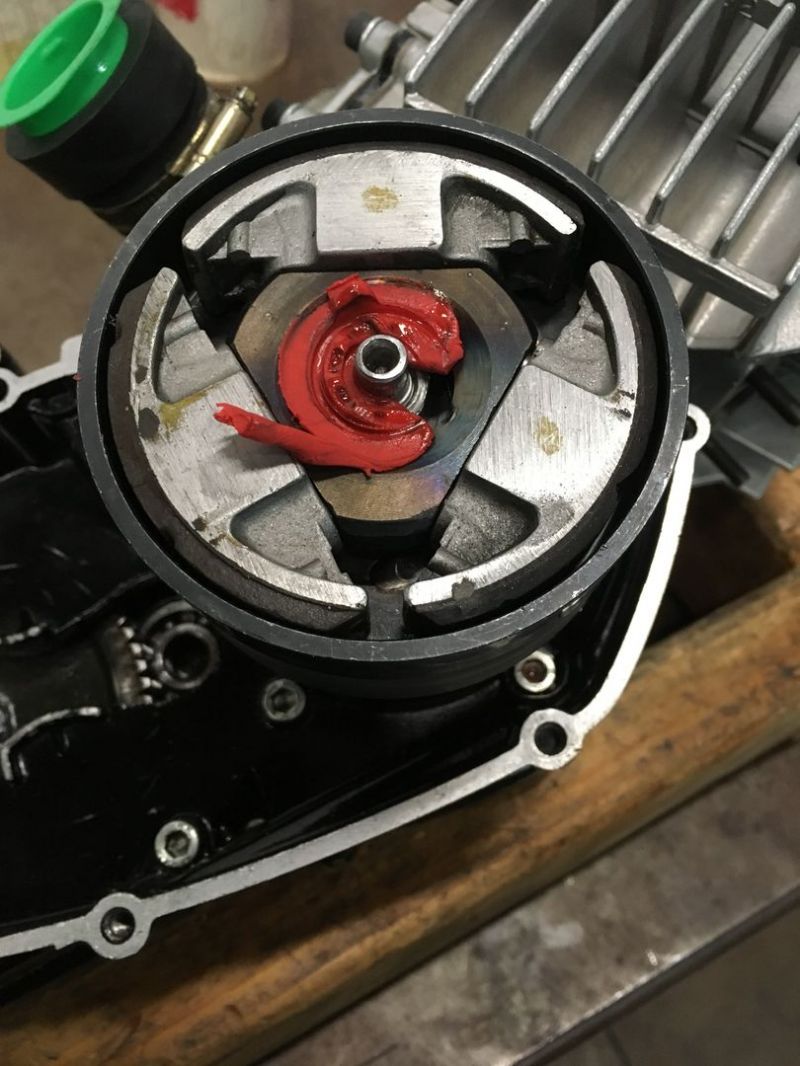 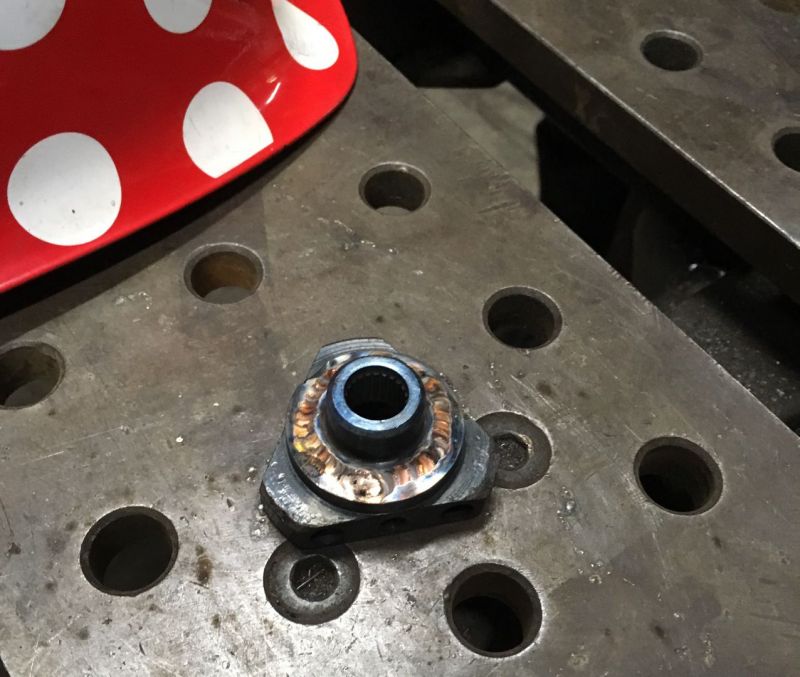 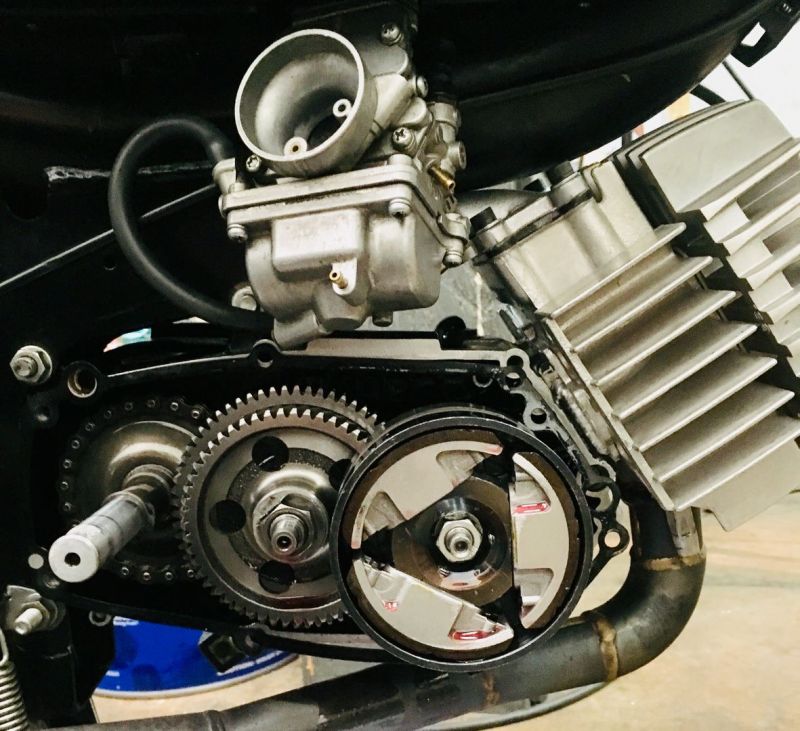 Second gear was a different story. I once rode a LEM 50 with this cheap ass two shoe that fucking rocked. It's basically an open Morini Franco clutch that cost like 10$ for a clone. The hubs come in cast aluminum and the diameter isn't enough for the stoke tomos bell. It needs to be bigger ant made from steel so it can be fused to the original hub. Normally the links are longer. Normally the pads are not tight on there and scoot around. Cheap chinese shit. The new hub is 2 mm bigger and wide enough to except the 415HD master links. 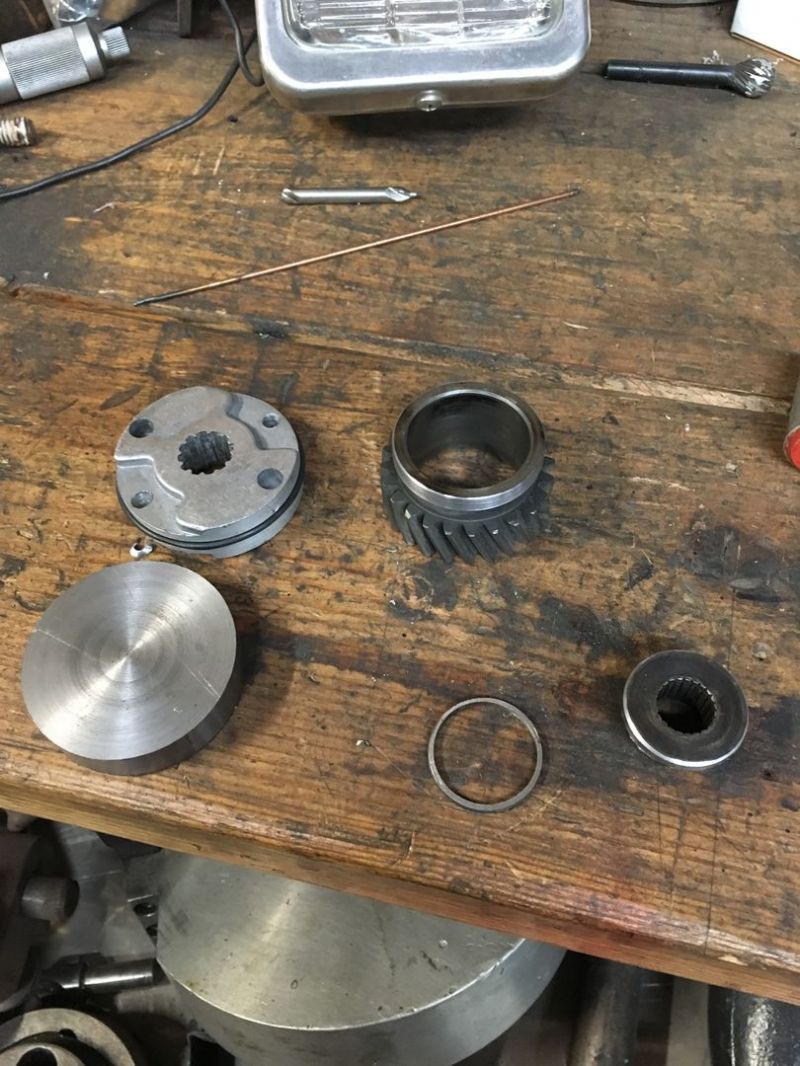 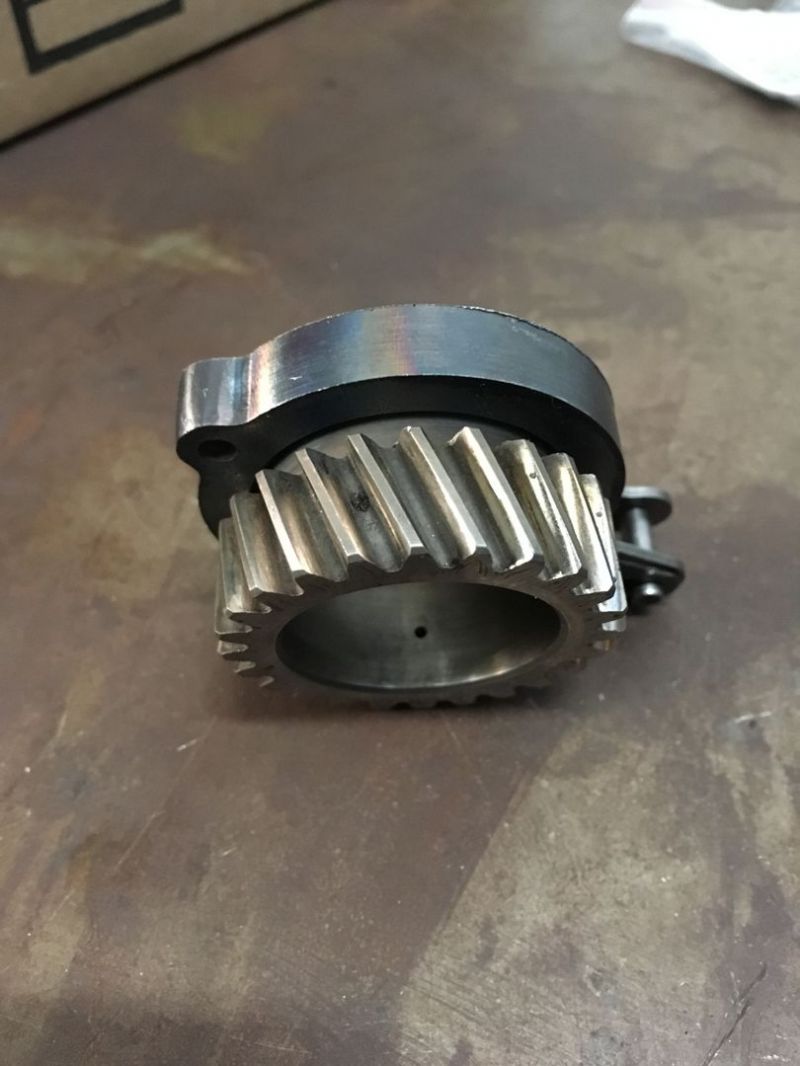 If you ever get to this step it is imperative that the original hub gets re-bored. It's essentially a bearing and if it doesn't spin smooth on the clutch bell it will fuse itself immediately and you'll have no 1st gear. It'll be stuck in second. Kinda feels like a PUCH. 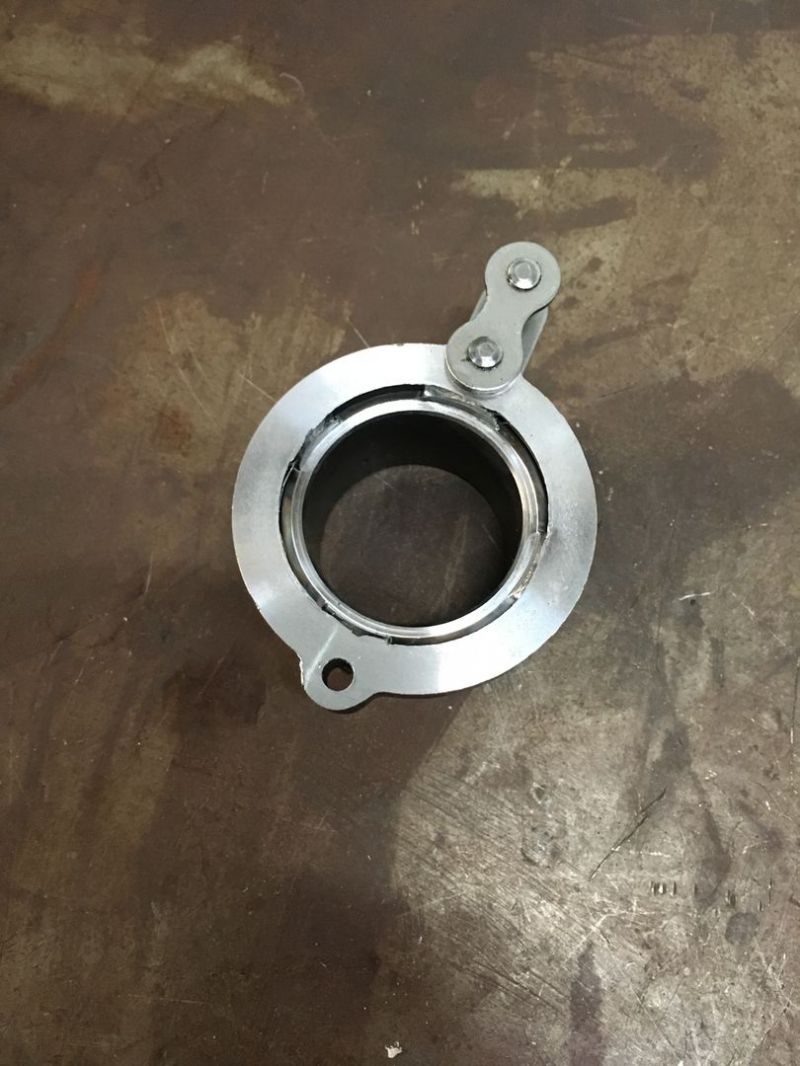 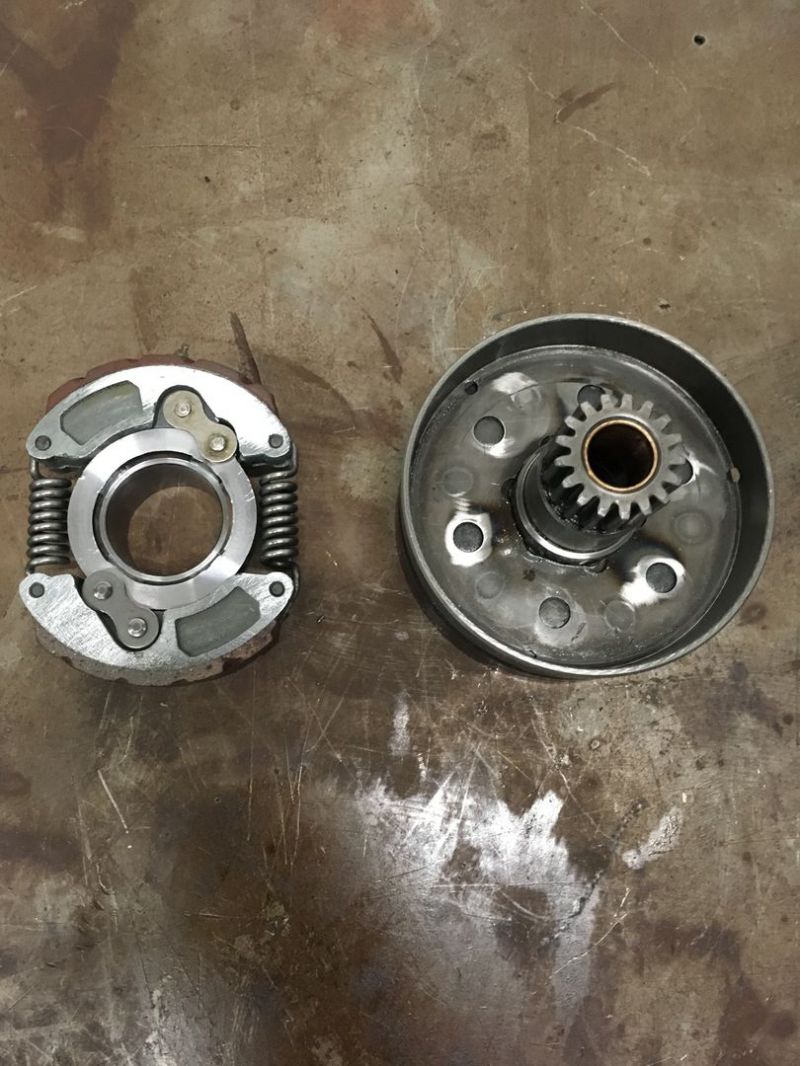 The good thing about these shoes is that they're the right width for the bell along with the links. 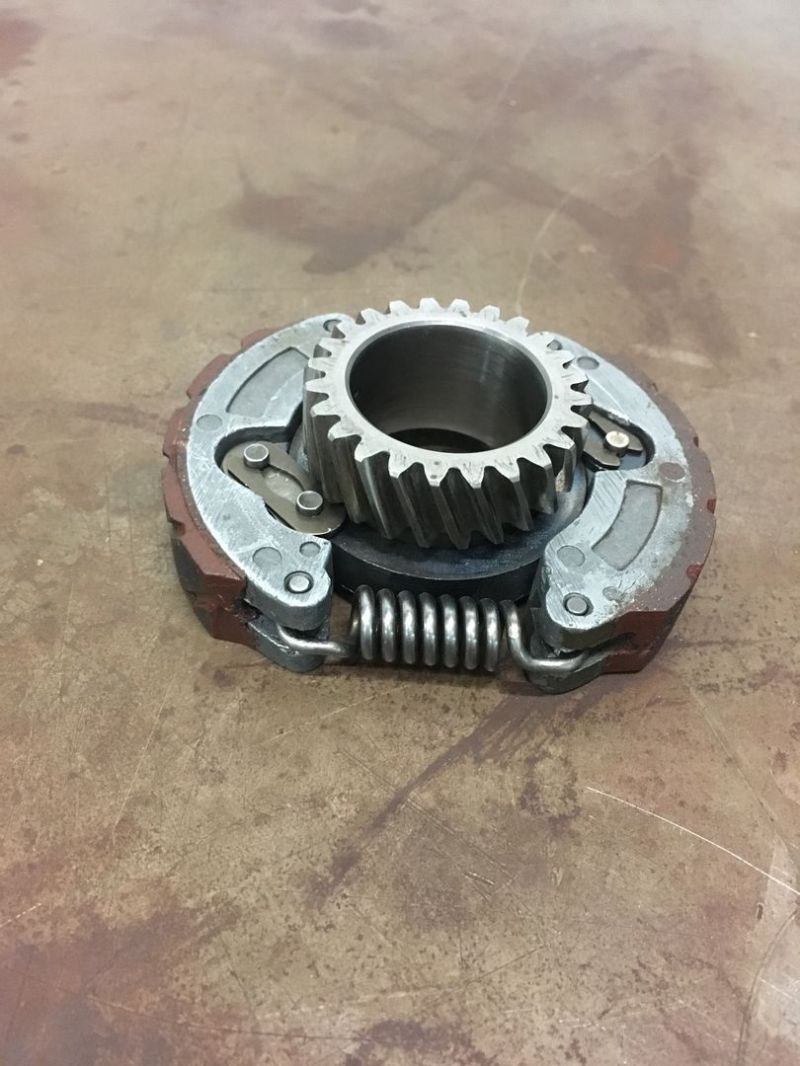 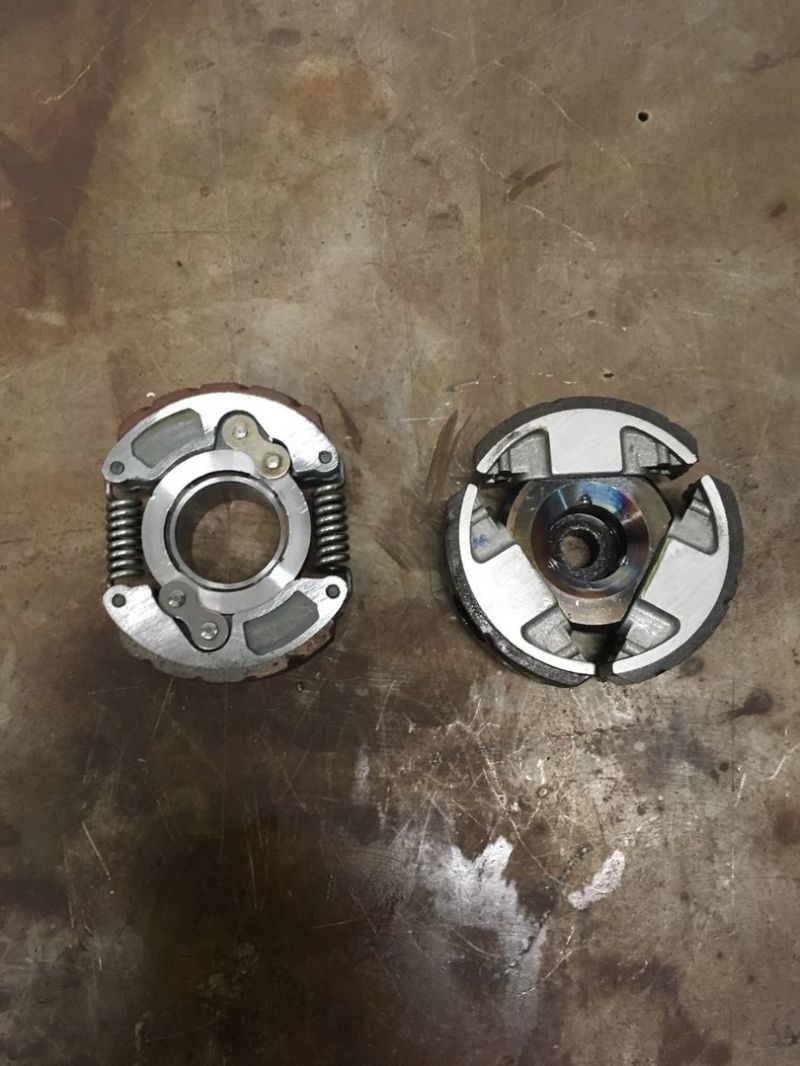 Didn't take a picture of the main gear. Also didn't go as far as I wanted but they're lighter. 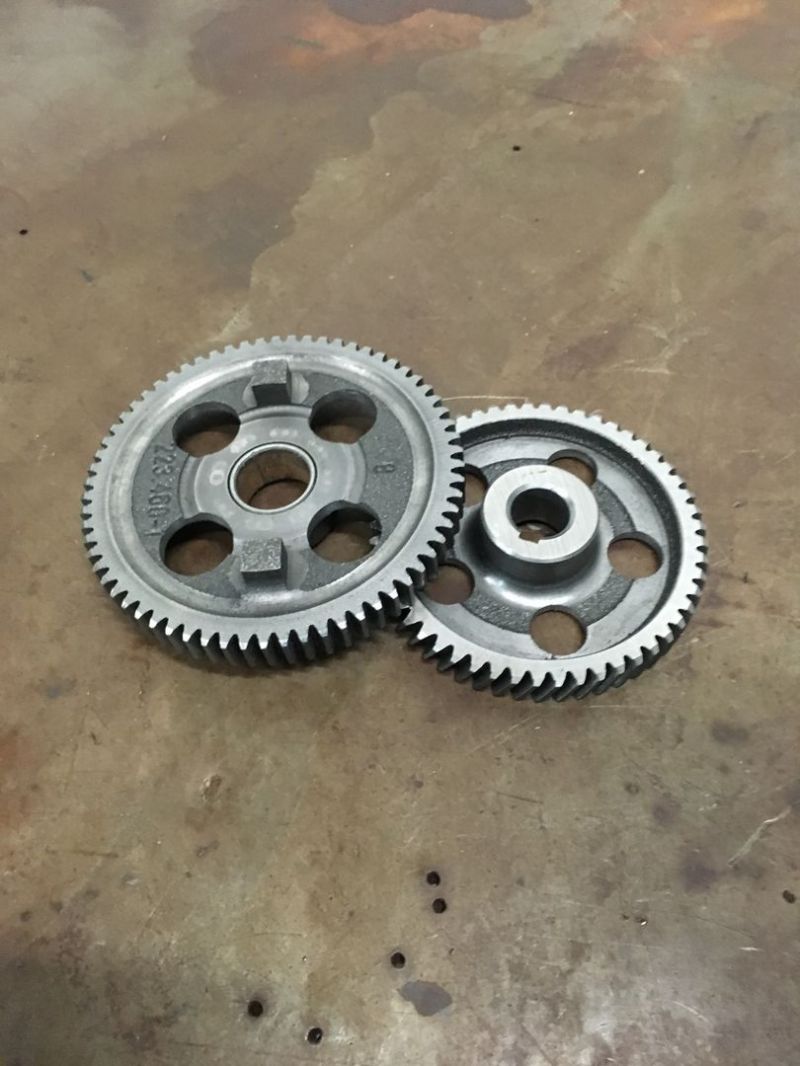 I think this may be something we have all spent countless hours researching. Also looking at Jake's TOBY build helps but lots of fabrication may not be for everyone? I wanted to ditch that one way bearing but finding a counterclockwise recoil starter that will pull through a high comp setup is a fucking bitch. No joke.

This cost about $50. It's from the Suzuki LT50 Quad. The recoil starter can be had on ebay all day long but you'll need a cup as well. I ordered my cup from back east somewhere. I took an NOS cover and my router and cut the center hump out of it leaving a 1mm lip. Basically cut the hump all the way out except a 1mm ring around the rosey. Then center the recoil starter and screw it on, bolt it on, rivet it on. I used Derbi points because that's what I have that goes counter clockwise at the moment. Built up some welds on the face of the flywheel and lathed them flat. Mounted the correct cup and the spacing was perfect. Shit looks like factory and I can pedal it. 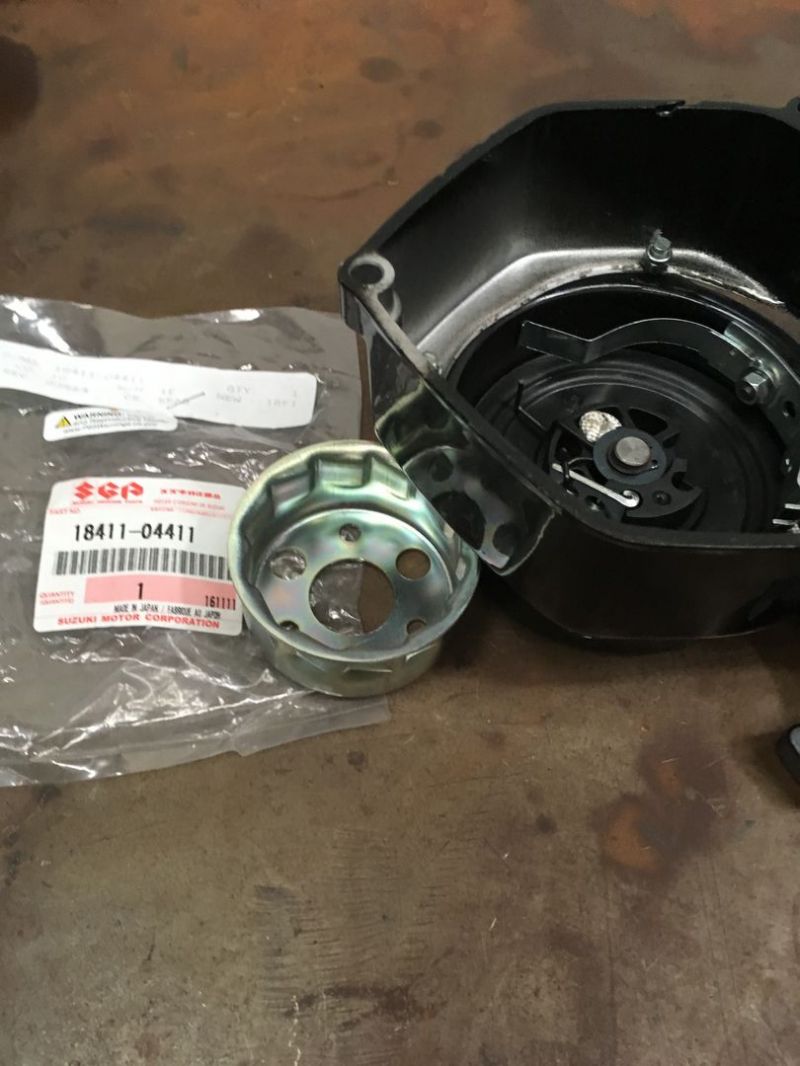 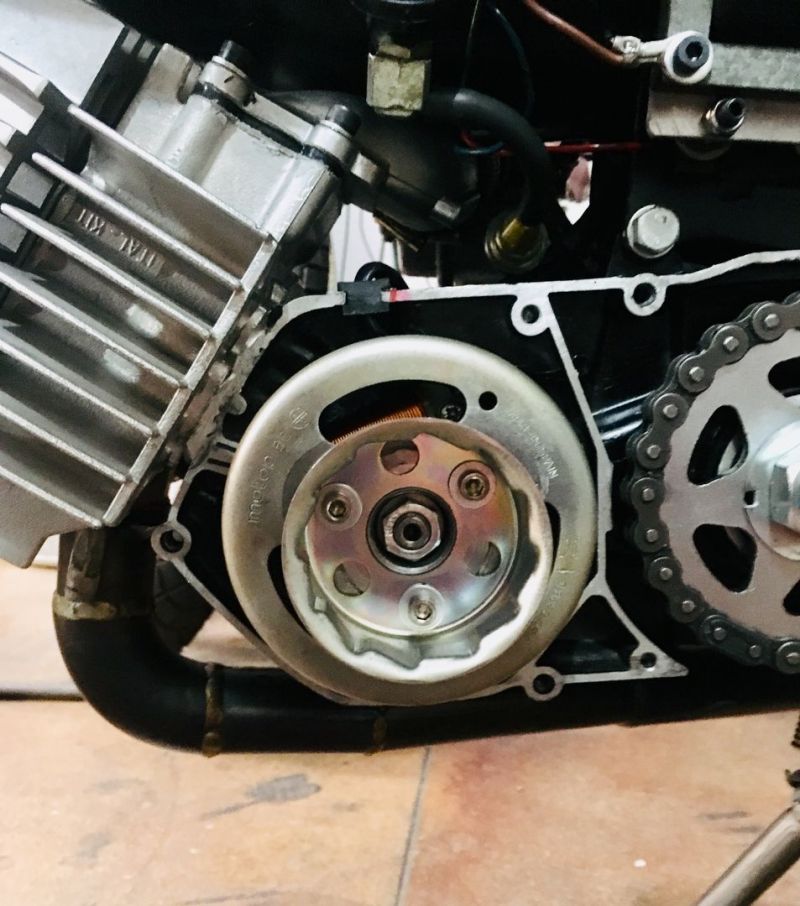 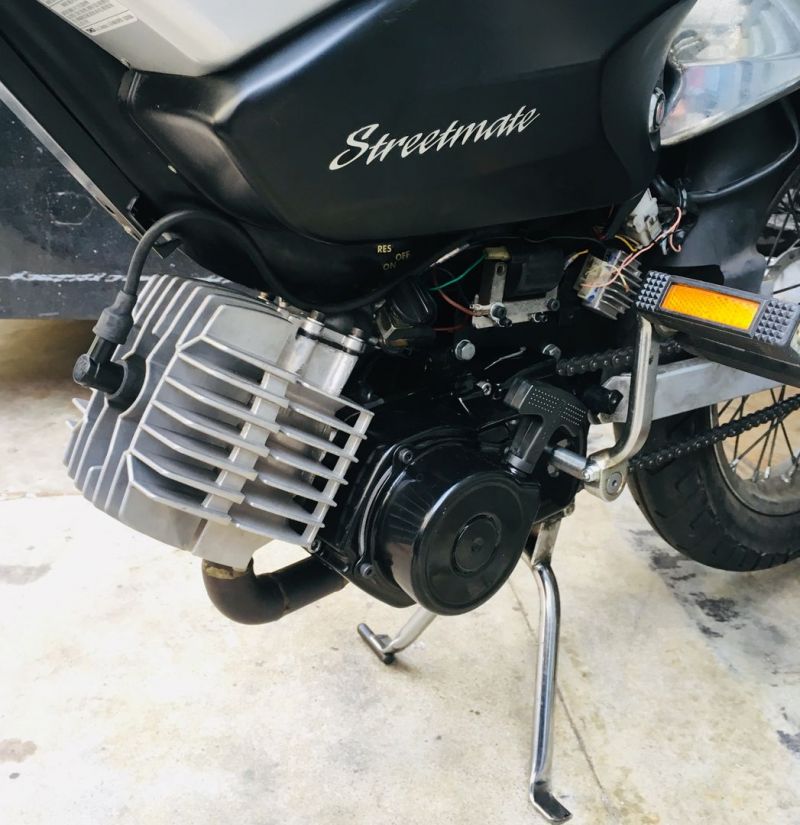 The Bike is quick. Off the line it took a built flatreed and two DR Hobbits. Working on my shift at the moment. God this things ugly.

All machining aside, I have to say that the pull start is a great add-on.

DANG every time I see this thread I am thinking of a NSU Quickly...

^haha that's why I clicked it first too!

I love those. definitely top 10 my most lusted after

> ^haha that's why I clicked it first too!

> I love those. definitely top 10 my most lusted after