Jedz Moto /
jedz123
This single post is part of a larger thread. Start from the top or view this post in context.

So Jedz here and I just got into a 77 Puch Maxi. I got the bike from a buddy of mine up in Burlington. It's a used and abused little smoker, motor is meh and I will be rebuilding with a 70cc Arsal kit and will be doing a total rebuild on the ped, rear bearings are trashed and all the consumable bits are pretty well toasted.

So the goal of the project is to build a ped I can commute on daily (45 miles round) and also do some light camping and adventure riding. I would also like to do +100 mile days so I will need the ped to go at least 40mph and also be safe so I decided to convert and swap the front end of the Puch out for something a tad more robust and "safe".

So I had a parts 81 Suzuki GS300 I had banging around and figured, well this tiny front end (barley acceptable for a motorcycle) should be very good for the 70cc Puch. So I went to work, fashioned some custom brackets, races and bearing and successfully installed this: 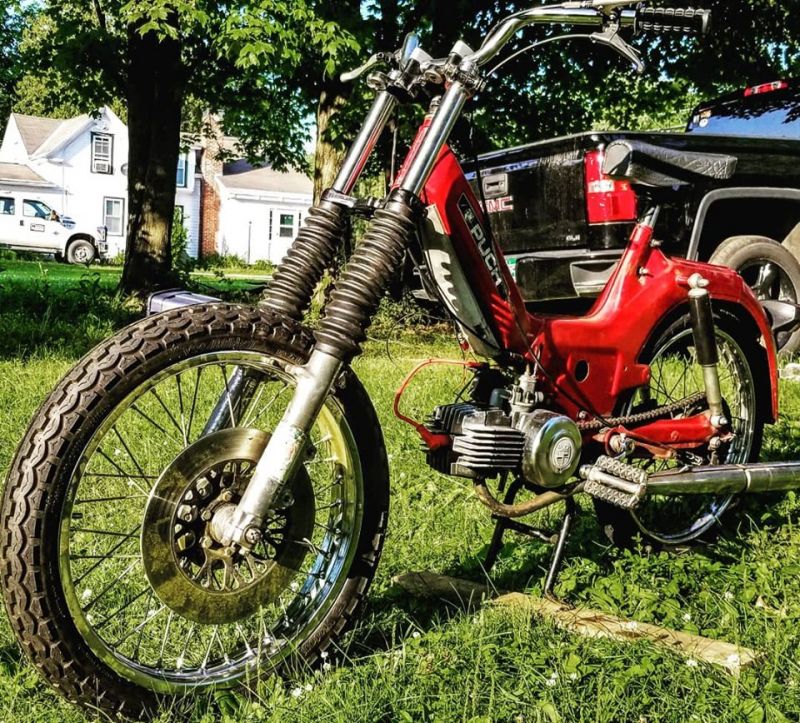 Not wanting to retain and drum front end I also used some spare parts I had from a Suzuki GS450 and converted the 18" stock wheel over to disc. Tire is far too wide compared to the rear (currently 3.5" X 18) So I will be converting the GS rim over to tubeless and I'll run a Michelin City Pro 2.75 X 18. That will help reduce some rolling resistance. My Tubeless conversion has been super effective on my 2015 Suzuki Tu250X and my 2018 Bonneville T120 (now with 36K miles on my tubeless conversion). Looking at the stoker rear of the Puch I will likely retain the tube for I'm willing to bet we will have some issues with converting the rear Puch rim to tubeless. I have 80/90X17 (3.1 inch converted) Michelin City pro tire coming in for the rear and the goal is to optimize rolling resistance plus I love Michelin tires...

So I ordered A HUGE order from Treatland.tv with Stuffy Crank, Bearings, control cables, gauges, rear suspension... The whole nine basically... I will be going through the Puch and will make sure the ped will not only be able to comfortably ride 40mph all day but to do it safely as well. I did my research and went with a reliable setup for the engine so it could be run all day (or through a whole tank) and not have issues. Knowing that I'll be camping and being under full load I also new the stock front end would not be up to the task (safely or effectively) so the robust front end was pretty critical.

So that's where she stands. I still need to fab up the GS450 front caliper, Rilled rotrs, stainless line and Nissin brake master for a GSX-R750. I'll keep you posted. You can follow my build (and other adventures) on my Instagram page: Jedz Moto Instagram I also have a youtube page where I post mostly Motorcycle stuff... Jedz Moto Youtube.

I put about 30K miles on my motorcycles a year but really wanted to get into the small stuff as wellfor small bikes a re the perfect form of transport around Vermont. I'll try keep my social media stuff as current as possible.

Thanks for tuning. Suggestions are always appreciated.