Noone mentioned why the Tesla turbine from page 1 would be a terrible idea yet.

The first reason is that it's air powered and is under no load in the video. Even with a propane tank converted to air you would be lucky if there was enough power to travel a 1/4 mile. Air power is slow and low powered. Even with an air horn compressor the Tesla motor would be almost worthless on a moped.

I think it works with fluids too. If you placed pancake coils between the plates like the bifolar pulse engine has it could generate power but the transmission of kinetic energy is the best property

> These are all horrible ideas

> > With the NGK app in Google's Play Store, Apple or Android, you can

> > strength and dwell, plug and coil health, and more right on your cell

> Possibly the troll of the year. BRAVO! Pay attention people, this is

This one really got me. I want my hour of googling back lol

If you replaced your magneto with a van dgraff generator what difference would there be? Your battery with laydenjars gear enough extra power after your ride to charge a 12v dc domiciles battery for 8 hours. Provided you could effiecienty downstep it from the 1000's of volts and up the amps. Tesla basically invented the generator and alternator it really hasn't changed in over 100 years. Cdi isn't anything revolutionary it just uses a magnetic flux field instead of points and a camlobe.

These inventions all fit together to make something incredible.

It just needs someone like bill gates to put it all the technologies in one unit and sell it.

I thought I knew add to the list sensory neurites here your heart has its own brain like cells close to 40,000 of them and they make networks just like your brain and that's why they say when people have heart transplants sometimes they take on the habits of the person who owns the heart previous.

And as far as that Tesla turbine just imagine if it was scaled up and at the bottom disc was made of the quartz crystal found in New York that you can mold and then on top of it put magnetic bearings and huge Granite discs that weigh tons and then when it runs the sheer weight would cause the courts to discharge electricity and with the spinning motion and kinetic energy you can create a searrle effect generator.

It would solve the world's energy needs or launch into space....

Or keep it simpler...

A greenhouse dome made of beerstone built at the base of a mountain. With a graphite nanotubes structure like a Chinese thumb locker chimneys one hot one cold one up one down about 1/2 a mile higher than the mt. Turning the tesla turbines that have fur and plastic disks generating static electricity using that to run 2x light cycles the heat goes up the cold in used to generate static the hot up the watering system pumps push water to a reservoir on top of the mountain. Kinetic energy using tesla one way valves to notify the load and slumberger chambers using the downward flow to generate hydro power. Burning the biomass. Too

Poor peep. Good pitch but who has a spare billion...?

So anyways with my approaching windfall. I think I am joining the local fab lab. First on my lists of things. Purpose built moped tools/jigs.

Phono or potters wheel with internal milling head in stepper tower so you can modify portmaps and overbore with hi accuracy. Little to no programming analog like a pantigraph. Ports on brass tracerplates. Analog pen pointer. Auto hone mode. Different milling heads ECT. Advice pointers? If it goes well I will sell them.

I used to be a cam operator.

I am going to cheat and buy the 3d cad input scanner and a cubio.

Ok how about a replacement a3 wrist pin shaped like a barbell so you can run a35 kits the bore would have to be 44 or 45 and beyond...m

So the stock 9 screws together and locks. Then you can use a 10. Cause the endswill lock behind the circlip.

Gas tank seal it inside. I figure I will coat it with fake granite epoxy spray...or find a hose....

Once the stuff coats it get a pipe run to bottom cut off makes a stopper that fits the casehalf. The remains use for the intake adapter it fits perfectly the carb snaps into the tube airtight. Its flexibility makes an airtightseal on the intake side too

Arugala and mopeds who knew...

As a side note if you biow the tranny seal it will pop out with considerable force...

Riding 11+ years. Keeping up with all three.

I have a human cat toy

.a 6lb weight on a light pull long spring on a swivel arm / drum. When struck it flys. Then right back at you. I have impaired depth perception and I have to train my brain spatial relations. I also do Tia chi with a short staff instead of a sword. Balance is artificial if I close my eyes I tend to sway. This is like my goto for rehab after being hit.

All the scrapping I did when I was a kid 14.

This is either My best idea or worst...

I am reinvesting my windfall into good people. I have made alternate income already I think I own 3 cars...

Loaned peeps I knew for 30 years money I didn't have a timeframe in payback w/o interest. Doulebacked my supply of commodities. All bills paid.

Why are there not oiler holes directing flow in wristpins. Strategic angled holes staggered as not to impede structural integrity. It would help cool and lessen restriction to downstroke ingress.

> Why are there not oiler holes directing flow in wristpins. Strategic

> angled holes staggered as not to impede structural integrity. It would 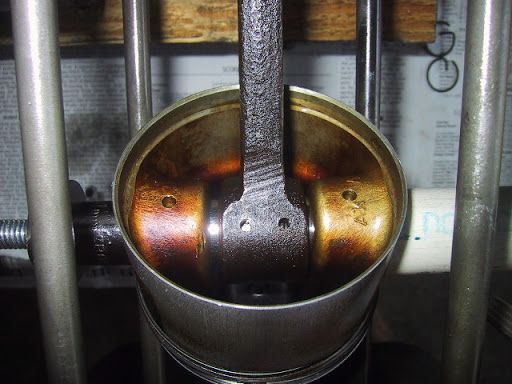 No the wrist itself.

> No the wrist itself.

I can't really imagine much , if any , benefit for 'holing' a wrist pin for lube purposes .

Both end's are pretty much closed and any holes might tend to make the pin weaker . Then there's the possibility of unwanted 'materials' getting to places it's definitely not wanted .

I was thinkingg directing flow patterns in the case transfers...

A party is always a good idea.

I put my money where my mouth is.

I have long term investments to finance this.

I can rent a park for the weekend. And have event insurance So I can serve beer.

KOA and lots of hotels.

I will mail out a bubblegum toy soccer ball to each branch for the drags. The ball is now in your court...

Want in mail it back. I was thinking winner take all or maybe a purse.

Well smoking a lot of pot gives you a weird trains of thought.but kinda gifts you with pattern recognition.

A MOPED religion or better yet cult. To be feared.b.s.

Cult of the flaming Coney.

Me . savior . name actually means Christmas in Spanish and end in Latin

Born in Bethlehem. Carpenter. 7th Son of a 7th son of a sailor. O- reformed computer hacker aledged co founder of cult of the dead cow. Rumored to have created bitcoin has 10 of the earliest bitcoin encoded with name address and phone # . lives off grid like hermit bl died 4 times . layed on hands

Persucuted by the gov. For said deed boogie all my life. Party till you don't wanna

The hood has this thing on weekends.

The Pentecostals revival. They set up amps and shout their words at everyone.

The Baptists too church of Islam.

A solution for real problems. Create products run a charity .re invest it all diversify the financial arm. Non demonational I don't care where you go on Sunday. My birthday is the feast of the assention and the fall of Constantinople.

Let the cheese beginith to slide...

Can I get a

The belief in nothingness.

Tax exemption. Set up financial empire. Loans to moped guys who are among the "healed" recovering from accidents .

Titainium bond of brothers. A knighthood bestowed on awakened ones. Survivors of infamous cage beasts. Repleat with ceremonial daggers arm bands with wheels on em.busts of the dreaded one with rodadendrons growing out his head as Mantlehead. Or Zen focus shrine