I recently swapped out my le partie for an hpi and could be having some issues with it. Installing it was pretty straightforward. I just had to take off a few mm of the adapter plate. The flywheel was initially rubbing the stator when tightened down so I broke out the sander, then lapped on granite, checked fitment then repeated till it spun freely.

I followed the instructions and set the piston to 2mm btdc and aligned the timing marks. It fired up right away and idles fine but is super sluggish till the pipe starts to hit.

Seems like it takes forever to build rpms and the engine stays super cool. The pipe isn't even getting that hot. Once it gets on the pipe it'll keep pulling.

I'm only ripping around the neighborhood at the moment so can't really open it up because of all the stop signs.

The bike was dialed in pretty good with the le partie. Jetting and transmission were close and this bike was like a rocket when the pipe would hit.

I'm running a bidalot rr kit and doppler pipe, 19mm phbg bd 94main, w6 2nd from top, 48 idle. Made massive power with the le partie. Really fast off the line.The only thing different is the hpi.

After reading about some peoples issues with the hpi timing marks not being marked correctly I put a timing light on it see if there's something going on with the hpi. I used a marker to mark the flywheel mark and the light is working fine 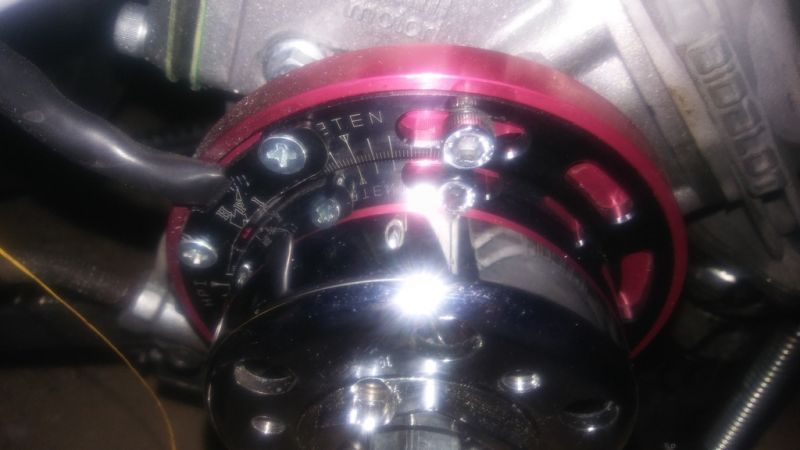 This pic is just an approximation of what I saw. The mark on the flywheel was definitely to the left of the stator mark. Maybe not as much as the picture shows though. I just moved the flywheel to the area where the light had it for the pic.

Is this normal? I had the light set to zero advance so the marks should be aligned, correct?

Trying to figure out what to do next. Should I go off of the marks the light is showing and re mark the stator where the flywheel mark is showing up then re-time it and go from there?

I previously used the light on the le partie and the two marks were pretty dead on.

Thanks for any assistance

Was the engine running in that picture? If you look at the timing curve, the ignition retards drastically at below idle rpm and trying to use a light with a drill spinning the crank will often give false results. (edited)

> You're doing it right. Go off of your timing light. If it's firing to

> the left of the mark on the stator, then you need to make a new mark on

> the stator and set your timing with that mark.

Thats what I figured. May be a bit confused because the timing isn't static

> Was the engine running in that picture? If you look at the timing curve,

> light with a drill spinning the crank will often give false results.

I had the engine running to check. Idle speed maybe 1600 rpms. I stopped drill starting when I had the Le Partie on there. I didn't wanna attempt drill press machining the flywheel to get more crank threads and the drill would back the nuts off. Annoying.

3800~ RPM it would seem on the graph. Looking at how difficult it would be to hit that mark I wouldn't even use a light unless I was trying to see total retard or running up through the range to observe.

> 3800~ RPM it would seem on the graph. Looking at how difficult it would

> see total retard or running up through the range to observe.

Ok. I think i got it. Seems at idle speed it should be showing up to the left and if I rev it up it should start moving back to the stator mark and then start retarding again around 5500-ish rpm.

I think I'll first check and make sure my piston is at 2mm btdc with the marks lined up and then maybe play around with the timing a bit. Maybe start advancing it slowly since the temps are so low. Thanks.

My stupid tto stopped working so I'm not able to monitor the temps.

Just going by feel(literally) until an angled thermocouple shows up for a different multi function gauge I have.

I bought the hpi because I'm starting work on an mbk51 project tomorrow and can use the le partie on the av10 I gotta build up. Moped rationalizing. Ha.

Depending on the engine 2mm it pretty low max timing. Also depending on your top end rpm you may be nearing TDC. I run about 2.6mm on a Hobbit which at max rpm takes it about 5deg retarded from stock timing. You will want to do the math on your specific setup to determine what you will be seeing. The HPI instructions are in no way meant for any one specific engine and will simply get it to start in most cases.

> Depending on the engine 2mm it pretty low max timing. Also depending on

> your top end rpm you may be nearing TDC. I run about 2.6mm on a Hobbit

> which at max rpm takes it about 5deg retarded from stock timing. You

> will be seeing. The HPI instructions are in no way meant for any one

> specific engine and will simply get it to start in most cases.

I Iooked at the curve again and the initial setting would definitely be pretty retarded at 10,000 + rpm, much more so than the 17° or 1.1mm I had the le partie timed at.

I checked the piston and it was still set at 2mm so i advanced it .15mm and instantly noticed an improvement. I advanced it .15 more and even better than before. So I took it to 2.4 and holy shit, this thing is amazing.

After riding for a few minutes the bike lost power and i killed it and pulled over.

I started trying to figure out what happened and I noticed the tension spring was gone. I found it about a hundred yards down the road.

I have a polini spring but i have it connected to a rod end on some angle mounted to the cases. The 2 m8 jam nuts and rod end locked together must've vibrated loose.

I reattached it using a nyloc and a regular nut and made sure the rod end was seated fully and locked to the other nuts. Lots of loctite too!

Because of this the spring is more compressed at rest than before and after taking it out again the acceleration is better still.

Thinnking maybe I could lose some weight on the er3 I took off the 2 small weights and took it out again and almost fell off the back of the bike when the pipe started to hit. Its kind of scary now. The pipe is coming on so quick now.

Before the bike was variating completely but must've been happening too soon to take full advantage of the power. The advance from the curve really wakes up the low end.

Keep an eye on your temps and rock on.

> Keep an eye on your temps and rock on.

The motor is definitely getting hot now. I dont think I will mess with the timing anymore until I can get the gauge I have set up with a proper thermocouple. It came with a flat one which causes the wire to be pressed against the fins.

Probably will wait to do any long runs till then too.

Gotta get started on the new bike this week so at least I will have something else to do.