I have a G3 with a MLM peoples pipe, 70cc airsal kit, and stock 505 D carb. It won’t go past 30 mph. Zeros Andy said he’s running a similar set up with different gearing and he’s hitting around 50 so I know the carb isn’t a problem, I verified that. There’s no leaks and it’s jetted correctly... what could be holding me back? I don’t expect it to be a 50+ mph bike but I think it should be hitting about 40. Any help is appreciated. Once again other than carb. Worst case I have a VM20 and MLM intake I’ll have to hack up to get it to work but I don’t feel like doing that and it’s been confirmed it should rip with the stock 505/1D carb

also the intake that comes with the airsal kits is epic heaving shit. I have no idea why but it's significantly shittier than stock. like smaller diameter and the port doesn't line up with the cylinder, it's retarded. but that's not gonna make it go 30. I'm gonna guess 1 of those 3.

Also 2, the airsal kit NEEDS a long reach plug, using a B7HS will definitely cut your power by a shitload. ES only.

and 3rd, the decomp: stock ones leak a lot if you reused the old one, it's best to plug it entirely with m10x1.5 and make SURE the bottom of the bolt is bottomed out in the hole, not bottomed out at the cap which could leave the hole open. 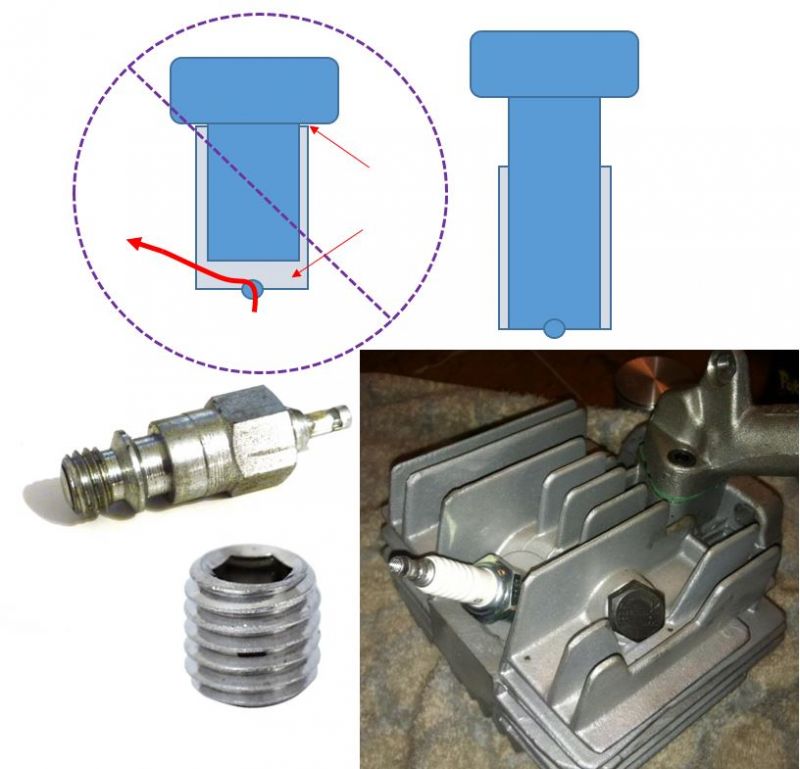 Head leaks could be issue here too.

There’s no leaks, I have a b7es in there now, I’ve tried the b8es too, it’s plugged well, and there’s no leaks. Can’t get it to die or even slow down with carb cleaner and we checked timing and it’s pretty spot on... it’s the weirdest thing and no one down here can figure out why this thing won’t go past 30

Does your Engine have the 4.88 Gearing or the 4.05 Gearing? because i would say that is a realistic speed for a Bike with the internal 4.88s.

Not realy, the 4.88 Gears are kinda short, at least with the Gearing i have in mind, stock in Germany was 11:52 with 17" Wheels, and for those 30mph or little under 50kmh is normal with a similar setup.

Well it’s a 30 mph version stock.... a kit and pipe wouldn’t even give me 1 mph more? That doesn’t seem right

Be a little bit off in the jetting and your bike will be a dog! have complete jetting perfect with perfect air fuel mixture and you could rip

And that’s all I’m asking for but something holding me back and I can’t figure out what it is... id be happy with mid 30s

Old points, external coil, wire and cap? Timing, jetting and gearing. high flow air filter and a good pipe with no gasket leaks. I get 35 mph on a stock Sachs.

What is your gearing at?

Have you tried running it without the airbox?

> it shouldn’t be restricting it

Did you double check the choke plate on the airbox isn't stuck closed? Just a thought.

the Air box IS a restriction.

upjet, if u got the cool throttle choke blip that a few times to load up the mix n hang on.

not to say your an amateur, but get a head temp gauge so you dont burn up your new ride and check everything 3 times. i got a zippy kkm mopet w sachs, totally stock, clamp on jammy, deleted decomp, panty hose filter, slow version A that does 33 - 35.

The jetting is perfectly fine, I’ve checked that a few times just to make sure, went up and down and it didn’t help

> The jetting is perfectly fine, I’ve checked that a few times just to

> make sure, went up and down and it didn’t help

Does it sound like it's reving pretty good or not?

Yea it sounds amazing and runs great. It 4 strokes when it’s pegged but I just checked for air leaks again and it didn’t look like there were any at all. I’m stumped

Hold up back it up

Are you sure you have a "D" crank in your bottom end?

> Yea it sounds amazing and runs great. It 4 strokes when it’s pegged but

Haven’t checked that yet, I’ll do that next

Try experimenting with your gear ratio.

Cruises mid 40s And I’m still fucking with the carb.

Depending on what you call a little could be your problem

i'd go right to the VM20 if i were you. those square bings- in my experience- get real wacky once you're outside the normal operating conditions. they work pretty good stock but when you ditch the air filter or do major performance stuff they are hard to tune not having a needle and all that jazz.

Hey dude. Try a different intake and ditch the air box, make something else work there.

Sorry the carb didn’t solve it!

> Hey dude. Try a different intake and ditch the air box, make something

> Sorry the carb didn’t solve it!

Yea I think I’ll just do the VM20 now, and it’s the right carb but for some reason it’s different than the one Andy has even though it has the same numbers

Sometimes they were intentionally restricted by running ludicrous advanced timing, like 30 deg BTDC. Also sachs are fairly notorious for shearing the woodruff keys and slipping timing. I blame how fun it is to rip coaster brakes and the not-instant reaction from the clutch to disengage maybe

my 2-speed D balboa last spring got progressively slower and slower on top speed, had the cheap puch CDI, turned out the timing pickup or something was shitty and it basically just turned off higher rpms. People complain about that happening with those CDIs on puch too. If stock ignition, shitty points, tiny gap or shitty condenser or even a bad lobe on the inside of the flywheel might make it break up at higher speeds.

3) 4 strokey sound at top speeds can also happen if decomps be leaky or small compression leaks. I don't actually know why but I had a leaky decomp that sounded dead ass exactly like 4 stroking, and only appeared at high speed. Stock D w slip-on pipe, bike ran fine up to like 30 then sputter wall sounded just like it was 4 stroking, played all around with jetting and happened same even when the jetting was definitely lean. Then I pulled out the decomp and plugged it, rejetted and she was mid-high 30's

I got another brand moped and it normally went about 20mph, so I kitted it to 60cc and it was able to go 26 mph. Also some people say my spark plug gap should be .35