dude that"s awesome you got the clutch to not back off. with a rear regear you should be doing pretty well.

> dude that"s awesome you got the clutch to not back

> off. with a rear regear you should be doing

HEY NOW, i only have ~10 miles on this assembly so far. I will find some wood to knock upon.

Regear down (im at 13/32)? to hell with that, gotta go fast. I'ma tinker with the jetting some more since i've only really changed jets once so far and i'm pretty damn sure it's not right since it's so hot. I will keep y'all posted for sure.(edited)

hole' hell on that gear combo i bet it takes a long time to get to speed. i would drop the front down 1 tooth and just change the rear so you will gain some torque

I've racked up about 30 miles so far and i am NOT taking it easy. Well, i am when shifting (sometimes i go ham here) and when starting from a stop kinda, but other than that it's pretty much WOT all the time cause it's a moped and i don't have time to be a little bitch. I initially jetted based on a friends 74cc Puch Gila tune with the same carb but I think the main jet is still too lean @ 140 currently. I am gradually approaching the stock tm24 jetting @160. Temps are much better and peaked around 375 -385 now. I forgot to reset the trail tech. More work to come.

Clutch is stronger than the smell of 1000 babies diapers so far. Other things not so much, but they will get better as they fail and i make them better.

My rear sprocket lost a bolt and the other 3 were 80% out by the time i got to my destination/ noticed. I put the wheel together in like january and didn't threadlock it if i recall and haven't really toched it since.

It's funny cause it looked at the bolts right before i left (like just looked at them, didn't try to tighten them or anything) and was like "meh" and began my journey.

My axle tensioners are tripple nutted cause they kept coming off. The theme of this build 2 nuts on everything it seems haha!

> hole' hell on that gear combo i bet it takes a

> long time to get to speed. i would drop the front

> down 1 tooth and just change the rear so you will

to hell with that. I promise you it is rather quick for being such a tall gear ratio. It REEALLY screams when it gets up on the the pipe in first gear. The carb is massive for one of these motors. I don't think i've ever seen such an insanely equipped Sachs.

My biggest problem is not letting the clutch slip enough to have the bike move from a stop lol. I'm pretty much a scrub when it comes to clutched bikes, and the tall gearing is rather unforgiving.

That and it tends to miss going into second gear via spring tension. I think i will use WillD's extra spring method. That should help a good bit. Also, i (or someone else) might have dropped my crank and knocked it out of true; the perks of sharing a workspace with others. The bike vibrates a LOT in 1st when it gets up in the revs and it kinda spooks me from really revving it out.

I'll probably drop the motor and look at it at some point since the right side pedal o-ring is also leaking transmission fluid even though i replaced it with OEM parts. Though i don't think i saw a puddle yesterday when i took it out so maybe not.

do you still use the original gear selector? maybe im forgetting and just need to read back. the little toothed bit that the gear shift lever locks into, if you space out the grooves in there so it's got more room to pull and/or release that's the other big piece to getting away from the thing where it drops outta second.

I always lose oil on the pedal shaft seal, I think the chain hits it sometimes. funny I also had problems with the rear sprocket bolts.

fast sachs is rad. im very excited about this

Foot selector my dude. I wasn't gonna spend whatever money and time finding a grip shift.

It doesn't really drop out of second unless i'm not paying attention and press the lever down. The dogs just don't pop into the slots quickly without additional pressure at high rpm.

I'll get some good pictures of everything soon when i get er done.(edited)

Mine also leaks oil on the pedal shaft but on the righthand side. I've replaced the same seal and rubber ring three times and it just doesn't care. On mine I just give it a bit and it'll stop leaking without the overall oil level being too low.

> Mine also leaks oil on the pedal shaft but on the

> righthand side. I've replaced the same seal and

> On mine I just give it a bit and it'll stop

> leaking without the overall oil level being too

Mine is leaking on the right side as well. I also just let it cry a bit till it stops and when i've later drained everything there's still plenty of fluid so i haven't been worried.

> whatever money and time finding a grip shift.

mine leaks on the right side as well. i also had the vibration you were explaining and i took it apart and put a spare set of trans gears out of another motor and it cured it. before that i would have numb hands and feet after 5 mins of driving. i would check all the gears and make sure they are really clean and all the moving parts are free. mine ended up being the worm gear thing wasn't moving freely and only half engaging cause it had allot of crud all up in it hope this helps a little

> whatever money and time finding a grip shift.

> It doesn't really drop out of second unless i'm

> not paying attention and press the lever down. The

> dogs just don't pop into the slots quickly without

> I'll get some good pictures of everything soon

been reading up on all this sachs shit for a while now because I've got myself into a 2 speed project, and i don't really know how i want to build it up exactly yet, but I know I don't want to worry about clutch issues if I can help it.

So, after reading the 5 or 6 year old thread about the tripco clutches that nick had made up I decided to reach out to them to see if they can make more. Seems like they can. I have no idea on quote yet, but shouldn't be an issue for them to make friction discs with a waffle grooved kevlar friction material. .635mm is the thinnest they can do the friction material, so to keep a 4/3 setup stack at around 17mm overall length, plates for the friction discs would be 2.13mm thick. I'm going to get some if the quote is reasonable. anyone else interested? Asked about group buy/bulk discount quantity but haven't heard anything back yet. PM if interested i guess.

I still think the L2S pads are more than enough. They are cheaper, good material, and have far more contact area than the ones you are talking about iirc.

So here's where this build stands so far:

It is a huge pain in the dick to get moving once it's hot; especially from a stop on an uphill. I have a hard time using the friction zone on the clutch, it is very very narrow. I am getting better with it, but it has a bit of a steep learning curve compared to other stuff. I've mentioned this before but w/e.

Vibration is still really crazy, but seemed better yesterday. I will almost definitely need to open it up at some point and make sure all is good. It only really seems to vibrate a fuck ton in 1st gear.

But the clutch though, that shit is holding up really well. Doesn't seem to be slipping or losing any of it's functionality so far and i'm really beating on it (shifting up and down like a dumbshit, hard clutching, etc) . I am revving it out very far in 1st and no slipping. Low RPM WOT in 2 for days and it holds.

Considering a rear re-gear because it might actually make it faster. I never really have enough room to rev out in 2 and just about any amount of hill makes 2 useless in 13/32. Might port it. Still working out the few kinks and shit falling off all the time. 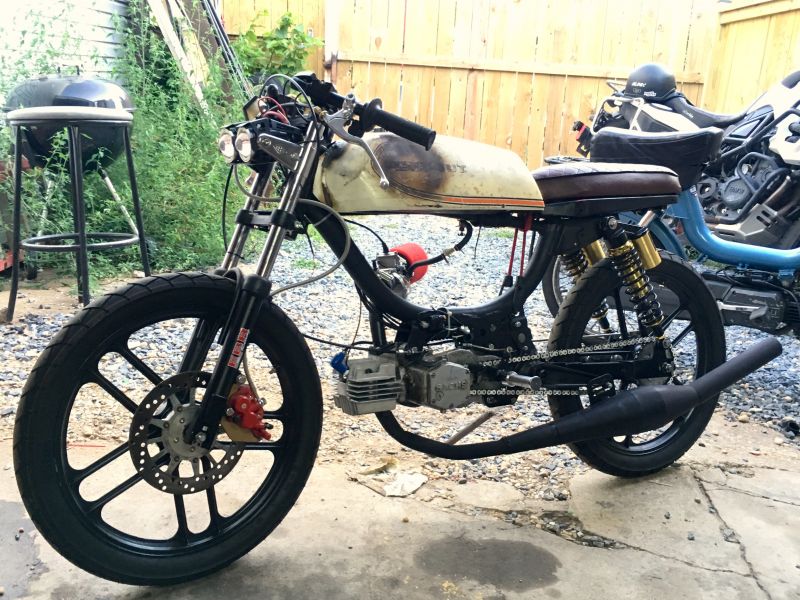 Also this guy vibrated it's way out and off on my way home from the bar. I was wondering why this shock looked weird lately. This explains that. Still impressed it made it's way out. Good times with a taint-numbing Sachs 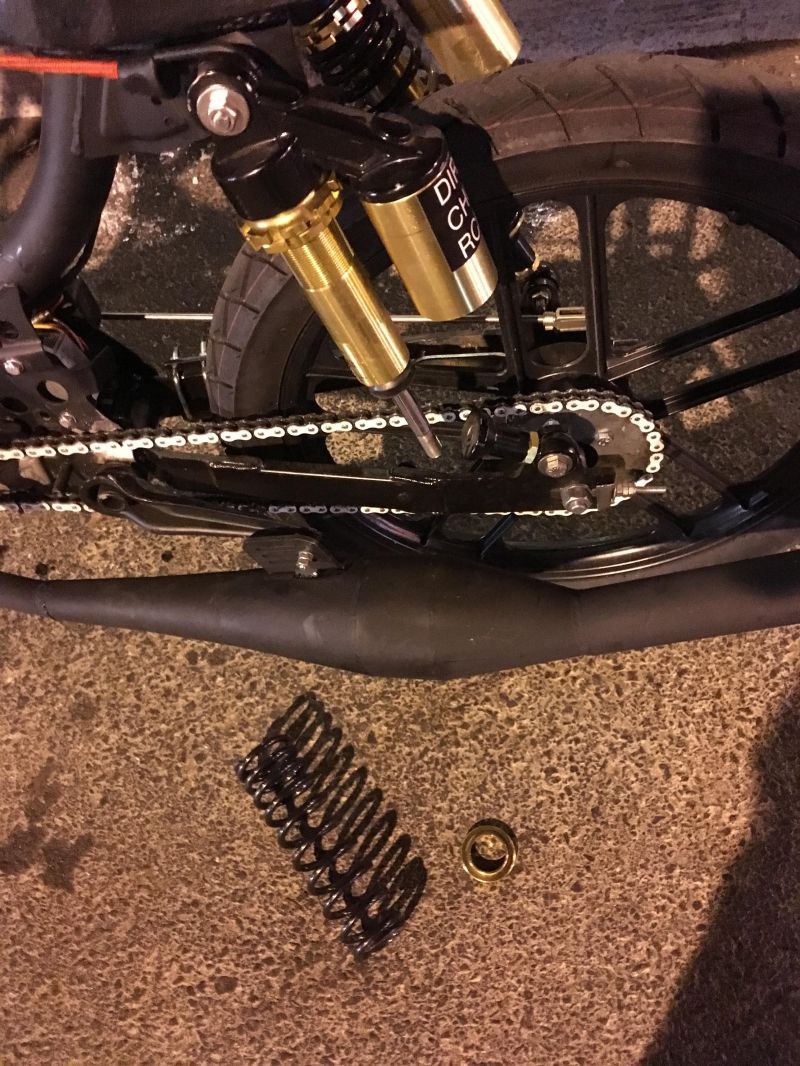 Graham I think used to sell hard mounts cuz the damper bushings on the sachs make the vibrating worse. I eventually came to kind of enjoy that tinny metallic feeling of clinking your numb finger tips together after 30m on a sachs. That bikes great

> sachs make the vibrating worse. I eventually came to kind of enjoy that

> tinny metallic feeling of clinking your numb finger tips together after

I made an aluminum mount bushing for the front. Just a piece of aluminum tubing (7/8"? maybe i don't remember) with an m8 ID steel tube pressed into it and some oversize washers on each end. I think i did that cause it was moving a lot under pedal load but i have since taken the pedals off. Come to think of it, i tend to hard mount the front of all my motors.

My feet turn to jelly when ripping in 1st gear.

so i got stuck in stop and go traffic and shattered the clutch so i have a standard clutching there for not its working fine. glad to see yours is holding up

> have a standard clutching there for not its working fine. glad to see

> yours is holding up

I like to think of it as working out the kinks

You guys do know what the word 'tight' means , right ? LOL

Good . It's gotta be right tight to keep yer butt from catching that road rash .

lol my rear sprocket has almost fallen off also.

Something moved me and I pulled this stupid bike out of the corner and regeared it to 11/32 and now it's not ass to ride. I guess i'll finish this project now.

the clutch is still working(edited)

It vibrates so much. Way too much. Gotta take it apart :/

Also, gotta put the flywheel cover on before I ruin my boots lol

You should make your pipe have a slip mounted flange. Its a must on all of my race mopeds.

> You should make your pipe have a slip mounted flange. Its a must on all

> of my race mopeds.

> > You should make your pipe have a slip mounted flange. Its a must on

I already rewelded it. My skills have greatly improved in the last 2 years. Previously, it was 50/50 weld and braze. I doubt it will break again but if it does, I'll Fab a slip mount cause that's cool af.