How wide, relative to bore, can you make a port, and still run the ring gap over it without snagging?

Any rule of thumb, or anyone with good/bad experience?

I want more port time area, cutting two small ports between the secondaries and the boost port is an option, but that would not give as much area as just widening the existing ports.

Moving ring pin to run in the middle of the boost port is an option, or get a piston with the pin located in the right place.

Depends on everything, good luck.

yeah, its really hard to get the pin out to move it, but you can take a dremel and just grind the pin down, then drill and insert another pin. I used a small roll pin to replace it and set it in place with loctite. I fucked up the first one not being careful and just whacking it in there with a hand drill. the second one i took about 4 steps, starting from a tiny jet drill and working my way up just short of the pin nominal size. I think it was a 1/16 pin, but you should probably measure whatever you have in there already. I think i used the letter, or maybe wire gauge drill that was about .002 under the nominal size. It took some doing with a tiny drift punch to smash that thing in there, doesn't have a ton of time on it, but i'm pretty confident that it has enough to say its safe. 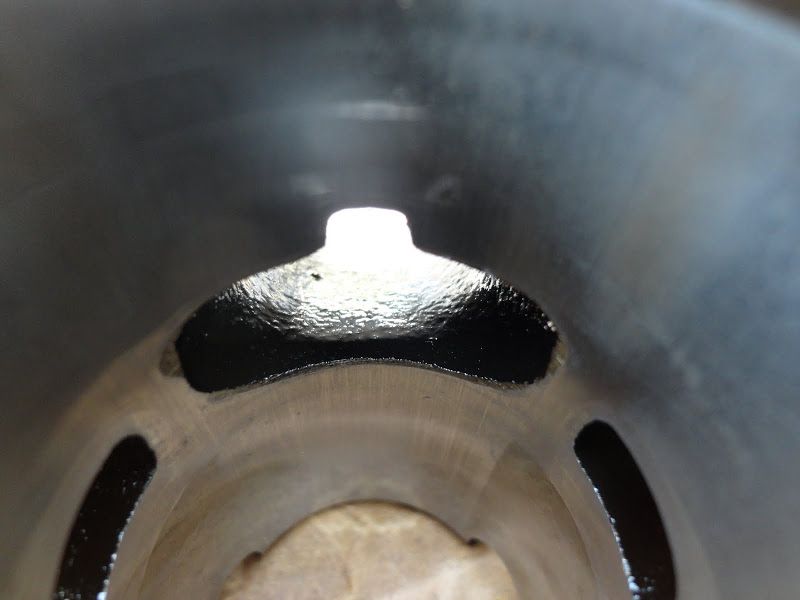 there were a couple 'tricks' in the port i could see, first of all a huge chamfer at the top and bottom, it had what i call a 'snooter' on the top of the port, which a old jet ski/ snowmobile tuner dude who taught me how to port, showed me back when i started porting. His explaination was that it gives the blowdown charge a chance to get flow moving in the pipe without loosing all your cylinder pressure.

yamaha used 2 rings, thin in height but deep in profile, probably 1.25 mm tall with 2.5 or 3 mm depth... in other words high tension and very robust. Chrome plated running in a cast iron bore.

I think if you're runnign one of those higher tension rings you can probably get away with a more aggressive port bore, and maybe incorporate some of the 'tricks' that yamaha used on this DT cylinder.

I do 70% on the regular, and have had to move the ring pin a few times and it worked great every time,

Just like to say....... When using these small drills you should use little pressure cause they can bend as you are going in making the outer end of the hole you are are drilling wider than the hole is more inward. Something best practiced on a trashed piston

2nd that. Aux ports move the power band up 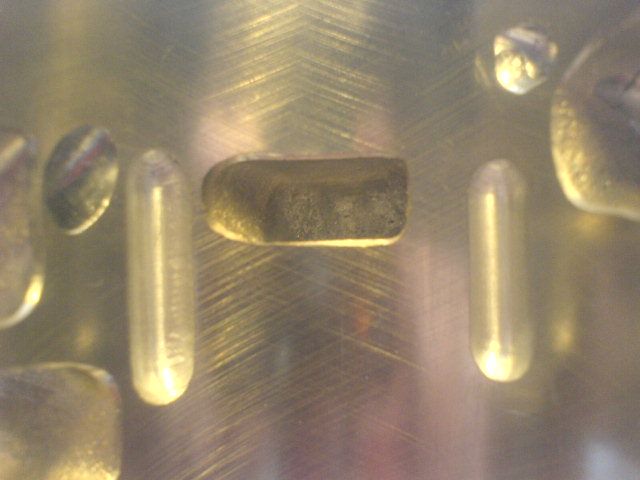 after seeing this DT i'm'a say fuck the baby ports and go as wide as you can, especially if adding aux ports is complicated by stud spacing and cylinder design.

you see a lot of dirtbikes where the Aux ports kinda do the same thing as the 'snooter' ... they are up high and get covered 1/2 way with the power valve. I think they are functioning more to evacuate blowdown gasses and blast the return pulse, and only marginally effective at evacuating the transfer-charged loop scavenge process.

I.e at low blowdown, low exhaust scavenge efficiency, where the loop process is pressure driven by the crankcase, the big open exhaust is more effective, and at high blowdown, where the pipe is driving the process, the aux ports are more effective.

I DO like that when you run bridges/aux ports you can put the lube holes in your piston and keep better cooling contact when the piston drops to BDC. I think that makes a huge difference vs. it running dry from exhaust burning off the oil film at TDC. I'm curious if cutting a couple very small vertical from the case up to, and just short of, the bottom of the exhaust port, would have any positive effect in this regard... it would reduce surface area contact, but it might draw and hold more oil for better lubrication.

or maybe even a little horizontal wiper shelf groove that the piston could expose at TDC... i dunno. crazy thoughts.

I'm still learning a lot about how exhaust characteristics contribute to piston heating on the exhaust side, especially at midrange where the exhaust pulse is reverberating while the piston is still partially covering the port.

This vespa polini motor that i built is seriously making me reconsider some of my long held assumptions about mismatched timing, blowdown, and pipe.

Variated it's great tho.

yeah. that is kinda what i'm thinking too. you don't see them on very many 1/2 speed kits. pretty much vario only. even the dirtbikes i've never seen one that had aux ports without a power valve.

the other thing that adds to this line of thinking, is that the OEM's don't seem to be too concerned with minimizing the bridges between the main exhaust and aux ports. I would think if i was trying to loop scavenge into one large hole with two holes outbound, i'd want as narrow of a bridge as possible to minimize fluid shear going around and into those ports.

lots of cylinders with aux ports they just don't even give a shit, in some of the MHR cylinders they even have transfers right under them, further complicating the loop scavenge flow. Almost like they are there for a totally different exchange process... i.e. the blowdown, then recharge, and totally useless for loop exchange.

Thanks for all the info guys!... but you misunderstood my question, probably my fault, lost in translation...

what I ment was; how wide can I make a transfer port, and still run the ring gap across it without trouble? the ring gap travels over the port.

> lots of cylinders with aux ports they just don't

> even give a shit, in some of the MHR cylinders

> they even have transfers right under them, further

> they are there for a totally different exchange

> process... i.e. the blowdown, then recharge, and

i think you'r'e onto something here, I've seen race cylinders where the main ex port is raised far above the piston top @bdc, allmost all of the exhaust duration is blowdown.

then there's the FOS system by mr. Overmars...

Don't know. I would think you wouldn't want it over a wide port at all.

Personally I don't think I would ever run it over a port. I'd mod the pin first.

Which port is the ring gap running across?

The ring gap is running between the secondaries and boost port, if I cut two additional boost ports, it would run straight over one of them. This should not be a problem, I've seen many cylinders where the gap is running across bigger ports than that. But, widening the existing ports should give more power, if propperly aimed, because of bigger area without the extra "port dividers" 5 transfers vs 7 transfers. Without moving the pin, the gap would slide off center over one off the widened secondaries, this may or may not be a problem...

Just don't go wider than 10mm with the port.

Chamfer kiss the ring ends and top of port.

This one has the 7 transfer configuration, ring gap is passing over the middle booster.

Here the secondaries are humongous, 5 ports, maximized area. Gap is passing over boost port here to. 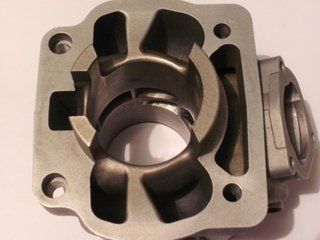 Exhaust is pretty radical on that last one to...

If the rings go 2.5mm/3mm deep in the ring land you can get away with a ring gap in a transfer port 12mm/13mm wide if it's centered.

Some chainsaws use deep rings and have near 80% of the top of the exhaust port flat spinning 13k.

Also, there's not much gas pressure exerted on the ring before the exhaust closes, right?

The rsa cylinder should be a eye opener for the knife-edging-guys!

Any suggestions for a piston for 40mm bore, single max 1mm ring, ring gap centered opposite of the exhaust?

hmm yeah those flat bridges betwen the transfers show up here too: 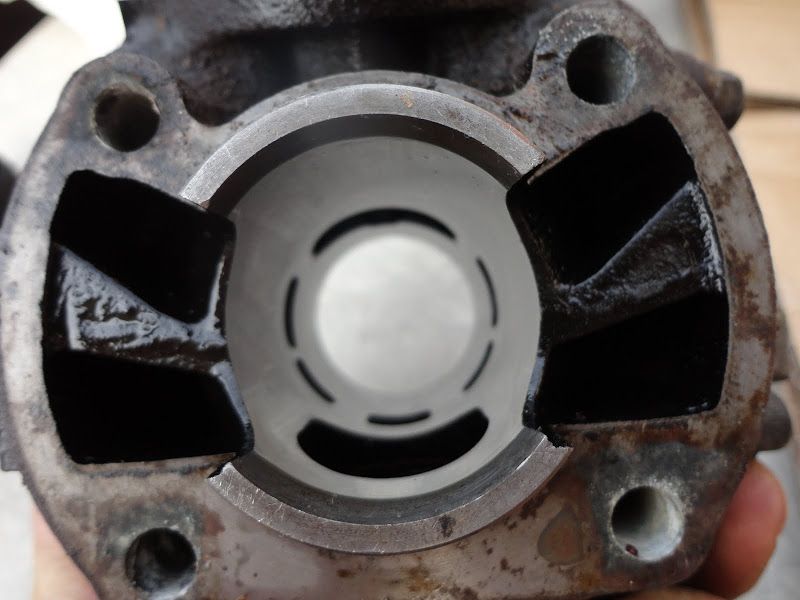 thought it was sloppy casting, but there might be something to that. They easily could have made the patterns slightly bluffed on those edges... that would be the 'logical' thing to do... but they intentionally left them dead flat. 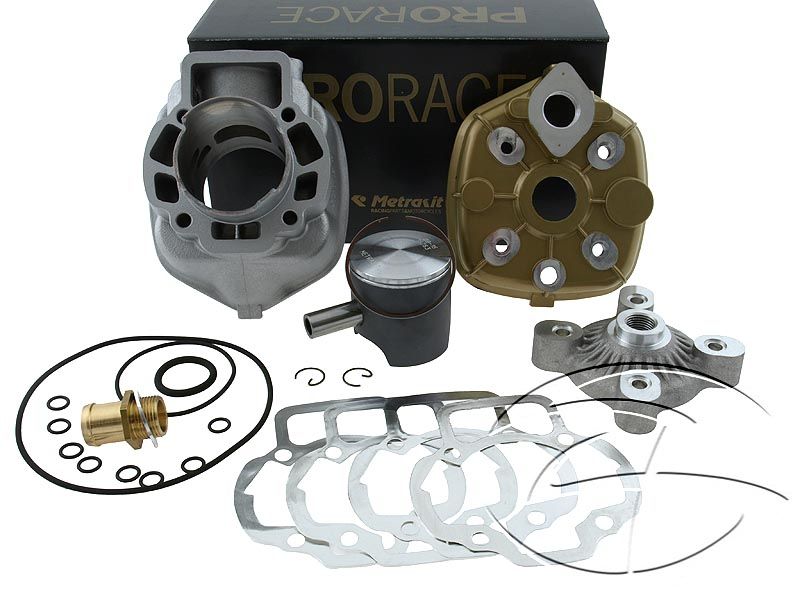