Ive been fooling with my Moby over the last few weeks. Got the slow cylinder ported and decked, it's peak power is right around 9k now. I had it hit lower when my pipe was longer, but i shortened it cuz my goal is to make this into a 50mph ripper on the ported slow 20mph jug. Port map to come soon. Made a launch lever, never had one before. The manual shifting is really fun!

So the only issue I've had is the stock clutch. I modded it by cutting the arms back, and when the pipe hit lower, it slipped great and climbed steep hills from a dead stop aimed uphill.

Now that my power comes on about 1.5k higher, it doesn't slip enough only while starting from a stop on a hill. It performs fine on flats. So I have to pedal up hill til I get to about 5mph to get it to 3k or so then it climbs the hill super fast for a 50cc as long as I hammer the launch lever.

I have an er3 on the way, but I had an idea last night about the stock clutch.

What if the solution to the stock Moby clutch engagement was not modding the clutch itself? Seems to me that if I pulled the engine back a bit at takeoff (by cable or pulling up on the launch lever) and let the belt slip a bit, that would spool it up and off you'd go. Yes, the belt would get eaten up over time, but no more than the er3 eats em. And the A series belt I'm using is cheap cheap cheap.

I'll try it first just by pulling up on the launch lever. Any Moby people do this? I just never thought about pulling the motor backwards to act like a slipper clutch....

how fast you runnin on flats with your set up sounds fun as hell especially when you get that er3!! And did you get your launch lever to work with pedals?

Yep. It was easy. The knob on the lever lines up with the pedal, so I can just rest my foot between them as I shift. I partially copied the cheap $20 lever design from Treats.

It is really fun! Loud though. 19mm phbg, fatty Goped pipe setup like a proma.

The engine won't spool up if you pull up on the launch lever..it's the opposite. Pushing it down keeps you in higher rpms. Pulling it before you get going will suck your rpms down and you won't go anywhere :(

You don't get it.

I'm talking about letting the belt slip just for takeoff. Take off spring tension by cable or lever and the belt will slip a bit and the motor will free rev for a sec, then drop the motor to get tension back on the belt. I'll post a video so you can see it.

Matter of fact, when I had the clutch slipping good, if I pressed the launch lever down the clutch would stop slipping. (edited)

Sweet lever Jbot. I'm working on the same thing with some thick ass aluminum plate I have. Did you use a bearing for the pedal shaft, piece of pipe, or just a hole in the plate steel ?

I used a piece of pipe that was really close to the diameter of the shaft, then used an old hobbit crank bearing just as a spacer and something to weld to.

It's a little too flexible side to side as it's only 1/8 in steel. I'll add a rib or 2 to stiffen it up once I'm happy with everything.

I gotcha...great work...sure beats shoving on your head and almost putting your foot thru your front spokes when you slip...lol

not that I have ever done that of course

That is excellent +++ set up you are working on.

Did you try to use a belt that is slightly too long so it would slip until the rpm is higher?

I'm going to try a longer belt RM. That would really help it slip on takeoff,

But it's controllable via the launch lever. Press down harder to lessen slip.

Btw, I'm running a varplus on this setup now with 11g and it's slightly too heavy so I variate all the way easily. It's more fun to ride that lever anyways. That's what she said.

Try that 17325 i gave ya....it's as close to the stock length belt I could find...and ran great with my varplus setup.

Naw, I want a long belt. Come up here and gimme a clutch!

Much longer and you will have to pull start it...as the will be no tension...OH WAIT!! That's what you are kinda after.......CLUTCH!!! Maybe today?

I'm going to experiment with adding resistance to the shoe springs and possibly expanding the bell with extra steel to make those shoes have to move farther out.

One idea I had was possibly windowing the starter clutch inner bell and putting the main leaf spring shoes on the inside of the mount point instead of the outside as they are now. The only issue with this would be how far the leaf springs can bend without breaking. I dont feel like folks have gone far enough with playing with these stock clutches.

I do want to add a pull start disc too so the starter clutch can go away or get some stronger springs too.

1. Remove starter clutch assembly as much as possible. (all the way to the curved slots)

2. Drill hole thru leaf spring right before the pad begins all the way thru the mount plate too.

3. Mount a small spring with an additional hook to the shoe inside the clutch plate

4. Lastly, add a mount point for the springs on the face of the clutch

I like this idea, it seems that most ideas to get higher engagement involve removing the starter clutch. No biggy. I hate it anyways.

Yep, this is what I'll be doing. 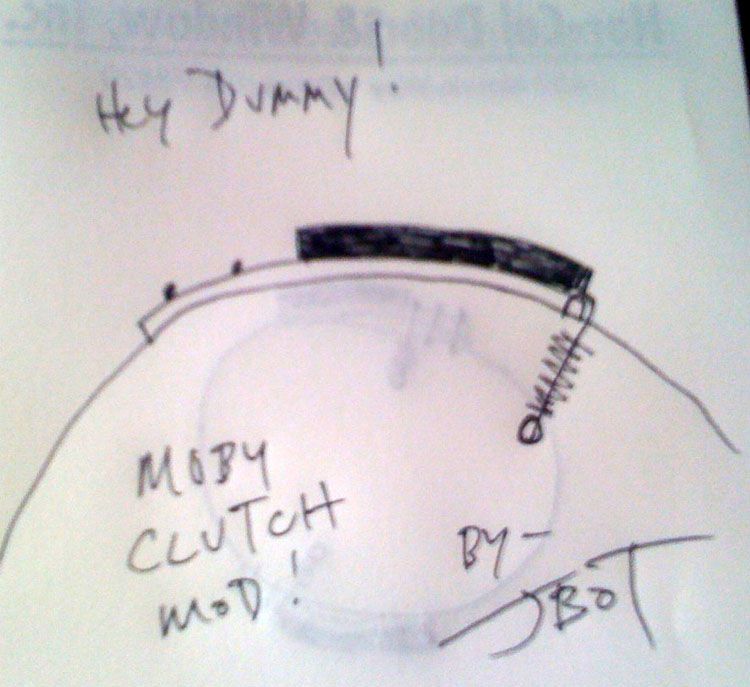 The main clutch springs only move outwards when the spin overcomes the spring rate/weight combination of each little pad. To adjust this you can trim the pad portion (length or width) or you could add a rivet between the second riven and the pad. Adding the riven will increase the tension needed for the pad to life because it will lose mechanical advantage because it will be closer to the pivot point. Adding the rivet will be a bit more of a guestimate but it will allow you to retain full contact width and length of the friction material.

I did the pictured mod today, seems awesome. Have to grind a bolt to 3/8 square to fit the novi to turn the engine over with a drill to test...pics later.

I have a feeling this is gonna be awesome.

I turned down the hub, welded it to the bell (it centers itself by the hub's flange) then added some stock hobbit springs at the ends of the shoes.

Also cut off the vari guides, and welded them to the bell too.

I don't need much tension from the springs, as the stock moby leaf springs will still work, just want to get about double the rpm engagement. The springs will not touch the bell, there's quite a bit of room for wear until the spring can hit. Eventually I'll make a welded hook to the bottom end of the leaf, so it can never hit the bell.

The screws holding the springs are only temporary. I just wanted to test it, but didn't have time today. I'll probably weld something in there, or use hardened bolts/nut and tack em in so they don't move. I can add stronger springs if needed, we'll see if it's needed.

This should now engage like a real clutch... i hope.

By the way, that pipe's weld is actually 3 former cuts and welds. That pipe has been cut up and rewelded so many times... it's got a good transition on the inside.

I havent tested this setup from yesterday yet, but I'm convinced that this clutch bell design is pretty good.

The modded shoes and arms are not the best, but here's the cool thing. I'm thinking that other standard moped clutches would work, the only tricks would be to cut out sections of the outer ring of the clutch plate so any arms inside the assembly can come thru and engage the modified new bell. Adding the swivel pins for the arms in a proper balanced place might be tough with a different design clutch, like a 3 shoe...

Excited to test this mutha today!

Tested! Rules! So much better than it was before. I'll get a video in the next few days. But by now you should just trust that my mods work.

This feels just like a puch clutch now with lightened shoes.

The new clutch setup is much lighter, and it spools right up. I'm going to add some stronger springs next just to see if it can slip to about 5k or higher.

Kicked out my pedal arm a tad, just that was just too close to the clutch plate. Hit the spring bolt heads a tiny bit.

The lever slip idea didn't work with my shorter belt. I'll try a longer one next.

Cut 2 loops off the stock hobbit clutch springs and the stall is perfect for me. I don't want or need a screaming engagement. Just a good amount of stall.

This works fantastic. Anybody who said that Moby clutches couldn't give really good performance didn't try this.

Cost: almost nothing, just some time and a few bolts/springs.

The only trick is to get it started. I ground a bolt to fit into the novi nut in my drill for now. I can kick start once it's warm. I'll make a quick lil pull start disc to bolt to the flywheel or make a pull start adaptor that just pops into the novi nut (2 handed starting)

I'm on the fence about the longterm strength of the hub flange welded to the bell. I'm considering adding in an extra support around the welded hub all the way to the front of the bell. Like a large pipe welded in for added support.

Originally, the starter clutch steel plate extended all the way out to the edges of the bell, and the only thing holding the bell to the plate were those lil flathead screws.

It might not be needed, since once the clutch engages the clutch plate locks into the bell becoming one rigid unit and shouldn't flex much. Most of the forces would be rotational, and in theory the original flange weld should hold up.

Support it more or not? Waddya think?

More support would be better, but try to keep it simple and make a write up on it so maybe others can mod too.